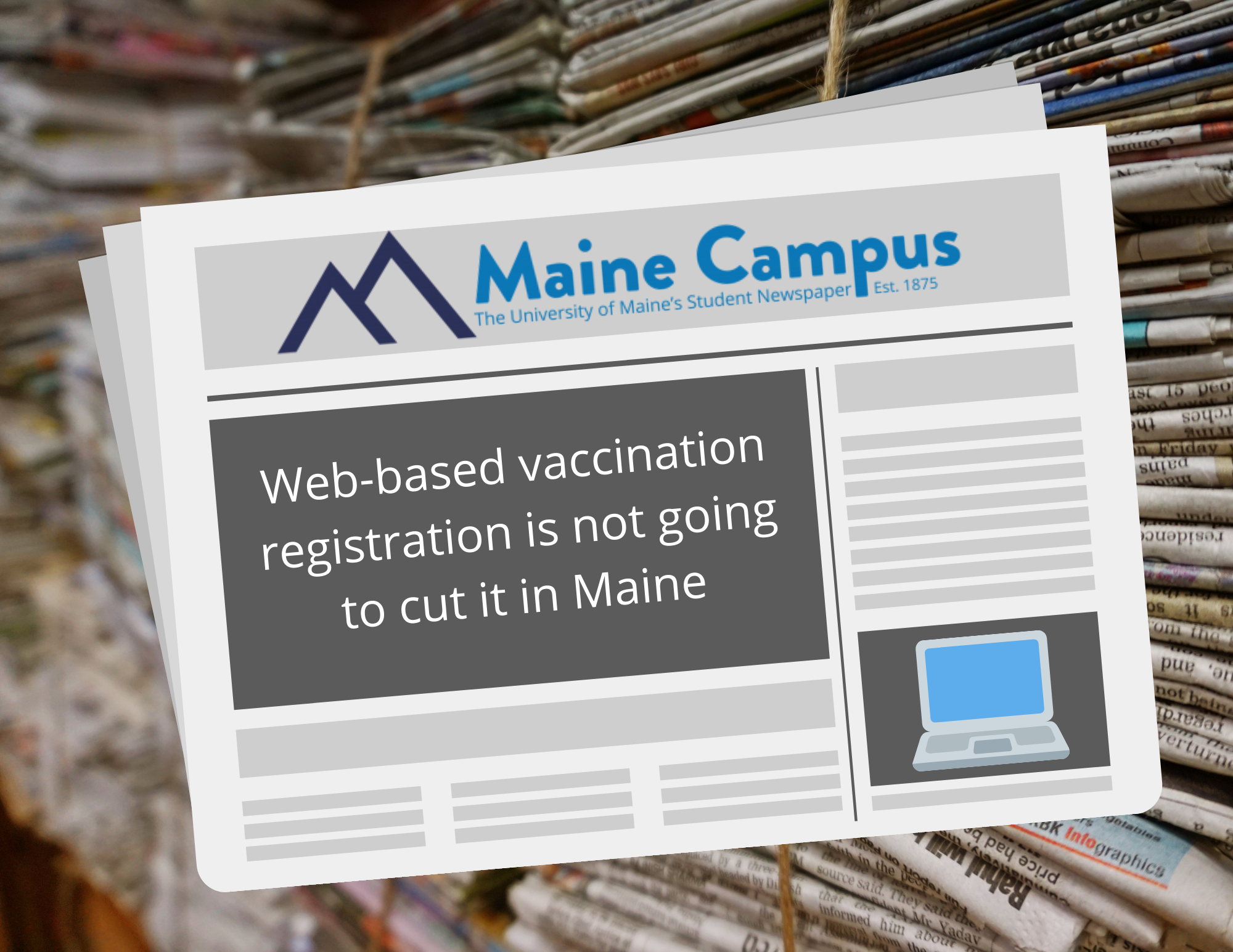 Whenever I go home to see my grandparents, within the hour that I walk through the door I begin receiving requests for help. Typically, they first ask how I am, what’s new, and how’s school — but then the conversation takes a turn, beginning with a question that’s something like, “oh hey, while you’re here, can you help me with this one thing on the computer?” Now, my grandparents are young — in their 60s — and they, like many in their generation, are somewhat inept when it comes to technology. This is an issue that is only exacerbated by age, and given Maine’s notoriously large community of people over the age of 65, it is no surprise that there have been roadblocks in a largely web-based registration system for the COVID-19 vaccine. Maine’s population of older adults is now left trying to navigate an unfamiliar and unintuitive system to get a vaccine that could be the difference between life and death.

This brings to light two issues with the online COVID-19 vaccine registration system that Maine has adopted. The first is that, unlike us college students and even our parents, older adults simply didn’t have computers or the internet as a tool in the formative years of their lives. Thus, their comfort level with this kind of technology just isn’t the same as ours. According to a Pew Research Center poll, fewer than half of adults age 65 or older used the internet until 2012. In 2012, today’s college students were in middle school and already logging onto Facebook.

The second issue is one that may be even more unique to Maine: lack of internet access. This is an issue that has been brought to light as people over the age of 65 have become eligible for the vaccine, and yet have struggled to actually get the vaccine because of the online format.

Maine is not alone in these struggles. The entire country has been faced with difficulties regarding older adults’ challenges with navigating online registration, but Maine’s large population of older adults makes the state a unique example. A 2018 article by the Bangor Daily News explains that Maine was projected to have more people over the age of 65 than people under by 2020 — and 28% of the state would be 65 or older by 2030, bringing it to the highest percentage of adults over 65 in the nation. Combine these statistics with Maine’s vaccination rollout plan, and it seems obvious that it’s a recipe for disaster. The plan targets adults 70 and older first, but it also relies on online registration, requiring many members in this group to not only be well-versed in internet technology but also to have reliable internet to begin with — which tens of thousands of Mainers don’t, according to News Center Maine.

These are issues that the entire country is facing, but with our vast expanse of broadband-less rural areas combined with our large population of older adults, Maine seems to have gotten the short end of the stick. Processes are already underway to combat this issue, but until then, check in on your parents, grandparents, great aunts or sweet neighbors, and make sure they have the resources that they need in order to register and get the proper information about vaccinations.

UMaine and UNH Cooperative Extension programs host winter gardening workshop
Back in Black Bear Nation: How the return to campus looks for Spring 2021