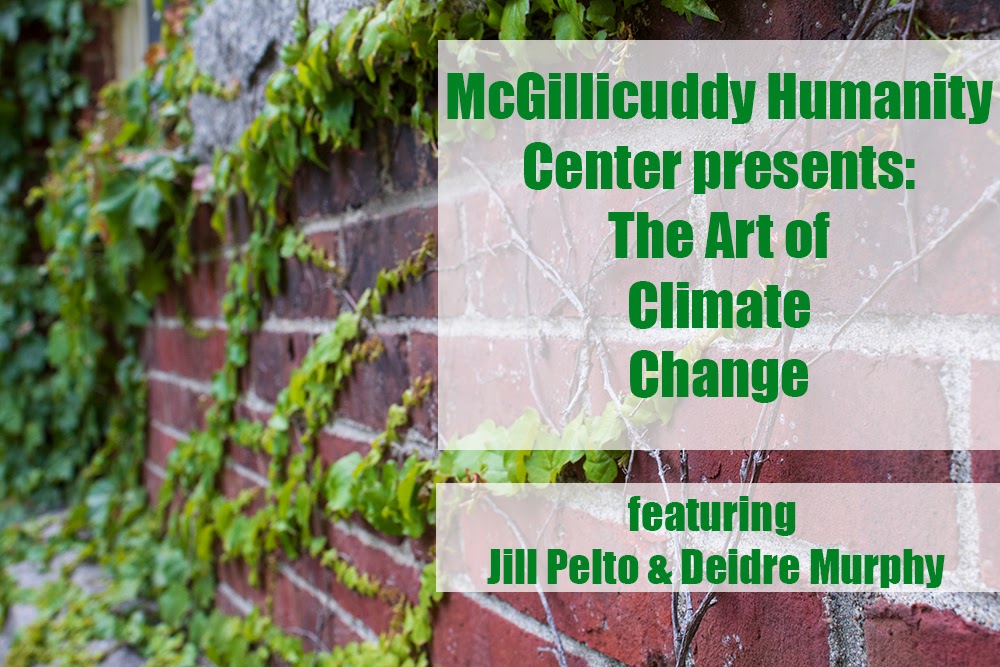 On March 10 from 7:30 to 8:30 p.m., the McGillicuddy Humanities Center featured artists Jill Pelto and Deirdre Murphy in their presentation “The Art of Climate Change.” Both artists have found a new way to communicate climate change through more than just scientific data reports, but also by artistic expression.

Pelto is a climate scientist and artist who focuses on communicating human-environment connections to the public. She is based in Westbrook, Maine, and her artwork primarily consists of watercolor paintings. Pelto is well-known for her fieldwork in the glaciers of Washington and the Transantarctic Mountains, and especially for one of her paintings appearing on the July 2020 TIME Magazine cover.

Pelto’s watercolor paintings incorporate climate data, making the data more visual, emotional and easier to get its point across about what is going on with climate change.

“My art reflecting science really started when I was doing science field work,” Pelto said. “So, I would bring supplies with me into the field and create paintings that captured what was in front of me. I found in those moments my process was observing the landscape and really thinking about what changes I saw, what the ice was doing in a location or how the plants had changed their growth season that year, and I would be taking those moments to really pause and observe the environment.”

Pelto takes her fieldwork data and weaves it into the landscapes. One painting features the data line creating the peaks and shape of the glaciers, showing how the glaciers have become smaller and smaller. Another painting includes data running right through a boat and the surface of the water, indicating the rapid variations of the temperature of the ocean’s water. Pelto even makes sure to include sea animals in her paintings that are from the specific area the data was recorded.

“I chose species in this painting based on stories here in Maine,” Pelto said. “The fish are cod and I have them disappearing across the painting as they’ve been overfished in Maine to the point where you often are no longer allowed to fish them. I chose shrimp who are also often overfished. Lobster who are sensitive to temperature and have an uncertain future in the Gulf of Maine despite their importance here. And then in the sand are soft shell clams that are burrowing in which are very susceptible to changes in ocean chemistry.”

Murphy, the second climate artist featured in this event, decodes the interconnected patterns that exist in art and science by creating biological patterns and data visualization in her paintings. Murphy is well-known for her work being exhibited at the Philadelphia International Airport, Palm Springs Museum of Art, Zillman Art Museum, Biggs Museum of American Art, New Bedford Art Museum and Tacoma Art Museum. She has conducted research that has led her to art residencies at Integral Molecular Biotech and Winterthur Museum.

Pertaining to her current exhibit featuring climate change work, Murphy recalled consulting with ornithologists, behavioral biologists and cartographers during her beginning stages as an artist, collectively accounting for 15 to 20 years of work and research which led her to create multiple relevant works. In many of her paintings, Murphy has focused on bird migrations in response to climate change. One of her paintings features songbird migrations, including the Atlantic Flyway, a major flyway for migratory birds in North America.

“Looking at how I can utilize scientific data to express the changes in bird migration is the beginning of my journey,” Murphy said. “‘Winds of Change’ was an exhibition I had in Philadelphia and I worked with Hawk Mountain Sanctuary on this one. I wanted to really try and educate the viewer to see the crisis of climate change and global wanting but I wanted to do it through the hook of beauty and that narrative that wouldn’t be kind of finger-wagging and make people feel the intense negativity that indeed is there, but to take the colors and the beautiful bird forms and images and hook the viewer with the beauty and then softly educate them with this climate change awareness.”

Both artists have created inspiring works of art that allow the public to see science data in another form — a more communicable and emotional form. To find out more information about Pelto and Murphy’s artwork, you can find their online galleries at www.jillpelto.com and www.deirdremurphyart.com.

Maine should bring back its original flag
National Holidays: March 15 through 19