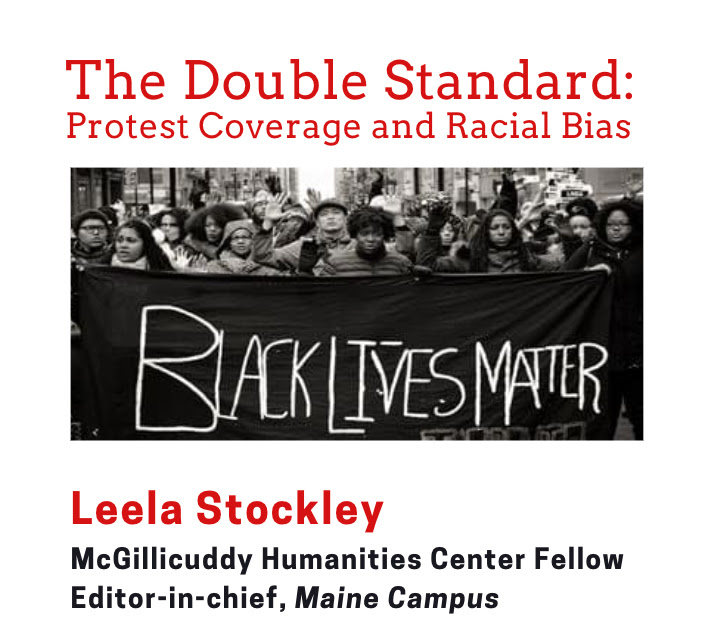 On Feb. 24, McGillicuddy Humanities Center (MHC) Undergraduate Fellow Leela Stockley presented “The Double Standard: Protest Coverage and Racial Bias,” which covered her research on racial bias in relation to the recent Black Lives Matter Protests. Stockley is a fourth-year journalism and anthropology student and a prospective graduate student at the University of Maine.

After an introduction by Karen Sieber, Stockley’s presentation detailed a culmination of over a year’s worth of research into media and journalist behavior in the mediascape within the context of the current Black Lives Matter protest coverage. The presentation noted the opportunity the McGillicuddy Humanities Center provided by allowing an avenue for in-depth intersectional research.

Stockley combined her interests in journalism and anthropology by focusing her research on determining the context and framing of mass media with relation to diversity and inclusion within the newsroom. This was exemplified by a discussion of news headlines, both in smaller community press and in larger publications, as reactions to events during the Black Lives Matter movement.

“It is an important aspect of research as an academic. By going through all of my undergraduate work, I have learned a lot about the value of bringing in various perspectives and being able to talk about why they are important to how we are approaching what we’re studying,” Stockley said.

Stockley said she was drawn to focus on the Black Lives Matter movement as it has existed since 2010, serving as a long-standing basis for conversation surrounding racial bias and conceptualizing the protest paradigm. She noted the importance of learning how journalists may use delegitimizing language when framing both protest and general racial coverage as a whole, which helps to contextualize recent social justice issues and in shedding light on holes created by biased coverage.

During her presentation, Stockley brought forth recommendations for approaching apparent news bias, discussing strategies on how to consciously engage when consuming media involving social justice issues by providing a checklist framework that aims to combat media bias and understand charged headlines by dissecting framed narratives. Stockley noted that this awareness is especially relevant when the diversity of newsroom populations do not proportionately match the communities they serve.

Stockley’s talk ended with a brief Q&A session reiterating varied frames between local and larger news with an emphasis on local news being a more reliable source of information as well as using local op-ed sections to build a general framework of what some community voices may look like among the general front-page content.

The MHC will be putting on a number of series of events throughout the rest of the spring semester, as they continue to fund student research and promote events centered around humanities on campus. The next event will take place on March 10 at 7:30 p.m. called “The Art of Climate Change” featuring Maine-based artists Jill Pelto, Deirdre Murphy and Laura Helmuth, editor-in-chief of Scientific American, who will discuss ways art transcends scientific incorporation in public engagement.

As posted on their Facebook and Instagram pages, the MHC is looking for applicants for both the upcoming spring/fall and fall/spring semesters. When selected, MHC fellows are awarded $8,000 across two semesters to research a topic of their choice, as a part of furthering student interdisciplinary skills and supporting meaningful dialogue between a broad landscape of humanities platforms and resources both at UMaine and beyond.

For more information on the application process as well as general information, please visit their website or social media pages to stay up to date on current events and opportunities.