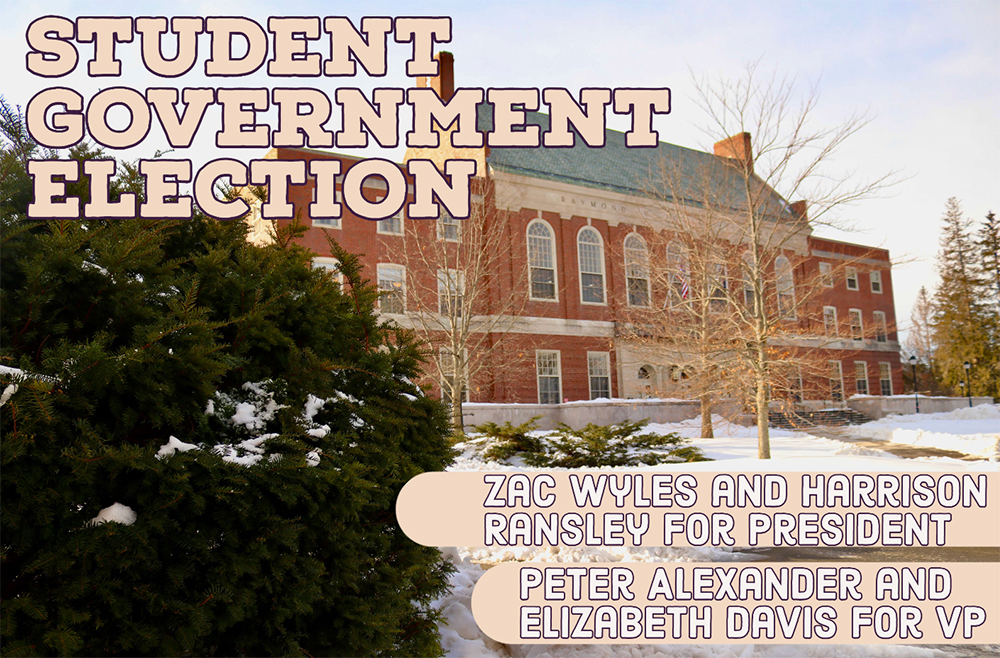 Elections for the University of Maine Student Government are set to take place on March 22. Students will be able to vote between 9 a.m. and 5 p.m. via their university email account.

Ransley is a fourth-year political science student. His vice presidential running mate, Davis, is a third-year political science student who is involved as a co-chair of the UMaine Feminist Collective. Davis is also currently serving as vice president of the UMaine Pre-law Society, is a drug policy research fellow and a sweetheart at Alpha Tau Omega.

Ransley and Davis are focused on the key issues of strengthening student rights, representation, and resources around campus. Their platform points include better mental health resources for students, protection of student rights in interactions with police, providing a wider array of dining options for students with dietary restrictions, and increasing student involvement in dormitory programs among other points.

“We are looking to help create a system wide, student led committee for direct representation on system issues,” Davis explained.

She also elaborated on some of the ideas they plan to introduce to strengthen mental health services, such as “looking into pass fail options and supporting 24/7 call lines.”

Davis expressed that they are looking into proposing amendments to the Student Conduct Code in order to promote a more just and equitable judicial process. Another key issue of their platform is strengthening student involvement in academic planning committees, so that student interests are supported by academic rules. Ransley and Davis hoped to promote interests such as extending pass/fail deadlines in times of crisis, as well as extending add and drop periods.

Wyles, who is a third-year political science student, and current vice president of UMaine Student Government, is interested in similar issues of student representation in academic planning.

“This election is an especially important one, since we are making some big academic changes, such as presumably returning to full in-person education in the fall. At UMaine, I would say the issues of student mental health, preparedness for classes, and students’ right to be heard are the biggest priorities for my campaign,” Wyles said. Wyles spoke to the importance of this year’s race. The key issues of making UMaine a safe and healthy environment for a potential full return to campus in the coming fall are at the forefront of his concerns.

Wyles is running alongside his vice presidential selection, Alexander, who is also a third-year political science student. They intend to introduce some potential changes to student life at UMaine.

“Some of the big changes we hope to bring to campus include the following: Two-week add period to match the drop period, textbook affordability options and transparency, syllabus banking and maintaining strong connections with the student body, which has been hard to do during COVID and must be done in the fall,” Alexander said, emphasizing the importance of continual conversation with the student body of UMaine.

Wyles focuses heavily on listening to the experiences of his fellow students. He is involved in student government, and works part-time.

“My focuses, then, are less on my own experiences with clubs and more centered around creating an opportunity for others to bring their own experiences to the table,” Wyles said on his involvement around campus.

With the potential upcoming return to in-person classes in the fall, and changes happening around the University of Maine System, the importance of communication between the student body and the university has never been more important. The focus on ensuring the health and safety of the student body, and ensuring that the voices of students are heard are front and center in this year’s student government presidential election.