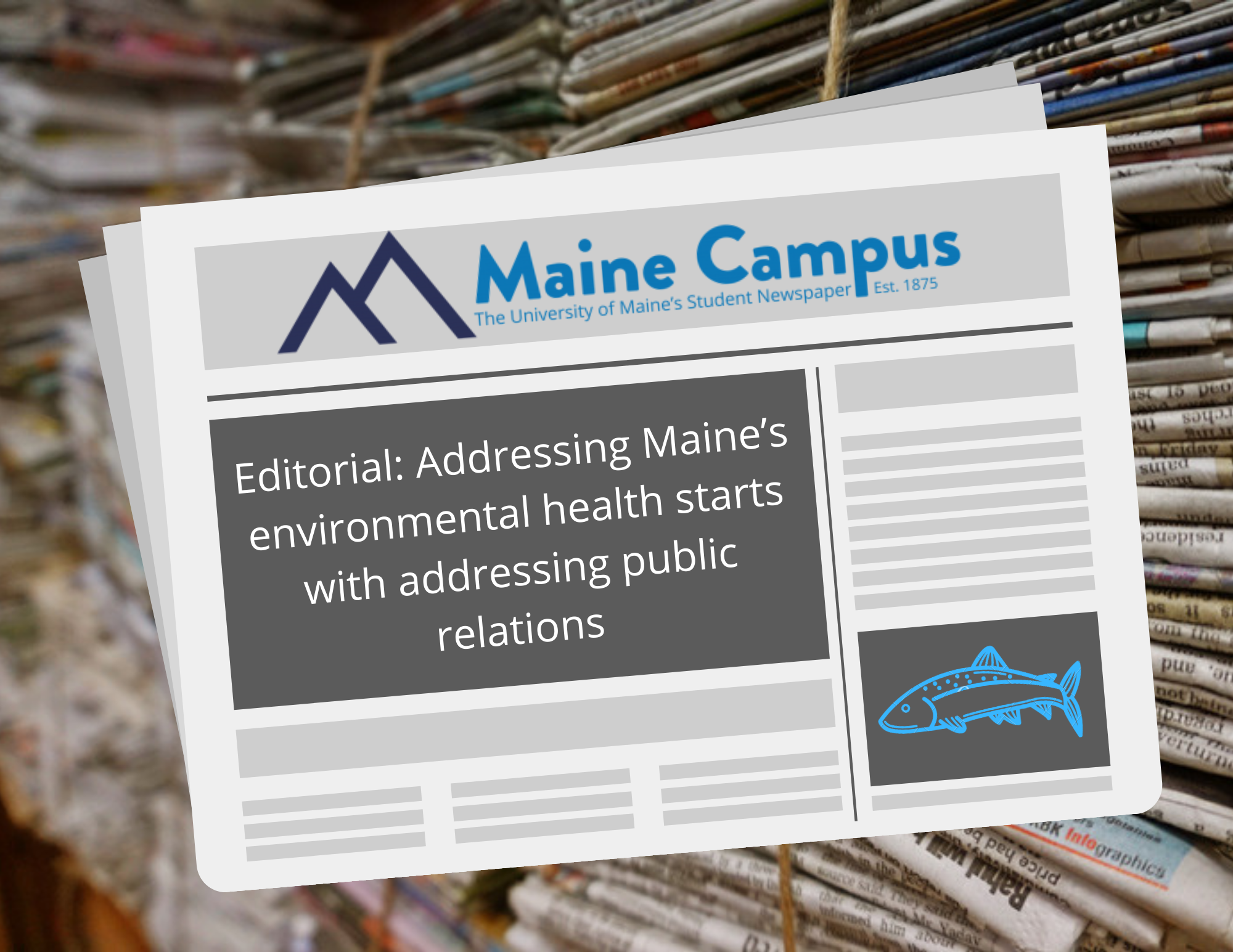 Maine’s history is, quite literally, embedded in the landscape. Riverbanks are dotted with mills, and over 1,000 dams fill the rivers that once powered the industrial hearts of many towns. Environmentalists and agencies determined to remove dams and “restore” rivers must contend with communities who often have a very different idea of what restoration looks like.

Of the 107 dams that continue to generate hydroelectric power, there are four that ostensibly stand between a critically endangered population of Atlantic salmon and a vital spawning ground on the Sandy River, a tributary off the Kennebec River.

While Atlantic salmon off the coast of Canada and Europe persist, Maine’s distinct population segment (DPS) of the species is listed as endangered under the Endangered Species Act due to damming of its spawning habitat, pollution and commercial overfishing into the mid-20th century. According to the National Oceanic and Atmospheric Administration (NOAA), Atlantic salmon are considered a “canary in the coal mine” as the health of their population generally signals the overall health of an ecosystem.

With the goal of facilitating access to the Kennebec north of Waterville for Atlantic salmon and other sea-run fish, Maine’s Department of Marine Resources (MDMR) recently proposed a sweeping amendment to the state’s management plan for the Kennebec River which would have recommended and likely instigated the removal of at least two of the dams along the river.

The four dams between Waterville and Skowhegan, the Lockwood, Hydro-Kennebec, Shawmut and Weston dams, are all owned by Brookfield Renewable Partners, part of the Toronto-based Brookfield Asset’s $600 billion portfolio. Brookfield sued MDMR in early April, and the department retracted the proposal soon after, recognizing that they did not have the legal authority to institute the amendment.

While the amendment’s removal is a seemingly significant blow for environmentalists eager to revive the Atlantic salmon DPS as soon as possible, the situation also presents MDMR with an opportunity to go back to the drawing board with their public engagement strategy for the proposal.

According to the Bangor Daily News (BDN), nearly 1,100 individuals submitted comments in response to the proposal, something that MDMR Commissioner Patrick Keliher says is unprecedented. He told the BDN that the agency will more actively seek out input from stakeholders in the communities around the dams in question as they continue to pursue these changes.

The fact that Keliher was surprised that stakeholders responded so strongly to the proposal is likely an indication that something was missing in the development process of the amendment. Beyond avoiding additional legal snafus, stakeholder engagement will likely be the key to the department’s success.

Local residents can often be the wrench that ultimately foils a dam removal. Research conducted at the University of Dartmouth and published in Geoforum in 2016 found that while the majority of dams in New England are relatively small, costly to repair and provide little in terms of economic benefit, local residents will often fight to preserve and repair them as historical landmarks with significant sentimental and aesthetic value for their towns.

According to the Dartmouth researchers, one staff member of the Vermont Council of Natural Resources remarked that the Warren Dam in Warren, Vermont, while not representing any practical value to the town’s residents, is considered vital to the town’s character and beauty.

“[It] is the poster child for dams that, even though it should come out, it’s a dam you don’t want to take out because it’s on the town seal. Rule 101 of dam removal is don’t go after the dams that are on the town seal…They want to keep it as part of their culture and history,” the staff member said.

Additionally, researchers found that much of the local opposition to dam removals is also rooted in resentment towards regulators and government officials who exercise their power over local resources and landscapes without regard for those who see those places as part of their town’s identity.

While MDMR may have asked for public comment on the proposal, it does not seem as though they made any concerted effort in involving stakeholders in the process of creating the proposal in the first place, a now obvious misstep. Some state senators, representing the municipalities that benefit from the property taxes that Brookfield pays for the dams, have come out against MDMR for this very reason.

With all this said, there is no denying that the most effective path forward for getting Atlantic salmon into the Sandy River is by removing at least two of the dams. Brookfield has proposed simply updating all of the dams with new fish passages, but conservationists argue that negotiating four fish passages in a row would be nearly impossible for the salmon.

However, a combination of fish passages and dam removals could meet the criteria for a solution that satisfies stakeholders and environmentalists. The restoration of the Penobscot River resulted in the removal of the Great Works Dam and the Veazie Dam in 2012 and 2013, in combination with a fishway around the Howland Dam in Bangor and a new fish lift at the dam in Milford. This effort saw alewives and other sea-run fish return to parts of the Penobscot they had not seen in over two centuries.

In other words, at the messy intersection of a highly valued endangered species, environmentalists, stakeholders and a $600 billion Canadian asset empire, there is a path forward to restoring the Kennebec River. However, the first step for the leaders in the process is going to be not only letting the people that care about these dams speak, but making them feel heard.