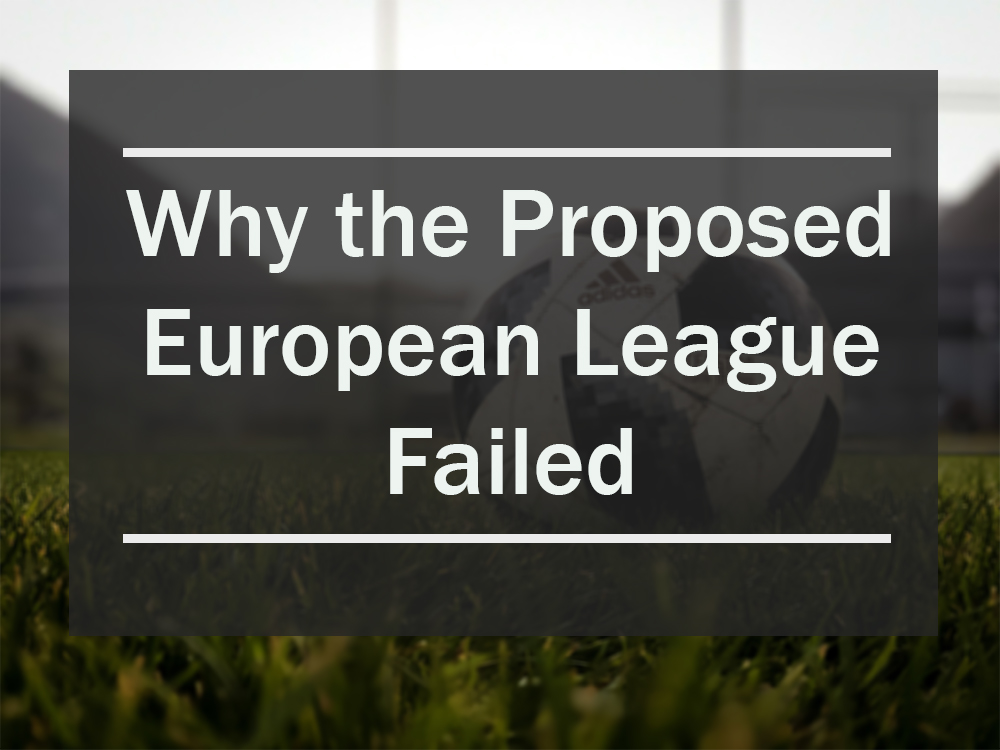 This past week was a chaotic one in the world of European football. On April 18, 12 of the biggest clubs in Europe announced the creation of the Super League, a semi-closed competition in which participants would compete against each other. To outsiders, this may sounds like a great idea, as spectators could see powerhouse clubs face each other more consistently.

However, the proposed idea quickly came under nearly unanimous criticism as the Super League was nothing more than a cash grab by the owners of these clubs.

On April 20, Manchester City and Chelsea were the first two clubs to formally withdraw from the Super League, less than two days after its announcement. This withdrawal occurred after immediate and immense backlash. Fans protested in the streets outside of their clubs’ stadiums. Players, managers, media personalities and many other famous people in the world of football openly criticized the move. Most football fans hated the proposition of the Super League. Officials from football’s governing bodies, UEFA and FIFA, lambasted the proposed league and threatened severe sanctions against participating members, ranging from point deductions, financial penalties and bans from tournaments such as the World Cup. Within days following the announcement, all but two of the 12 teams had abandoned the Super League, leaving it effectively dead in its tracks.

For a lot of Americans it is hard to understand why this did not work. In European football, there are a few fundamental differences to American sports. American professional sports leagues operate within a closed system. This means that the status of a team in the league is guaranteed. For example, the Patriots are guaranteed a spot in the NFL every year.

This is not the case for European football. In the English Premier League, every year the bottom three clubs in the standings are relegated to the second tier of English football, a league known as the Championship. These three relegated clubs are then replaced by the top three League Championship clubs. The bottom three clubs of the League Championship are relegated and replaced by the top three clubs of the third tier, and so on. This means that theoretically any club in England can work their way up to Premier League status. This system is used in all major European leagues.

European football rewards those that finish at the top of the league. In the English Premier League, the top four clubs in the standings at the end of the season can earn the right to play in the UEFA Champions League. Finishing in the top spots in any first division league in Europe earns you the opportunity to compete in the Champions League. So big clubs do have an opportunity to play each other in the grand scheme of things, but just like maintaining a spot in their leagues, they have to earn it.

There has been a new wave of American owners in the Premier League who also own American sports teams. Stan Kroenke, the owner of the Los Angeles Rams, is also the owner of Arsenal F.C., one of the 12 Super League teams. The Boston Red Sox owners are a group of Americans, known as the Fenway Sports Group, that own Liverpool F.C., another club that tried to join the Super League. These owners and groups want financial stability and as such do not like the idea of relegation. However, all of the Super League clubs are at very low risk for relegation due to the disproportionately massive amounts of money they have available to invest in their clubs.

The owners of the English Premier League clubs that attempted to join the Super League were not content with that either. In English football there is a notion that a “big six” exists –– Arsenal, Chelsea, Manchester City, Manchester United, Tottenham and Liverpool. These clubs are the six biggest clubs in England, and historically have topped the English standings each season. All have massive stadiums and budgets, compete to sign the biggest players and strive to compete in the Champions League to reap the big payout that comes with earning the qualification. However, there are only four spots for English teams in the Champions League. This means that qualifying is not a given, and is far from easy. And should a pesky startup like Leicester City or West Ham United earn one of these four spots, the big clubs would face significant financial losses from missing out.

As of right now Leicester occupies the third spot, and West Ham is in fifth place.

To neutralize the threat of non-qualification and financial loss, the owners of the “big six” clubs decided to team up and join this proposed Super League so they are guaranteed the revenue streams of big matches every year. The Super League would have allowed other teams to qualify with the threat of relegation, with the caveat that the 12 founding clubs would be immune to relegation.

The other six Super League members consisted of three clubs from Italy and three from Spain. Both the Spanish and Italian domestic leagues award four Champions League spots. Due to the lesser competition in their leagues, it’s rare for any of these six clubs to fail to qualify for the Champions League. So why did they join the Super League?

The simple answer is money.

Barcelona and Real Madrid, –– two of the three Super League clubs from Spain ––  are in massive amounts of debt and hoped a new, lucrative league could dig them out of their self-created holes. Their reckless spending and poor management makes the Super League an appetizing proposition; it would have been a quick fix to solve some of their debt. These two desperate clubs are the only clubs that have not formally pulled out of the Super League to date. =

The Super League would generate massive amounts of money for the participating clubs in it and create a monopoly for them. The TV deals, sponsors, and all the big money around the sport would go funnel back into the Super League. However, the league would in turn siphon revenue from participants’ domestic leagues.

A Super League would cause a trickle-down effect that would devalue clubs in the top division of each country. With all media focus on the heavyweight match-ups of the Super League, big clubs and spectators alike are disincentivized from caring about domestic competitions within their countries. In turn, domestic sponsors, TV deals, tickets and everything else would lose value as a result of the decreased competitive intrigue. This would ultimately really hurt smaller local clubs who were already struggling financially because of the pandemic.

This trickle-down would affect the lowest-level clubs too. Lower-league clubs in Europe rely on money generated from the highest leagues to survive. For small clubs, the matchday revenue from facing a big team helps create the infrastructure for developing young players and covering expenses.

Many smaller clubs would go out of business, causing jobs to be lost for many in each of these countries.

In simple terms, this is a “rich get richer” scenario which could cause poor teams to get poorer.

Fans of all the big clubs realize the value that smaller leagues and clubs bring to the game of football, which is one of the many reasons why this outrage occurred.

As of right now, Real Madrid’s owner is still trying to keep the Super League alive, but the move seems desperate. The Super League will not happen anytime soon because the fans stood up for themselves in a huge win for the common folk against the big billionaire businessman.