#YouMaine: Second-year student focuses on friendships, growth and her love for journalism during the pandemic

Home /Campus & Community, Culture, Profiles/#YouMaine: Second-year student focuses on friendships, growth and her love for journalism during the pandemic 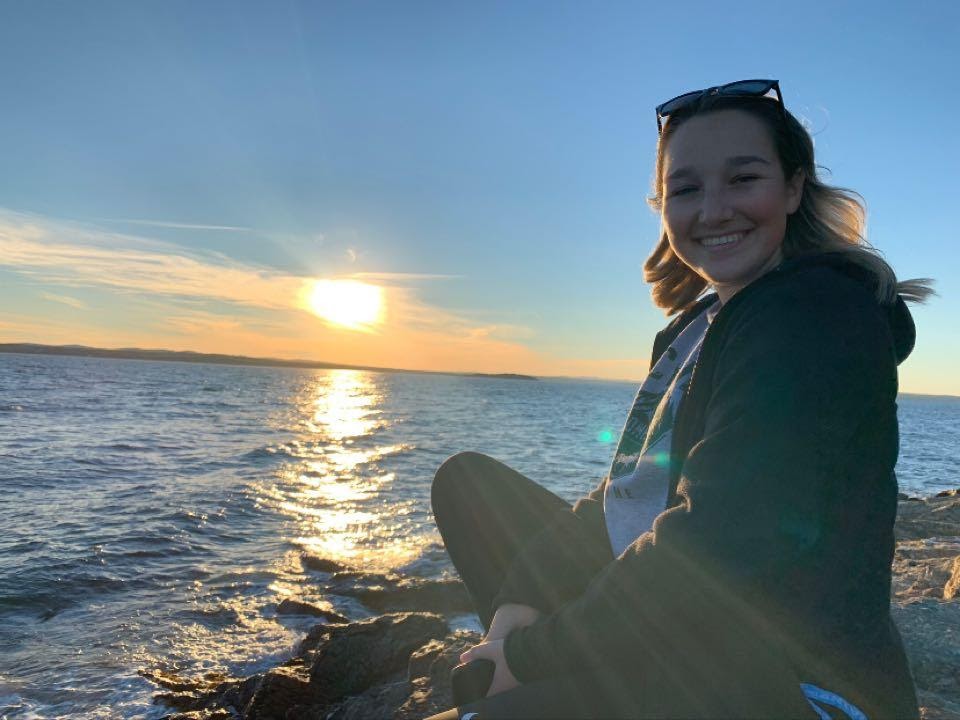 Second-year University of Maine student Grace Blanchard is just about halfway through her undergraduate studies. Even amidst the ongoing pandemic, she is finding all the positives she possibly can to make the best of her college experience. She only experienced one full semester of college here at UMaine before COVID-19 made its appearance and changed everything.

Maine has always held a special place in Blanchard’s heart, as she grew up in Orrington, Maine and now resides in Orono. To her, growing up in such a tight-knit community is something that she will always be appreciative of.

“I’m very grateful that I got the opportunity to grow up in Maine just because it’s such a warm and inviting place,” Blanchard said. “It’s such a quiet and clean and beautiful environment. I didn’t have a lot of houses next to me where I grew up, there was just a bunch of land behind me so it was never super loud and I got to just enjoy the nature around me.”

Blanchard attended John Bapst Memorial High School in Bangor, Maine before getting accepted to the University of Maine for her undergraduate studies. She is a journalism student, who is also working toward a minor in political science. Ever since she had the opportunity to attend a conference while still in high school, the experience truly inspired her. From then on, she knew that journalism was exactly what she wanted to do for a career path.

“I knew I wanted to do something in the writing field, but I had no idea what,” Blanchard said. “Then, when I was a junior in high school, I received a letter inviting me to a national student leadership conference in Washington, D.C. I had never been far away from Maine or my family before and this was a nine-day camp at American University. I decided to take the risk and those nine days of exploring the world of journalism and media made me fall in love with it.”

Now, at the University of Maine, Blanchard is becoming more and more excited for graduation so she can get out and step into the field of journalism. For the time being, she is making the best out of her time on campus while the pandemic still lingers. For her, COVID-19 has actually benefited her experience living on campus.

“It’s interesting for me because COVID-19 was a positive thing,” Blanchard said. “It brought me my closest friends. My freshman year, I very much secluded myself. I didn’t get out much and I was always in my dorm because I felt like I hadn’t found the right people yet. Post-pandemic, though, I found my best friends and my people now.”

To pass the time until graduation, Blanchard works in a coaching position for her high school’s tennis team that she used to play on. Before the pandemic hit, Blanchard was a member of Club Tennis at UMaine for a semester and a half. She is also an employee for UMaine working at the COVID-19 testing sites and will soon be working at the UMaine bookstore.

As for her plans after she graduates from the University of Maine, Blanchard hopes to attend  American University to study for a master’s in journalism and public affairs.

“I fell in love with American University when I studied there during the nine-day intensive program and I just knew that one day that was the place where I wanted to be,” Blanchard said. “One day, when I started looking into graduate programs, I came across American University and their program was exactly what I was looking for. My gut was telling me their program, which only takes around or a little over a year to complete, was quick, intensive and perfect for me.”

Overall, Blanchard’s love for both writing and news is what is driving her to her ultimate goal to become a reporter and write for a newspaper. As a reporter in the near future, she wants to focus on reporting hard news.

“I love hard news,” Blanchard said. “I love being able to report the facts.”

There is no doubt that Blanchard’s love and passion for journalism will only continue to grow from here on out.