Maine football picks up first win of the season 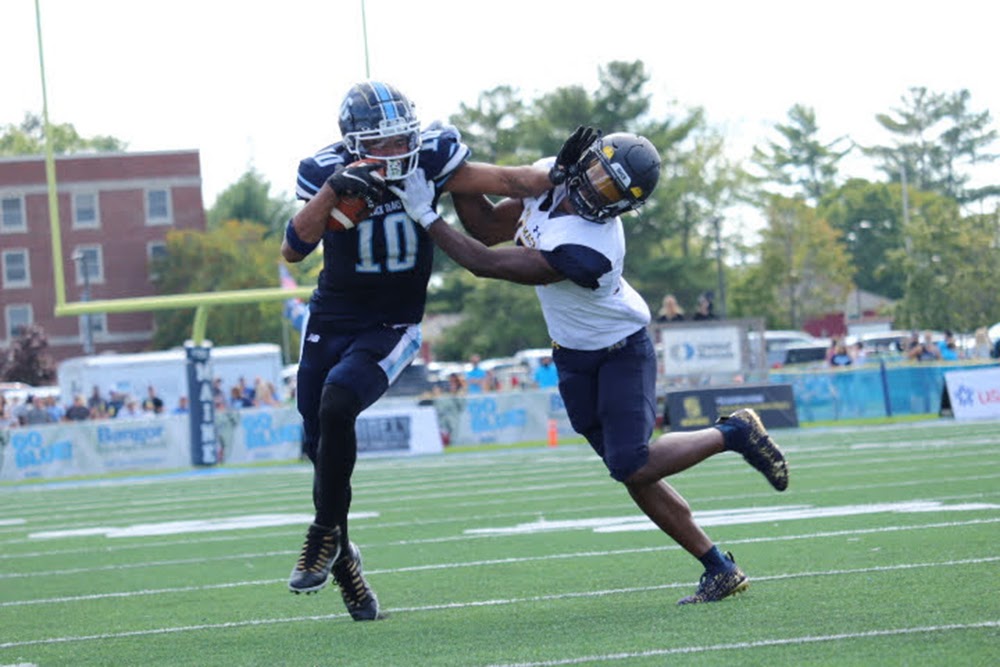 On Saturday afternoon, the University of Maine football team beat Merrimack College to pick up their first win of the season. “It was sloppy,” said UMaine Head Coach Nick Charlton in the postgame press conference. Nevertheless, a win is a win, and Coach Charlton stressed the importance of getting the first win. “We felt like we just needed to get one,” he said.

One possible reason for UMaine’s “sloppy” play was the absence of third-year quarterback Joe Fagnano, who suffered a right ankle sprain against James Madison University last week. He will miss the next few games. Second-year quarterback Derek Robertson stepped up for his first career start at the collegiate level.

Robertson showed that he was capable of managing a game at the college level. UMaine went with a run-heavy approach, with 36 rushing attempts compared to only 23 passing attempts. Robertson did not turn the ball over, and he threw for 141 yards and one touchdown.

The game started out with UMaine’s defense forcing a fumble on Merrimack’s first drive. Second-year linebacker Xavier Nurse jarred the ball loose at midfield, and UMaine recovered the ball. Robertson then led the UMaine offense into the red zone. Fourth-year running back Elijah Barnwell finished the drive off by punching in a 2-yard touchdown run.

Merrimack then fumbled again on their second drive, this time forced by UMaine second-year defensive back Shakur Smalls. The Black Bears also capitalized on this turnover, this time with a field goal by fifth-year kicker Jonny Messina. UMaine led 10-0 after the first quarter.

Merrimack responded with a good offensive drive, led by second-year receiver Jacari Carter. On the day, Carter totaled a game high 18 receptions, four of which came on this drive. First-year running back Victor Dawson then scored for Merrimack on a 1-yard rush to make the score 10-6.

Merrimack failed to take momentum, though, as UMaine fourth-year defensive back Rich Carr blocked the extra point attempt which first-year defensive back Kolubah Pewee Jr. returned 75 yards for a 2-point conversion. This made the score 12-6 in favor of UMaine.

Merrimack remained in the fight despite these mistakes and forced UMaine to punt on the following drive. A good punt return by Merrimack resulted in their drive starting in UMaine territory. Carter would get his first touchdown reception to give Merrimack their only lead of the day, 13-12, around the halfway point of the second quarter.

A 51-yard kickoff return by fourth-year receiver Devin Young set up UMaine for a drive that would stall out, but a second field goal by Messina restored the Black Bears’ lead, 15-12. UMaine then forced a three-and-out, and a bad punt by Merrimack led to a good field position. UMaine drove down the field and second-year running back Freddie Brock made two back-to-back positive plays, the second a short run resulting in a touchdown to give UMaine a commanding 22-12 lead.

Merrimack quickly struck back with a 54-yard kickoff return that set up a 5-play drive, resulting in Carter’s second receiving touchdown of the day. This touchdown would make the score 22-20, UMaine leading at the half.

UMaine’s offense would strike early in the second half. Robertson would find an uncovered Brock down field for a 59-yard touchdown pass to put UMaine up 29-20, Brock’s second touchdown of the day.

After a UMaine punt, Merrimack marched down the field and scored a touchdown to cap off a drive that started from their own 29. This cut the UMaine lead down to three, but Merrimack would make another costly mistake. For the second time in the game, Carr blocked an extra point. “All week in practice we really emphasized, like that, we go hard enough we can block a field goal,” said Carr. This time Carr returned the blocked kick himself for another UMaine 2-point conversion, extending the Black Bears’ lead to five.

Merrimack – down by five late in the fourth quarter with time dwindling – had to get a touchdown to win. Starting from their own 26, Merrimack drove the ball into UMaine’s red zone. Despite Merrimack being first and goal from the nine yard line, the black bear defense stopped them on four consecutive plays to give possession back to UMaine. “We executed when it mattered,” Coach Charlton said in the postgame press conference.

Two first downs sealed the victory for UMaine, with the final score 31-26. “At the end of the day you can’t make those types of mistakes and win on the road against a good program,” said Dan Curran, Merrimack’s head coach. UMaine definitely benefited from the mistakes Merrimack made on routine plays.

A win is a win, but UMaine knows that there is room for improvement going forward. UMaine’s record is now 1-2 and their next game will be on the road next Saturday at Northern Illinois University. Their next home game will be on Oct. 9 against Elon University.