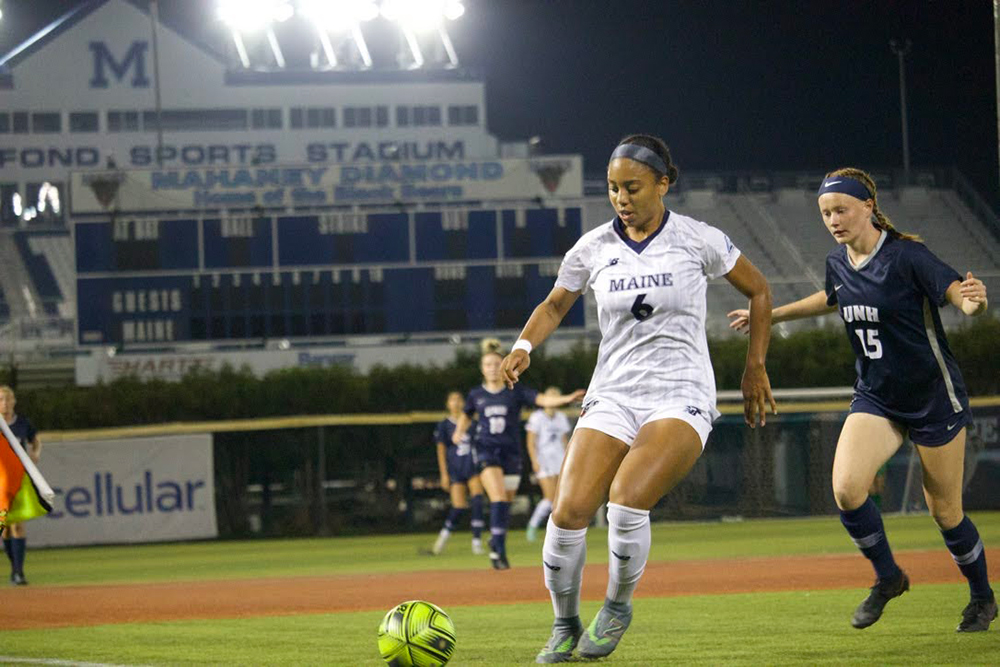 Fresh off of their dominant 4-1 victory at Stony Brook University this past week, the University of Maine women’s soccer team readily welcomed the University of New Hampshire to Mahaney Diamond in this season’s edition of the “Border Battle.”

UNH attacked directly from the kick-off, sending a long ball in the direction of the UMaine goal before rolling out for a goal kick. The Wildcats put the pressure on early, when a dangerous New Hampshire cross forced fourth-year Black Bear keeper Kira Kutzinski into a tricky save, clearing the danger thanks to some great positioning.

Only a few minutes later, UMaine looked to counter and strike quickly. A perfectly placed ball from second-year forward Tegan Morrison nearly found its way to the foot of a teammate, before UNH was able to clear the danger. Morrison’s attacking skills were on display as she baited a Wildcat defender into tackling her at the edge of the 18-yard-box, setting up a free-kick in a menacing position.

Third-year defender Halle Rogers took the set piece, having a nearly-perfectly placed ball slide through the area and out for a goal kick. Similar to previous matches, Kutzinski came in to save the day more times than not, and none more important at this point than her save in the seventh-minute. Fourth-year UNH forward and captain Francesca Picicci streaked into the box untouched, but was denied after Kutzinski cut down the angle and stifled what was a dangerous attack.

Yet again, Kutzinski came to the Black Bears’ rescue in the sixteenth-minute, parrying away a curled effort from a Wildcat forward. About four minutes later, disaster was narrowly avoided for the home team. A long ball into the area was misjudged by Kutzinski, who came out too far, but before the ball could cross the line it was cleared by fourth-year forward Emma Donovan.

UNH continued to press high and hard, forcing the UMaine defense into numerous rushed interventions. Kutzinski was able to again deny UNH with a composed knee save off of fifth-year forward Casey Peterson’s close range strike. The defense held for as long as it could, until a picture-perfect cross from New Hampshire’s first-year outside back Molly McHugh found the darting head of fellow first-year forward Meghan Guarente, angling the shot into the top right of the net.

The Black Bears looked to take back control right away, dominating the possession game in the moments following the goal. Fourth-year forward and captain Saylor Clark would try from distance, but had her strike rolled just wide of the goalmouth. Another fourth-year captain, Tiana Bucknor, would put in a free kick from distance on target, but the effort was caught by UNH’s fourth-year keeper Cat Sheppard.

Following the halftime break, the Black Bears knew they had to grab the momentum early. A scramble in the box caused trouble for the home side early on, but Kutzinski was able to smother the attack without a fuss. Donovan would be called to action on the goal-line again, denying yet another goal with a phenomenal clearance off the line.

Arguably UMaine’s best chance to tie the game came in the seventy-third minute, when Rogers had her chance deflected, forcing Sheppard into a quick reaction save to preserve the Wildcats’ 1-0 lead. UNH then wreaked havoc on the goal line, as a corner kick forced Kutzinski into a quick save, before the ball was yet again cleared off the line by first-year defender Myla Schneider, keeping UMaine’s hope alive. A chance from near point-blank for the Black Bears was miraculously kept out by Sheppard with just over five minutes to go, marking the final chance UMaine would get this contest, as they fell 1-0 to their rivals.

“I thought the second half was much better than the first,” said head coach Scott Atherley after the match. “I think their speed troubled us in the first half, we made an adjustment to go to a back four, which I think settled our team. They capitalized on their chance, we had a couple of good set pieces that we couldn’t, and that’s the difference in the game.”

The Black Bears next contest will see them take on Binghamton University in New York on Sunday Oct. 17.