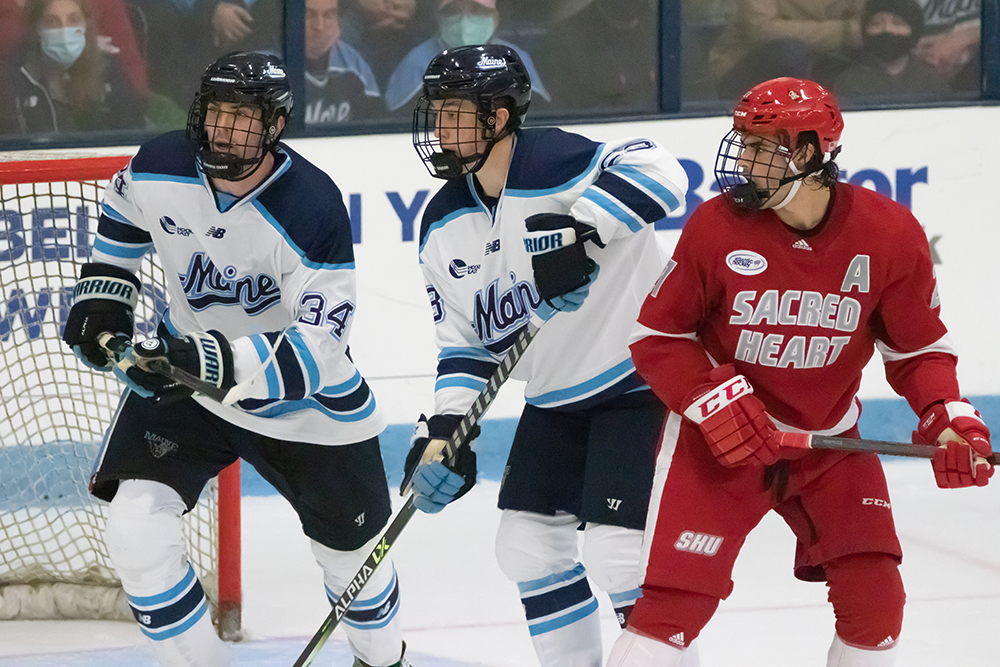 On Friday night, the University of Maine’s men’s ice hockey team took the ice with a packed Alfond Arena for the first time since March 6, 2020. 19 months later and a lot has changed. Many familiar faces in the lineup have since graduated or moved on to pro hockey, such as Mitchell Fossier, Eduards Tralmaks, J.D. Greenway and most notably Jeremy Swayman.

Another big change is at the head coaching position. Red Gendron had been UMaine’s men’s ice hockey coach since 2013, but sadly the hockey world lost a great leader when Gendron unexpectedly passed away last spring. He was honored before the puck drop with the UMaine band playing the Stein Song. It was said that one of Gendron’s favorite things was the team singing the Stein Song in the locker room after a win, making it a fitting tribute to the Maine hockey legend.

Ben Barr filled the vacancy. Barr has had a very successful career as an assistant head coach at UMass Amherst, coached in multiple Frozen Fours and most notably won the National Championship last season with UMass Amherst. Now, Barr is looking to bring a winning culture like the one in Amherst to Orono.

The game on Friday started off fast and physical. The Black Bears were feeding off the crowd and trying to execute big hits early to give them something to cheer for. The Black Bears were back! The atmosphere was electric, and getting the first goal of the game was crucial for them to ride the wave of emotion at the Alfond.

Sadly, it was not meant to be. A routine dump into the zone by Sacred Heart sent UMaine third-year goalie Matthew Thiessen behind the net in an attempt to play the puck, but the puck wrapped around the boards and then suddenly took an unexpected bounce. The puck went off the boards and shot out in front of the net. Sacred Heart fourth-year forward Adam Tisdale was the first to the puck, putting it in the empty net and giving Sacred Heart the early 1-0 lead. A real stroke of bad luck for UMaine, and a gift of a goal for Sacred Heart.

After this critical moment just eight minutes into the game, it felt as though the energy had been sucked out of the building. UMaine’s offense seemed to slow down and Sacred Heart settled into the game and started to control play.

The second period was uninspiring from the Black Bears, and in the third Sacred Heart dropped back and sat on their lead. UMaine was unable to muster a goal and were outshot by Sacred Heart 34-24. Sacred Heart won the game 1-0, the difference being the abnormal goal in the first period.

Not many of the Black Bears had a good night, but third-year goalie Matthew Thiessen was great. He stopped 33 of 34 shots, and the one he let in was hardly his fault. It will be interesting to follow the UMaine goaltending situation, which is anything but clear, but Thiessen’s performance on Friday night was promising.

On Saturday night, the Black Bears were far more successful offensively, but still fell short of picking up their first win. The lines were changed a lot from the night before, as every line combination on the offense side was switched in hopes of finding more goals, and it worked.

Returns on these changes were not immediate though, and Sacred Heart for the second night in a row struck first. Maine gave up a 2-on-1 opportunity to Sacred Heart and fourth-year forward Austin Magera fired the puck past Thiessen to give Sacred Heart a 1-0 lead around the midpoint of the first period.

UMaine responded better than the previous night when going down a goal and they were the team that controlled play through the first period. In the second period, we finally saw a Black Bear goal at the Alfond. The scorer is a new face to the lineup, third-year forward and Quinnipiac transfer Matthew Fawcett, who had not yet suited up for UMaine this season.

Fourth-year defenseman Jakub Sirota made a great effort to keep the puck in the Sacred Heart zone. He followed it up by dropping a well placed pass onto the stick of Fawcett in the slot, where Fawcett sniped the puck into the Sacred Heart net for the first goal. A great moment for Fawcett in his first game in a UMaine sweater.

“I just wanted to come in, give the team some energy, some life, get in on the forecheck and just do what I can to help win,” Fawcett said after the game.

The tie was short lived and Sacred Heart regained the lead just seven minutes later. Thiessen made an initial save on a shot from point blank, but fifth-year forward Dakota Raabe was by himself at the back post and Raabe scored off the rebound to give the Pioneers a 2-1 lead.

It seemed like the night was going to end badly for the Black Bears when Sacred Heart extended their lead to 3-1. A turnover inside their own zone by UMaine led to Sacred Heart fourth-year forward Nick Boyagian skating into the slot and firing one past Thiessen. With just over 11 minutes left in the game, it seemed as though Maine was heading toward another loss.

Third-year defenseman Adrien Bisson, less than two minutes later, cut the lead back down to one and gave UMaine a fighting chance with the play of the night. Bisson started a rush from behind his own net, gained entry into the Sacred Heart zone down the left wing and ripped a wrist shot past Sacred Heart third-year goalie Justin Robbins. This goal restored hope that was quickly fading from the Alfond crowd.

Momentum was on UMaine’s side. With time dwindling down and the score 3-2 in favor of Sacred Heart, another new transfer introduced themselves to the Black Bear faithful. Fourth-year forward Adam Dawe made a nice move to get past a defender, which set himself up for a shot on net. Robbins saved the shot, but fifth-year transfer Kennan Suthers was backdoor to put in the rebound and ignite the Alfond Arena.

“Yeah, it felt great, it’s been awhile since I was able to score, and kind of forgot what the feeling felt like, so it was nice to get it back,” Suthers said after the game. “It was a big goal, I just wish we could’ve closed it out.”

After Suthers’ goal, the game was tied 3-3 with less than four minutes to go in the third period. UMaine pressed and pushed plays, looking for another goal, but the final four minutes of the third and the five minute overtime period were not enough to determine a winner. The game ended in a 3-3 draw.

Coach Barr was happier with his team’s effort on Saturday, but he knows they have more to give. “I told the guys you gave yourselves a tie tonight playing probably as hard as we’ve played all year, the only way that we’re going to get better is to play even harder,” Barr said.  “This is a special place, special fans, the students are unbelievable. I think they respect hard work too, so I think they probably respected the effort the guys gave tonight. That’s what we’re really keying in on this year.”

UMaine will open up Hockey East play next weekend on the road at Northeastern, then they will come back home to face UConn in Orono at the Alfond Arena on Nov. 5 and 6.