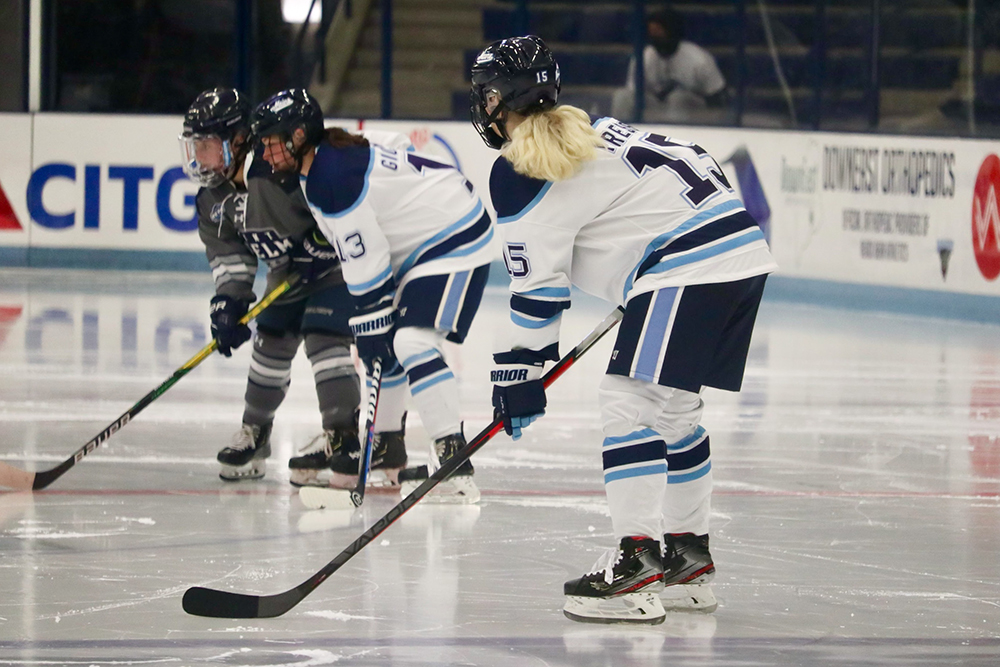 Last year the University of Maine women’s hockey team did not play a single home game due to the pandemic. On Oct. 2, 2021, the Black Bears played a game at the Alfond Arena for the first time in 595 days.

“That was unbelievable. The crowd was awesome. I thought the energy was awesome. Obviously we gave them an entertaining game in the wrong way,” said UMaine’s head coach Richard Reichenbach after the game.

Sadly the result on opening night went the “wrong way” as Reichenbach put it. Saint Anselm picked up the 3-2 victory despite being outshot 54-19 by UMaine.

The game started out about as badly as it could have for the Black Bears: 22 seconds into the game Saint Anselm scored. Fourth-year Saint Anselm forward Erin Meyers deflected a shot past UMaine fifth-year goalie Loryn Porter to immediately put UMaine down 1-0 on the scoreboard.

Despite this early goal against, UMaine responded well and outplayed Saint Anselm for a majority of the first period. However, late in the first period, Saint Anselm scored again. Fourth-year forward Kelly Golini picked up a rebound in front of UMaine’s net and put it past a sprawling Porter.

“I thought our powerplay was just, we were slow to move things,” Reichenbach stressed post game. “I mean I think the biggest thing for us was just doing things at a little bit quicker pace.”

No goals were scored in the second period, but UMaine looked the far more dangerous team and it felt as if goals were inevitable for the Black Bears.

Fourth-year forward Ally Johnson scored UMaine’s first goal of the game early in the third period. First-year forward Mira Seregély shot a puck toward the net, then Johnson deflected the shot into the back of the net and cut Saint Anselm’s lead to 2-1 with over 16 minutes left in the game. Fourth-year defenseman Ida Press and Seregély picked up assists on the play.

Shortly after cutting Saint Anselm’s lead to one, UMaine fifth-year forward Jen Costa took a body checking penalty, one of three UMaine had in the third period. It took four seconds on the power play for Saint Anselm to capitalize.

Saint Anselm won the face-off after the penalty in the UMaine zone, immediately putting the puck on Porter. Porter saved the initial shot, but gave up a rebound that Saint Anselm third-year forward Devin Porazinski picked up and put past Porter to give Saint Anselm a 3-1 lead.

UMaine’s leading scorer last year was third-year forward Ida Kuoppala, and when UMaine needed a goal their star forward stepped up. With just over 10 minutes left in the third period, Kuoppala found the puck in the slot and went top shelf to beat third-year Saint Anselm goalie Allie Kelley. This was Kuoppala’s first goal of the young season.

UMaine looked dangerous in the final 10 minutes, but a few penalties against UMaine and Kelley making some crucial saves stopped them from being able to tie the game. Saint Anselm’s defense let up a lot of shots for Kelley to stop, but Kelley was up to it. Kelley stopped 52 shots in the contest and made some big saves throughout the game. Kelley received the first star of the game for her performance.

It was not a good result for UMaine, but it meant a lot to the team to have a game at the Alfond Arena for the first time in a while. “It was nice on so many different levels to not have to travel, and play at home, and have friends, family and fans in the stands,” said Reichenbach. “It was something the players have been talking about for a while.”

After this loss the team’s record stands at 0-3. The team will travel to Long Island University for a two game series where they will be looking to pick up their first win of the season.