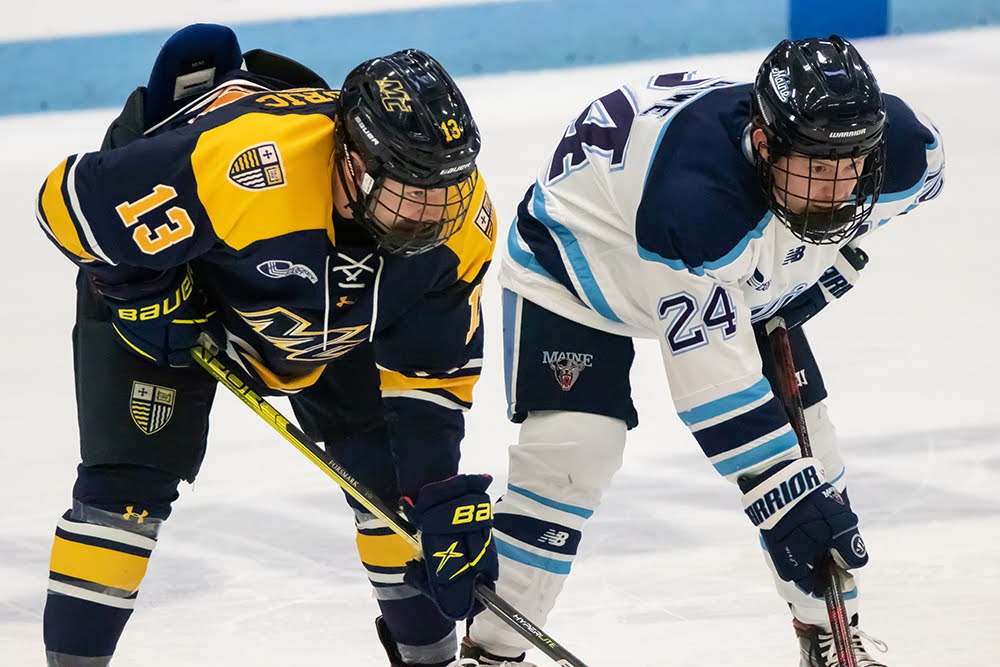 On Friday night, the University of Maine men’s hockey team finally picked up their first win of the season. The Black Bears won a thrilling game in overtime against Merrimack College 6-5. UMaine went on to lose the second game of the weekend 2-0, resulting in a series split with Merrimack.

Despite picking up the win on Friday night, the game could not have started worse for UMaine. Not even three minutes into the game, the Black Bears found themselves down 2-0. It seemed as though UMaine was going to lose again.

Despite scoring a goal, this was one of UMaine’s worst periods of their season. UMaine was out shot 15-1, and a late goal by fifth-year forward Max Newton put Merrimack up 3-1 after the first period.

There was still hope for UMaine, as a late first period penalty by Merrimack saw UMaine start the second period on a power play. UMaine seized the opportunity when fourth-year forward Grant Hebert found the puck and put it in the net after a well worked play to get the puck to the net. UMaine was now only down 3-2 and very much still alive.

Merrimack followed this up by taking two more penalties within the first 10 minutes of the second period. UMaine did not strike on the first power play but they found the back of the net on the second one. Second-year center Lynden Breen beat Ollas with a wrist shot from the top of the circle blocker side to tie the game 3-3.

One minute after Breen’s goal, UMaine shockingly took the lead. A failed clearance by Merrimack led to UMaine getting a puck on net, and fourth-year forward Jacob Schmidt-Svejstrup punched home the rebound from right in front of Ollas.

After looking like they were going to get blown out after the first period, UMaine was now leading 4-3 going into the third period. Shots in the second period favored Maine 15-3, a complete script flip from the first period.

Like the second period, the third started with one team on the man advantage and scoring, but this time it was Merrimack. Newton scored his second goal of the game just 31 seconds into the period on a rebound back post that he put past second-year UMaine goalie Victor Ostman, tying the game at 4-4.

As time was winding down in the game, it looked like the game was going to go into overtime, but Merrimack third-year forward Filip Forsmark broke the deadlock with under four minutes left when his wrist shot off of an offensive zone faceoff beat Ostman.

Down by one with under two minutes left, hope was fading from the Alfond Arena. UMaine pulled their goalie to get an extra skater on the ice in hopes of tying the game once more. The strategy paid off when Sirota scored his second goal of the game, beating Ollas with a wrist shot for the second time of the night. The roof came off the building and momentum felt like it was on UMaine’s side heading into overtime.

In overtime a first-year player stepped up when UMaine needed it most. Late in overtime a board battle was won by Breen which set up first-year defenseman David Brezeale with a breakaway. Breazeale coolly went from forehand to backhand and put it top shelf past Ollas to give UMaine their first win of the season 6-5.

“It’s pretty incredible, just really thankful for the opportunity that I’ve gotten here,” Breazeale said, reflecting on the overtime goal after the game.

The game was also coach Ben Barr’s first win as a Division 1 head coach. “It’s better than losing,” Barr said about the win.

Despite the high of a comeback victory on Friday night, the following night the Black Bears fell back down to earth and played one of their worst games of the year.

On Saturday night, Merrimack took the lead midway through the first period on a goal on a four-on-three power play. Merrimack third-year forward Ben Brar capitalized after a sloppy defensive zone turnover by UMaine immediately led to Brar putting the puck past third-year goalie Matthew Thiessen.

Merrimack doubled their lead to 2-0 in the second period when a UMaine defensive breakdown left second-year defenseman Christian Felton by himself in a dangerous area in front of the net. Felton was eventually found by a teammate and one timed the puck top shelf.

Merrimack held onto this lead against an uninspiring UMaine offense and won 2-0. UMaine only mustered up a measly 18 shots on net to Merrimack’s 28.

Coach Barr was not happy after the game with his team’s performance. “We didn’t really generate much, didn’t deserve to win, didn’t deserve to score, disheartening a bit,” Barr said after the game. “There’s nothing about that game that was good enough, there’s nothing about how we played really the entire weekend that was good enough, if I’m being honest.”

Next weekend, UMaine will travel to Conte Forum to take on Boston College in a two-game series. UMaine will need to play a lot better if they hope to come back from Boston with positive results. Boston College is 6-5-1 on the year and are currently ranked tied for second in the Hockey East standings, meanwhile UMaine still sits at the bottom of the table.

“If we play like that we won’t [win],” Barr said when asked about facing Boston College. “If we play a little bit harder maybe we’ll have a chance, that’s just gonna be our team this year.”

Closing the gap: The disparities between men and women’s college athletics
5 New England attractions to visit on your winter break