Climate scapegoats: Shifting the blame from consumers to industry

Home /Opinion/Editorials/Climate scapegoats: Shifting the blame from consumers to industry 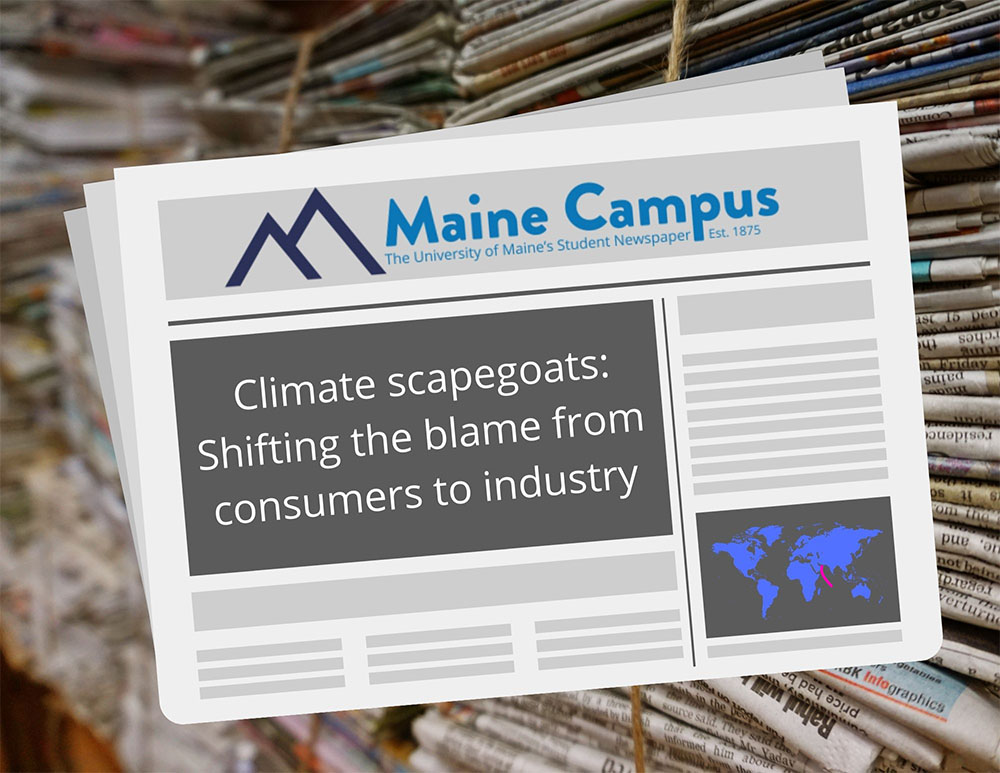 In recent years, local governments have enacted laws regulating consumer products in an effort to reduce our dependence on petroleum products. The movement began by targeting small items that could have easy replacements, such as plastic straws and grocery bags. The plastic straw ban coincided with the rise of reusable metal and bamboo straws, which help reduce daily plastic waste. In Maine, the plastic bag ban in July 2021 implemented the use of reusable bags constructed from brown paper, cloth and insulating material.

Despite the controversy of these laws, the largest benefit of them is the push for awareness about how plastic pollution affects local ecological systems. By far, the most vulnerable ecosystem to plastic contamination are marine environments, with coastal ecosystems less than 50 kilometers from shore the most at risk. A study conducted by the American Chemical Society cites that nearly 700 marine species are directly impacted in some way by plastic contamination in their environment, either by eating plastic bits after confusing them for food, or becoming entangled in loose-flowing plastics that can cause serious injury.

A recently passed California law took an even bolder step by banning small gasoline engines, which power small equipment like lawn mowers and ATVs. Again, this regulation places the burden of blame on the backs of average consumers when in reality the foundation of this law should target gas companies.

For one, the average consumer will generate significantly less emissions over the course of a year from occasionally mowing their lawn or riding around on an ATV than they will by driving a gasoline-powered car. Even in terms of emission generation, cars are vastly overshadowed by the pollution that is created by a small handful of industries and companies.

These kinds of regulations, despite their eco-forward attitude on paper, only serve to pin most of the blame on the average consumer and their daily activities for contributing to environmental harm. In reality, the greatest threat looms from large industries, but this truth is often kept hidden away in the shadows of public discourse.

In the end, these measures are only targeting the surface of the problem, attempting to mitigate the symptoms of climate change without treating the root of the issue. One aspect of meaningful, impactful change will come from within industries, from upcoming generations of innovators who will be able to redefine various industrial processes to reduce excessive or harmful byproducts. For consumers, education will be the most effective tool for environmental protection, as it’s important to learn about where emissions are generated, how plastics degrade and other potential ecological harms. Far more change will come from these routes rather than imposing regulations not entirely based in reality.