Looks can be deceiving: Unmasking alcohol abuse in college

Home /Opinion/Editorials/Looks can be deceiving: Unmasking alcohol abuse in college 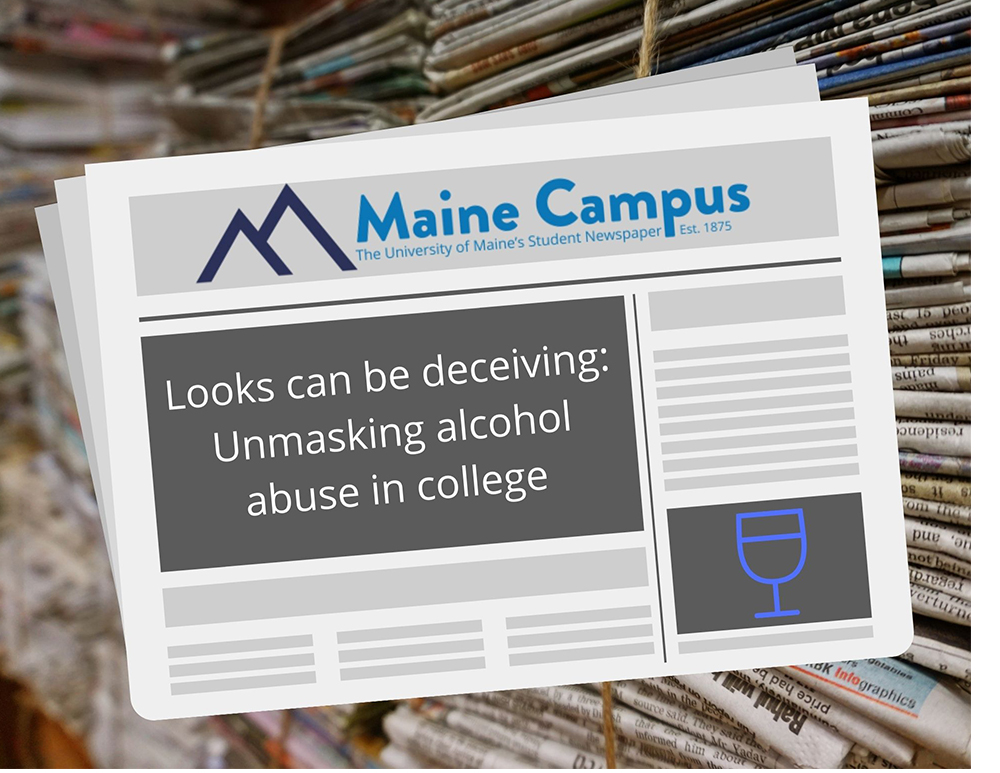 There’s a popular saying among college students: You can’t be an alcoholic until you graduate. The truth is—you can, and many college students are. Unfortunately, this issue is often dismissed with the attitude that college is the best four years of your life. Substance abuse is glorified on social media, normalized in everyday settings and present at nearly all off-campus social events. Just because it’s everywhere doesn’t mean it’s not problematic.

“Responses from more than 10,000 full-time students at 119 four-year colleges indicated that 44% of survey participants were binge drinkers,” a Wall Street Journal staff reporter stated in reference to a Harvard study on college alcohol consumption. Nearly half of students drinking excessively is extremely alarming, especially considering the serious implications for both the physical and mental health of students, as well as their academic performance.

Binge drinking, as defined by the National Institute of Alcohol Abuse and Alcoholism is “a pattern of drinking alcohol that brings blood alcohol concentration (BAC) to a 0.08%—or 0.08 grams of alcohol per deciliter—or higher.” This is consuming approximately 4 to 5 drinks, depending on the person’s sex and body mass, every two hours.

Alcohol abuse and binge drinking can lead to health and safety risks, including drunk-driving, injuries, liver damage and increased risk of sexual assault. Academic performance and mental health are also seriously impacted by substance abuse. “About one in four college students report experiencing academic difficulties from drinking, such as missing class or getting behind on school work,” the NIAAA reported. As well, excessive drinking is associated with higher Beck Depression Inventory scores, and many students are already at risk of depression due to the immense stress and workload of college.

The risk alcohol abuse poses to college students seems so apparent, and yet it hides in plain sight on social media. The coverage generally starts on “Thirsty Thursday,” the first night of binge drinking. This is followed by the “Friday Beers” memes that get peers excited for the celebratory end-of-week drinking. The weekend is then filled with one Snapchat and Instagram story after another of alcohol-filled social events. From candid boomerangs of IPAs to drunk selfies at college parties, the covert alcohol imagery contributes to the normalization of college substance abuse. These images are so common that it is somewhat difficult to differentiate between healthy consumption and borderline alcoholism.

In 2016, this problem was highlighted by a social experiment in which an ad company created a fake Parisian instagram user, “Louise Delage.” All of her posts portrayed a beautiful 25-year-old living a fun and social life. However, each one of her 150 photos contained alcohol. She amassed over 50,000 followers, but none of them commented on her page’s excessive alcohol related imagery.

“The ad agency BETC created Louise for its client, Addict Aide, to put a spotlight on how easily you can look past a friend or loved one’s alcoholism. After all, Louise looks like she’s having a great time, but when you zoom out, you notice there’s alcohol in every single picture,” Cosmopolitan reported. This social experiment exposes the unfortunate reality that most substance abuse in college goes unseen and that a reality check is needed for students in order to address this issue.

While some concerning behaviors remain hidden amongst instagram posts, others are broadcasted quite openly. In fact, there is an entire app dedicated to posting alcohol consumption. Beer Buddy, as suggested by its slogan “Drink with me!” is a social media platform that allows users to post photo updates of their drinking. It shows the user’s location and ultimately serves to encourage peers to drink with one another. Students can share emojis to represent how much they’re drinking, contributing to the lighthearted, almost comedic tone which essentially glorifies alcoholism.

Excessive alcohol consumption has become a normalized aspect of the college experience. The transformative years spent in college give students the opportunity to interact with their peers, but the constant presence of alcohol in social settings can lead to dangerous addictions that can negatively impact student’s health and academic performance. Students need to challenge this unhealthy culture and acknowledge how social media contributes to the glorification of substance abuse in college.