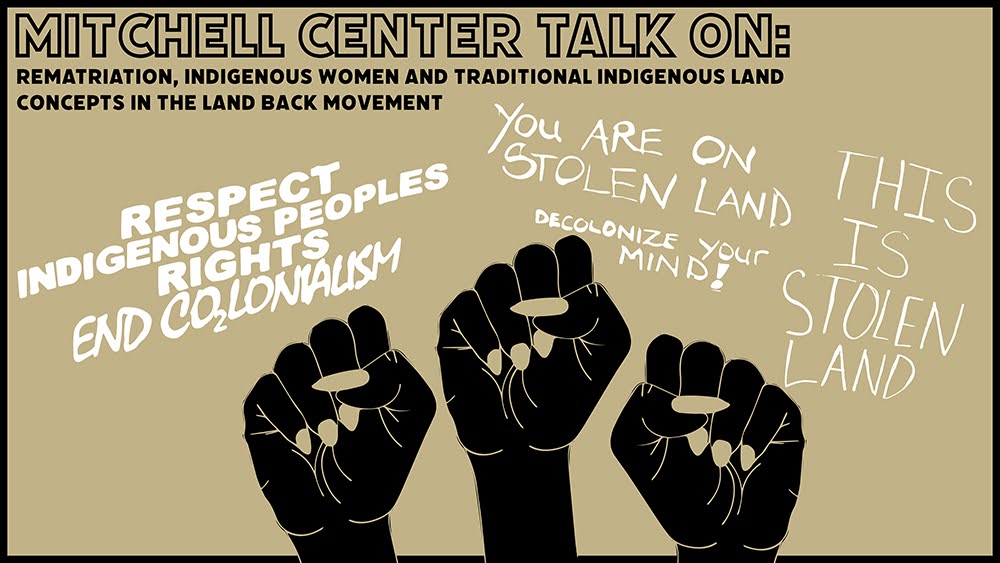 “I don’t always do a land acknowledgement when we do these talks, but I will tell you that when I come to campus every day and I cross the Stillwater branch of the Penobscot River on to this island, I remember that these are the ancestral lands and waters of the Penobscot people,” Hart began. “I thought today I would read the official acknowledgement, even though it’s in my mind a lot of the time.”

Hart then went ahead to acknowledge that the event was taking place on the homeland of the Penobscot Nation, before passing the discussion to the event’s facilitator Darren Ranco. Ranco is a joint faculty member for the Mitchell Center and UMaine’s department of anthropology and the chair of Native American programs.

“I’m really excited about the panel today. Two really incredible speakers who do so many things for Wabanaki people, and across our region,” Ranco said, before going on to speak to the subject of the panel. “This is very much a follow up, and a deepening of a Mitchell Center discussion that we had on March 29, called the Land Back Movement and the future of land relations in the dawnland… Today we’re going to take those issues into a more Indigenous focus and discuss the roles that rematriation, Indigenous women and traditional Indigenous land concepts have in the Land Back Movement.”

Ranco explained that the panelists involved in the session are on the forefront of the issues at hand. He also described that the idea of Indigenous land concepts is centered around a relationship between people and the earth they inhabit, and rematriation is a rekindling or reimagining of those sorts of relationships. Ranco then introduced the members of the panel.

Mali Obomsawin, a citizen of the Abenaki Nation at Odenak, is a writer and organizer with the Racial Equity and Injustice organization and Sunlight Media Collective. She is also the director of the Bomazeen Land Trust.

Sherri Mitchell is a Penobscot Nation citizen and is a lawyer and activist. Mitchell studied law at the University of Arizona and has a bachelor’s from the University of Maine. Mitchell spoke on issues of environmental and spiritual change, and is the founding director of the Land Peace Foundation.

The discussion then turned to Obomsawin, who presented on the topic of rematriation, and the goals of her organization, the Bomazeen Land Trust.

“Our mission is to allow the Wabanaki people to renew and resume our traditional caretaking and stewardship in Wabanaki homelands,” Obomsawin explained.

Obomsawin then described and defined the concept of rematriation, which was a central theme of the discussion panel.

“When we think of repatriation we think of the return of stolen artifacts or remains or cultural possessions of Indigenous peoples. Rematriation to me is a continuation of that concept, but it is more broadly expanded to that return and revolution toward our original kinship system… its inclusive of land returns, and of food sovereignty and an ability to practice our traditional and spiritual life ways,” Obomsawin said.

The goal of the Bomazeen Land Trust is in rekindling these kinships and relationships to the land in a way which effects greater change in the name of climate justice as well as for Indigenous people’s rights. Obomsawin explained that the issue of climate change stems from centuries of extraction-based systems that accumulate wealth and waste, and have led to the expulsion of Indigenous peoples.

“With rematriation it’s really a grassroots and women led movement of earth defense… and a return toward the kinship systems that are life giving,” Obomsawin said.

Obomsawin went on to describe some of the work which the Bomazeen organization has been doing with food resource education, before concluding her presentation with goals for the organization’s future.

“This coalition building work, that’s the gig to getting to a future where things are more in [the] right relation, things are more balanced,” Obomsawin concluded. “We don’t have a lot of time, but we have everything we need to build that world.”

The discussion was then passed to Mitchell, who spoke on her work with the Wicuhkemtultine Kinship Community. She began with her own definition of the concept of rematriation.

“People have, as Mali had said, very different notions about what rematriation is,” Mitchell said.“When we think about rematriation, certainly it’s tied to the land back movement, but really it’s about matricultural, matrilineal, matriarchal ways of being in relationships… at the heart of that is the ability to sustain healthy and loving relationships. And the essence of that ability… is at the heart of rematriation.”

Mitchell discussed the idea that all creation is related to each other, that all of life is interconnected. Mitchell later described the notion of a mother land and a mother tongue which connects one to the land of their birth through blood.

The concepts of rematriation and kinship to the land are at the center of Mitchell and Obomsawin work with the Land Back Movement. For more information about the Mitchell Center for Sustainability talk series visit, https://umaine.edu/mitchellcenter/seminars/fall-2021-sustainability-talks/.