Penalties and turnovers doom the Black Bears on senior day 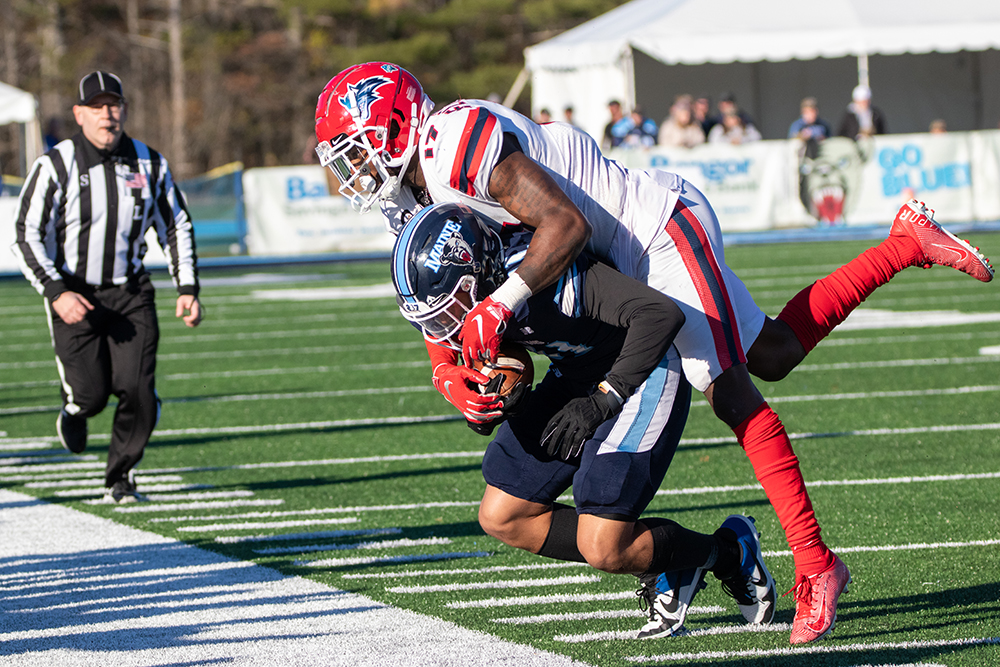 On Saturday, Nov. 6, 2021, the Stony Brook Seawolves and the University of Maine Black Bears faced off.

Coming into this game, the Black Bears were without one of their best wide receivers, fifth-year Andre Miller, who was out with a hamstring injury.

Third-year Joe Fagnano, the team’s starting quarterback, returned this week after suffering a high ankle sprain in week two against James Madison. He did not play at all on Saturday and it is unknown if he will play again this year.

On the Seawolves’ first drive, third-year kicker Angelo Guglielmello was able to make a 38-yard field goal after the team successfully moved the ball down the field, all thanks to their sixth-year quarterback Tyquell Fields making plays with both his arm and legs.

After holding the Black Bears to a punt, the Seawolves got fantastic field position at the 45-yard line and Guglielmello once again kicked a field goal, this time from 37-yards out. The play was possible after Fields made a completion to fifth-year wide receiver Khalil Newton that set up the field goal. The kick gave the Seawolves a 6-0 lead.

On the Black Bears’ next drive, second-year quarterback Derek Robertson threw a backwards pass that ended up being ruled a turnover recovered by Seawolves fourth-year linebacker Isaiah Givens after the play was reviewed. This set up a 9-yard rushing touchdown from fourth-year running back Ty Son Lawton.

The Seawolves scored another field goal after forcing the Black Bears to punt once again, this time from 30 yards out by Gugliemello after Fields was able to connect with third-year receiver Shawn Harris Jr. on a 46-yard pass.

UMaine was finally able to score after second-year safety Shakur Smalls intercepted a pass from Fields. This set up a 69-yard rush from second-year running back Freddie Brock to get the Black Bears in the red zone for the first time in the game. Two plays later, Robertson hit Brock for an 11-yard touchdown pass.

After trading punts, UMaine was able to move the ball down the field in 10 plays after getting great field position at the 45-yard line. UMaine’s drive was halted once they got over midfield and had to settle for a 37-yard field goal from fifth-year Jonny Messina.

At that point, the Black Bears seemed to have the momentum to win the game, as they were now only down 16-10 after forcing another punt. It looked like the Black Bears were about to score again when fifth-year seawolves defensive back Randy Pringle intercepted a Robertson pass at the seawolves 21-yard line.

On the Black Bears’ next drive, they were quickly faced with a fourth-and-one on their own 32-yard line. After calling a timeout, Head Coach Nick Charlton chose to go for it, which would turn out costly as Robertson failed to convert.

“I looked at the distance of the actual down, and it was less than a foot,” Charlton said after the game. “You know, now obviously, I wish I had not done that, but it was a matter of inches.”

After receiving the ball, the Seawolves quickly scored a touchdown after Lawton scored from 7 yards out. However, Guglielmello missed the extra point.

The Black Bears were able to get the ball back and move all the way down the field thanks to big catches from fifth-year receiver Devin Young and second-year receiver Montigo Moss. They set up a 10-yard touchdown pass from Robertson to fifth-year wide receiver Jacob Hennie to make it a five point game.

After forcing the Seawolves to punt, it looked like the Black Bears were about to complete the comeback. However, on the very first play of their next drive Robertson threw a pass across his body right into the hands of third-year linebacker Tyler King, ending the game with the Seawolves winning 22-17.

Robertson would finish the game completing 17-32 passes for 160 yards, two touchdown passes and two interceptions. Brock led the team in rushing with 10 carries for 82 yards but outside of the 69-yard run, the Black Bears did nothing rushing the ball. In the absence of Miller, Moss led the team in receiving with three receptions for 48 yards.

Sixth-year linebacker Ray Miller led the defense with 12 tackles and Smalls had the interception in the second half.

In the end, the thing that ruined the Black Bears chances of winning this game, outside of turnovers, were the costly penalties. The Black Bears had 12 penalties for 102 yards, which ended multiple drives and continued the drives for the Seawolves.

“We left way too many points out there. We just didn’t execute at times when we had optimal field position to be able to do that,” Charlton said after the game.

Next week, the Black Bears go on the road to face the University of Massachusetts Minutemen for their second matchup against a FBS school this season.

New release ‘Dune’ resonates with the public
Against all odds, the Braves pull off a World Series win