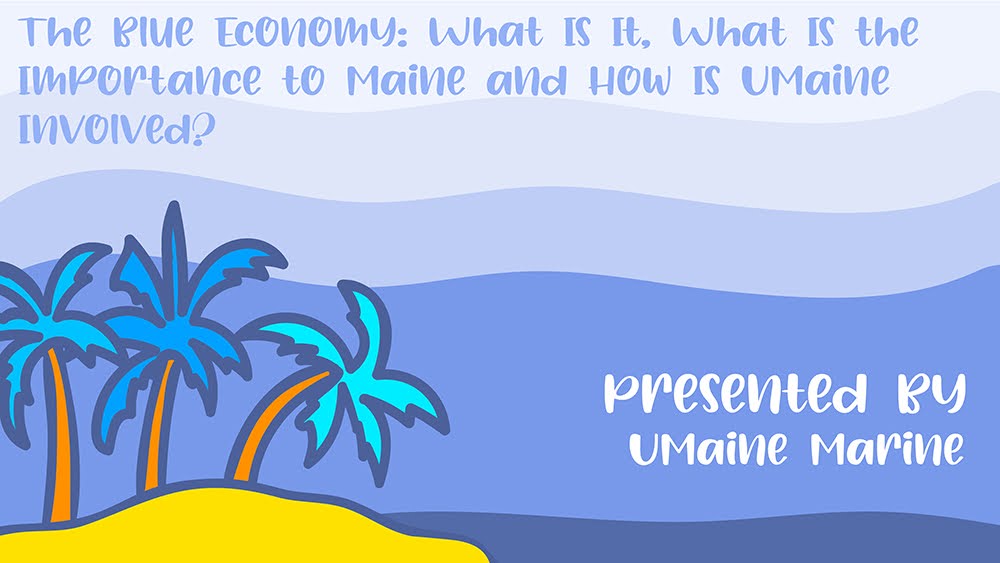 On Nov. 18, the University of Maine MARINE Initiative hosted an event to highlight the importance of the Blue Economy, in the state of Maine. The Blue Economy refers to the income the state makes from marine-based businesses, including the fishing industry and the lobstering industry. This virtual event gathered a panel of speakers, Curt Brown of Ready Seafood, Alex de Koning of Hollander and de Koning and Kate Dempsey of The Nature Conservancy in Maine, to elaborate on the Blue Economy and the role UMaine plays in the economy. UMaine President Joan Ferrini-Mundy introduced the importance of the Blue Economy at the beginning of the meeting.

“I’m delighted to open this discussion of the Blue Economy in Maine. As a state with over 3,478 miles of coastline and 6,000 lakes and ponds and almost 2,200 miles of rivers, the Blue Economy is critically important to the state and impacts so many lives. At our university we educate and engage with the public and we are compelled to address the Blue Economy topics and issues to help strengthen this exciting venture and area for our economy in the state of Maine,” Ferrini-Mundy said.

With an average of 46 bachelors degrees, 13 masters and 6 doctoral degrees per year in the last five years, the UMaine School of Marine Sciences contributes a lot of time and research into the Blue Economy.

Moderating the panel discussion was Dr. Caroline Noblet, an associate professor of economics at UMaine, whose research focuses on working with citizens and consumers to understand the choices we all make about our natural resources. Noblet continued the conversation by introducing Heather Johnson, the commissioner of the Maine Department of Economic Community Development.

“[We have] to think about the resilience and innovation that Maine fisheries have always had,” Johnson said. “We need a lot of research and a clear understanding of how to do it in a climate responsible way, and with a workforce that is engaged and passionate about the work and training to be prepared for all of the pieces of that.”

The Blue Economy plays a crucial role in the state of Maine, especially for multigenerational fishermen who have been relying on it for decades. The next panelist to present was Curt Brown, a marine biologist with Ready Seafood, who spoke on the role the industry has played in his life, both professionally and within his family.

The next panelist to speak was Alex de Koning, who joined his family business of mussel farming, Hollander and de Koning, after graduating from UMaine with a degree in engineering. He spoke on the changing environment’s impact on the community and the many different degree paths that can contribute to the Blue Economy.

“I felt one of the coolest things was seeing how broad and diverse all of the interests in the Blue Economy are everywhere you go. It seems to be that UMaine has something for everyone,” de Koning said.

The final panelist to contribute to the importance of the Blue Economy in Maine was Kate Dempsey, the state director of The Nature Conservancy.

“One of the important things we are invested in at the conservancy is working with our ground fish fisheries and electronic monitoring systems. It is great for the fishermen because what they are saying on the water gets recognized by regulators, but then the data is much more relevant to the University that is doing research,” Dempsey said.

“The business model will have to change drastically, which has pushed us to invest in a new collection system. We are seeing constant changes with everything,” de Koning said. “We have to throw it [tradition] out the window because the environment is changing, and we have to adapt as growing rates are changing.”