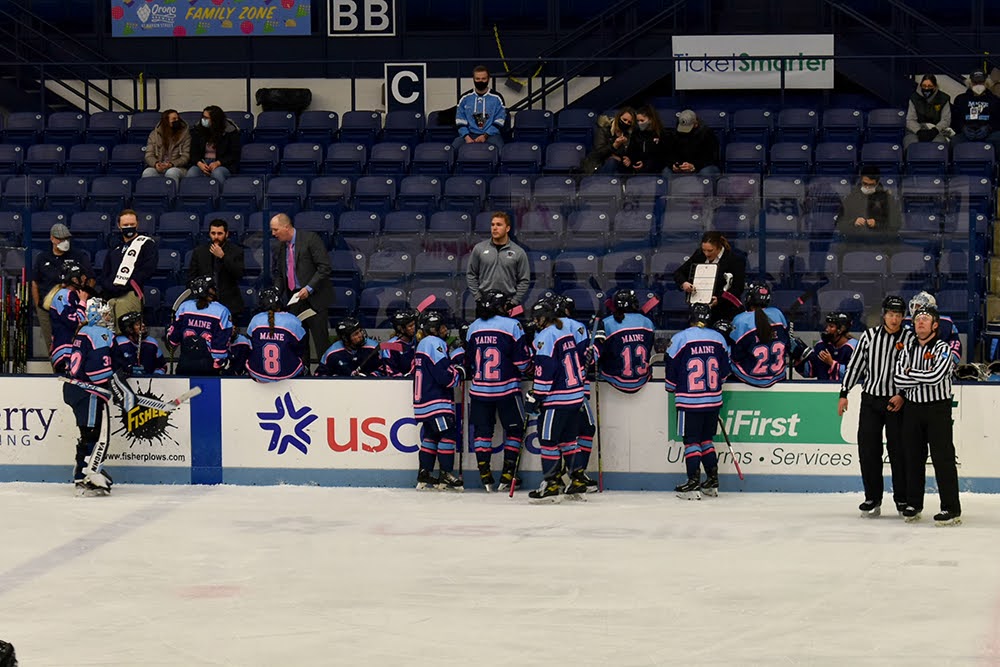 “I’m pretty proud of the way we played five to six periods this weekend. We played really well,” UMaine’s head coach Richard Reichenbach said after the game. “We just couldn’t find the back of the net, and their goalie played really well.”

The Black Bears came into this series riding their winning streak, not having lost a game since the last time these two teams met in early January.

Vermont came into this series with a 17-10-1 record and was on a seven-game winning streak.

On Friday in the first period, Vermont fourth-year forward Theresa Schafzahl struck first to open the scoring in the series after picking off the Black Bears and shooting the puck past second-year goalie Jorden Mattison. The Black Bears got off to a slow start, only having seven shots on goal during the first period compared to 12 from the Catamounts.

The second period was scoreless as both teams struggled to get shots off, thanks to tremendous defense on both sides. UMaine had just four shots on goal the entire period compared to Vermont’s nine.

Fourth-year defenseman Ellice Murphy scored the second goal for the Catamounts from the blue line thanks to an assist from second-year defenseman Bella Parento and fifth-year forward Kristina Shanahan to put Vermont up 2-0.

The Black Bears finally scored after fourth-year defender Ida Press’ shot was knocked up in the air and brought down by fourth-year forward Ali Beltz, who found third-year forward Ida Kuoppala wide open on the side for her ninth goal of the season.

Even with the late goal from Kuoppala, it was not enough as the Catamounts continued playing fantastic defense, and the Black Bears fell 2-1. The UMaine offense was finally able to get some shots off with 12 in the third period, but it was too little too late.

Both goalies were terrific as Mattison stopped 25 of 27, and Vermont’s second-year goalie Jessie McPherson stopped 22 of 23 shots in a masterful defensive performance by UVM.

Game 2 was not much different for the Black Bears as they lost once again to the Catamounts 3-1.

Vermont scored first for the second day in a row when fifth-year forward Alyssa Holmes got a goal from a breakaway thanks to an assist from Parento and third-year forward Lili Humphrey for her second goal of the year to give the Catamounts a 1-0 lead. Both offenses were held to limited chances, with both teams only shooting the puck five times.

Late in the third period, third-year forward Morgan Trimper finally got the Black Bears on the board after deflecting a shot from second-year defenseman Olivia King for her fourth goal of the season, assisted by fifth-year defenseman Taylor Leech. Trimper’s goal was all for not, though, as almost immediately fourth-year Vermont forward Corinne McCool easily made a wide-open goal with no goalie in the net thanks to assists from Holmes and Murphy to end the game.

Vermont was held to just six shots again in the third period to UMaine’s 11, but just like they had the whole game, the Catamounts capitalized on their few shots.

Mattison did not see much of the puck, with only 12 saves compared to McPherson’s 21. UMaine had plenty of opportunities to score and get back in it, but they failed to capitalize on these opportunities.

“I think we just need to finish,” Reichenbach said. “That’s how they scored both their goals and maybe our one-on-one play, but outside of that, just maybe driving far post a little bit more and making sure we’re boxing out and getting some rebound opportunities.”

With these losses, the Black Bears drop to 10-10-1 and will look to get back on track when they travel on Friday, Feb. 11 to Boston to face the Northeastern Huskies.