Forced to flee or determined to fight: Ukrainians need our urgent support

Home /Opinion/Editorials/Forced to flee or determined to fight: Ukrainians need our urgent support 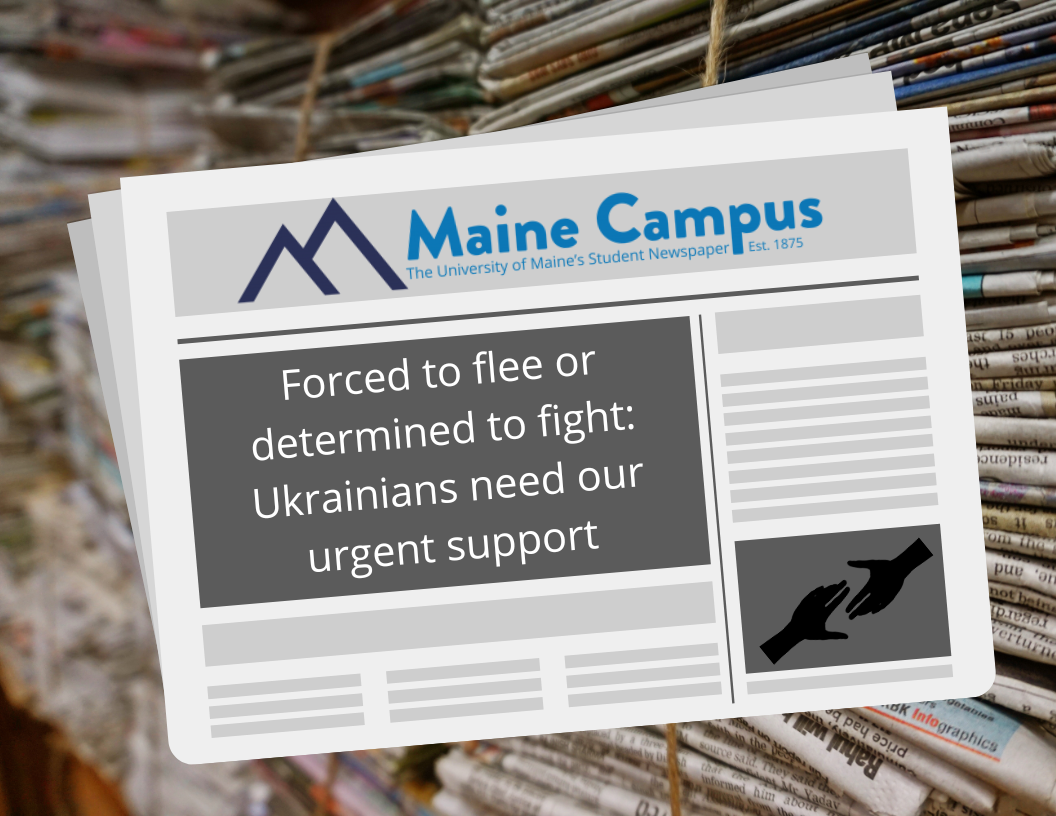 On Feb. 24, 2022, Russia commenced an unprovoked invasion into their democratic neighbor Ukraine. The destructive military attacks have displaced tens of thousands both within the country and on an international level into neighboring countries including Romania, Moldova and Poland.

“Poland expects as many as one million Ukrainians to enter its territory not counting those headed to Slovakia, Hungary, or Romania,” reported Drew Hinshaw for the Wall Street Journal.

While Russian and Ukrainian officials have agreed to meet and discuss negotiations, innocent Ukrainian civilians continue to fear for their safety as they enter the fourth day of intense armed conflict with Russia. The world has watched in disbelief as bombings, shootings, civilian casualties and buildings collapse live on TikTok and other social media sites, leaving many wondering how individuals can help Ukrainians during this unprecedented modern war.

Correspondence with 23-year-old University of Maine graduate Iaryna Iasenytska has provided some insight into the unfolding events in Ukraine. Iasenytska graduated from UMaine in 2021 with an international affairs degree with a concentration in security and minors in Spanish and legal studies.

She currently resides in Kyiv, the capital of Ukraine and the epicenter of Russian-Ukrainian conflict, and has updated us on the current state of affairs. She has shared with us detailed information on the essential support currently needed by Ukrainians.

“Reaching out to your representative officials to urge them [to] act on the current Russian invasion and terrorism in Ukraine (Russian forces are bombing, firing, targeting civilian buildings and civillians, including women and kids),” said Iasenytska. “Ask your government to support Ukraine with military aid, financial support, humanitarian resources, as well as employ stricter and more diplomatic measures, [like increased] sanctions.”

Maine’s representatives can be found on the Maine.gov site. Enter your address to find your respective elected officials, and contact them by their listed phone or email.

Financial support is another crucial element for helping provide food and resources for displaced refugees as well as military aid for those bravely choosing to fight back against the Russian forces. Donations can be made to the Return Alive Foundation which helps to fund the Ukrainian army.

Donations should also be made to UNICEF, the Ukrainian Red Cross and Doctors without Borders to provide support to those in Ukraine, especially children, bearing the consequences of the evolving humanitarian crisis.

It is also vital to support and protect independent journalists helping to keep the world informed on the rapidly evolving conflict. The Kyiv Independent is an example of high quality, independent journalism that provides insightful news stories on Ukraine’s current events in English. They can be supported financially through their Patreon.

Lastly, Iasenytska strongly encouraged following and sharing information from Ukrainian officials and remaining vigilantly aware of fake news, unreliable resources and Russian propaganda. Updates from the president of Ukraine, Volodymyr Zelenskyy, can be followed on Twitter and Instagram, as well as updates from the Ukraine Minister of Foreign Affairs.

“Ukrainian war is a war for democracy and peace for all of Europe. It was Russia that started this invasion. We are simply defending our state and the ability to choose our government,” said Iasenytska amidst the turmoil escalating in her home country.

“While being in the US and studying with many of you [at UMaine], I saw that we share similar values of democracy, which are certainly worth defending and fighting for no matter what might come and who might come to challenge them,” said Iasenytska.

Her bravery to speak up should be met with global solidarity for her and the people of Ukraine as well as immediate action and support.