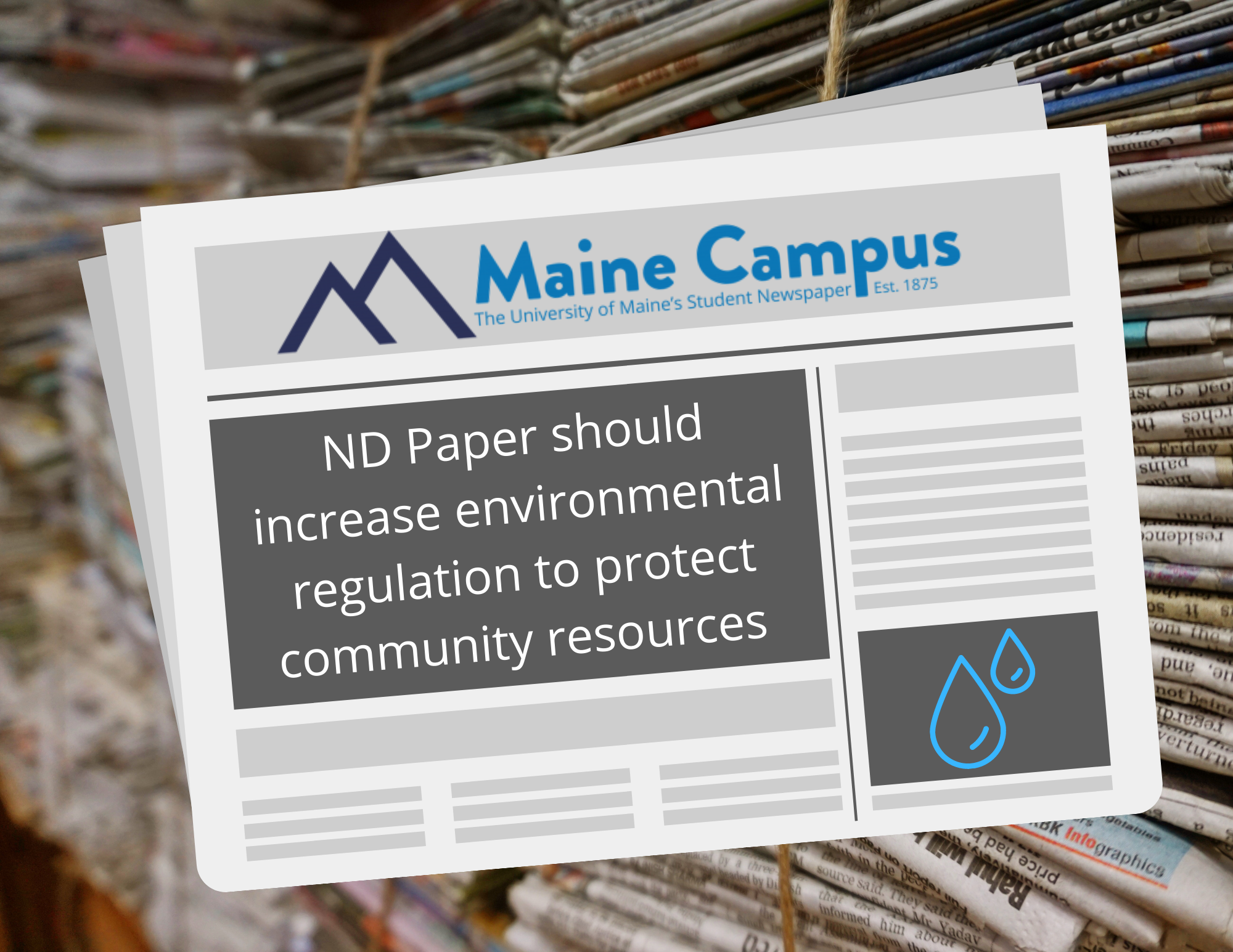 As a University of Maine student, you may be all-too familiar with the sulfur, almost rotten egg smell wafting through UMaine’s campus, perhaps even making its way into your dorm on particularly windy days. The pungent odor’s origin is the ND Paper Old Town Mill.

The mill closed in 2015, but reopened in the fall of 2018 after it was purchased by ND Paper, a subsidiary of the Chinese company, Nine Dragons Paper Ltd., according to the Bangor Daily News. The mill has been in operation for over 150 years, fluctuating between opening and closing, bouncing from owner to owner.

Despite its benefits of revenue and providing jobs for hundreds of Penobscot County locals, the pungent odor and the negative environmental effects far outweigh the positives.

ND Paper produces unbleached softwood kraft pulp at the Old Town Mill, which can be used to produce paper, cardboard or construction products, according to The University of Maine Office of Sustainability. This process involves the use of caustic soda to break down wood chips, which contains sodium sulfide, which along with the gas mercaptan, produces the familiar rotten-egg smell. The mill also produces air pollutants such as hydrogen sulfide and sulfur dioxide, which can cause changes in air quality and gather in waterways via rainfall, causing a variety of environmental issues that can be detrimental to human health, according to the University of Maine Office of Sustainability.

The smell aside, the mill and its production have negative effects on the environment and on the residents in its own community. There seems to be a large lack of regulation when it comes to what NP Paper is allowed to put out into the environment.

The argument for stricter regulation was further validated in October 2020, when a spill of more than 30,700 gallons of harmful chemicals flowed from the ND Paper Mill into the Penobscot River.

Brian Kavanah, the director of the Department of Environmental Protection’s Bureau of Water Quality spoke about the negative environmental impacts the spill had, saying that the specific material that spilled into the river was a caustic, sodium hydroxide substance that caused a significant rise in that part of the river’s pH level. After the leak happened, the pH value of the water in the spill area was up around 12 on a scale of 14, according to Maine Beacon.

“It appears it created a fish kill because there were 40 to 50 fish found soon after the leak was discovered in that area,” said Kavanah.

Old Town is the home to roughly 7,395 residents from all walks of life, who are active and proud of their community. It is also home to the beautiful Penobscot River, which houses a variety of fish, some endangered, who provide life to eagles, osprey, kingfishers, otters, seals and more. However, this flourishing ecosystem and the residents surrounding it are in danger. Without significant repercussions, discussions of more intense regulation or closure, ND Paper is polluting our air and filling our water with toxic chemicals.

Maine is one of the most naturally beautiful states in the country, with wildlife and greenery filling every square mile and a very proud population of people, but if environmental regulation isn’t prioritized, then there won’t be much left to admire.