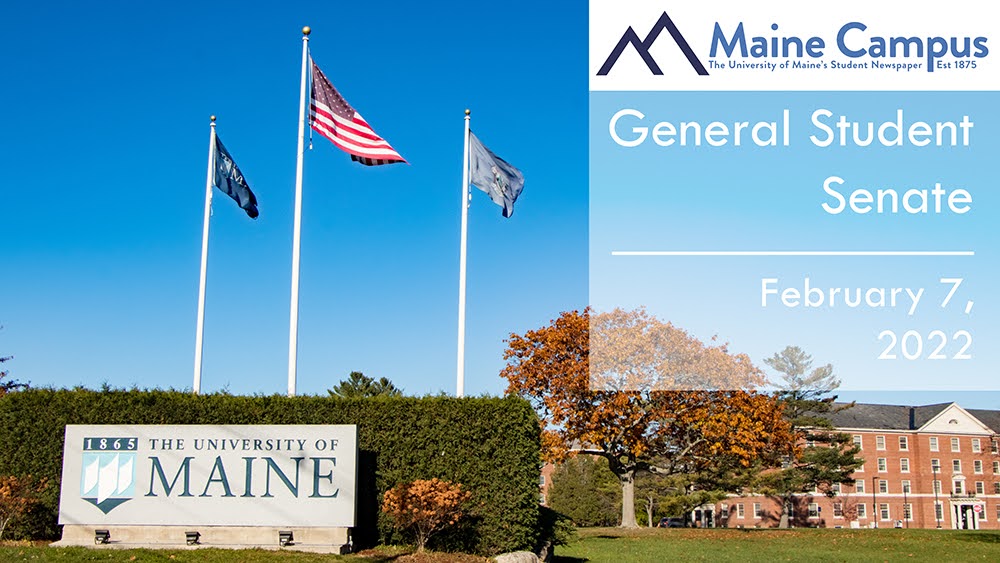 On Tuesday, Feb. 1, the University of Maine General Student Senate re-appointed many current members and discussed goals for the spring 2022 semester.

After stating their pledge to the senate, GSS began work with their current group of senators. UMSG President, Zachary Wyles, touched upon what he hopes to see done this semester during his executive report.

“Last semester was focused more on getting student government back up and functioning from a remote stand-point to fully functional in-person,” Wyles said. “This semester we’re going to be focusing on what we campaigned on, and for me that was a lot of academic initiatives.”

According to Wyles, he hopes to make some changes to academic standards that are more convenient to the student body. One of these initiatives is a two-week “add period.”

“If you can drop classes for two weeks there’s no reason you shouldn’t be able to add them for two weeks, that’s never made sense to me,” Wyles said.

Wyles also wants to introduce the idea of a dead week to UMaine. A dead week is characterized as the week before college final examinations where students are working to overcome procrastination and test anxiety. Universities want to use this week to focus on the rehabilitation of student wellness and Wyles wants to bring awareness to this and incorporate it at UMaine.

“The week before finals professors cannot assign written assignments, exams and any high effort assignments so that the student can focus on cooling down for the semester and getting ready for final exams,” Wyles said.

These are just some of the academic initiatives that Wyles hopes to implement at UMaine, and he plans to bring these ideas up to the provost council, the chief academic office of the university.

“I ran on making academic life easier for students so that’s what I’m going to be focusing on this semester,” Wyles said.

There were multiple funding requests during the meeting, some directly from the student senate.

The UMSG Membership committee requested $2300 from the student senate budget.

“The food ban across campus is probably going to be lifted pretty soon so if you would like to eat food at these meetings I recommend passing this,” Kelly said.

The food ban that Kelly refers to was recently put into place this past January by the university due to the rising number of COVID-19 cases. This impacted UMaine Athletics as concessions were immediately shut down, and the student senate meetings fell into these restrictions as well. This pause on food services was meant to be temporary and the university has yet to reveal their plans moving forward.

Groups on campus such as the Sustainability and Environmental Action Division (SEAD) are also making efforts to help make changes to on-campus dining. SEAD is asking for $1100 for their mission to give students alternatives to plastic.

“SEAD’s members and other members of the environment community have noticed dining halls use a lot of plastic now,” the senate representative to SEAD said. “Most of that is because of understaffing and because of [COVID-19] for sanitary reasons, so we thought it would be a good idea to give students reusable utensils that come in a case that they can bring to the dining hall and back to their dorms.”

According to SEAD, they attempted to reach out to the dining halls but were unsuccessful so they decided to take matters into their own hands. Their goal is to get 100 sets of reusable bamboo utensils and, depending on how successful it is, will later expand that initiative.

“I think that SEAD did a lot of really great work in strategizing how they plan on getting their first set of 100 utensils out to the students,” Senator Delorge said. “It’s targeted really well and I think it will be a great success.”

Both budget requests were approved by the senate.

The senate ended their meeting with nominations and elections to their committees and all were filled except the Old Town City Council Liaison and Multicultural Affairs Advisory committee, which will remain vacant until further notice.