UMaine is no place for Epstein accomplices: Rename the Mitchell Center

Home /Opinion/UMaine is no place for Epstein accomplices: Rename the Mitchell Center 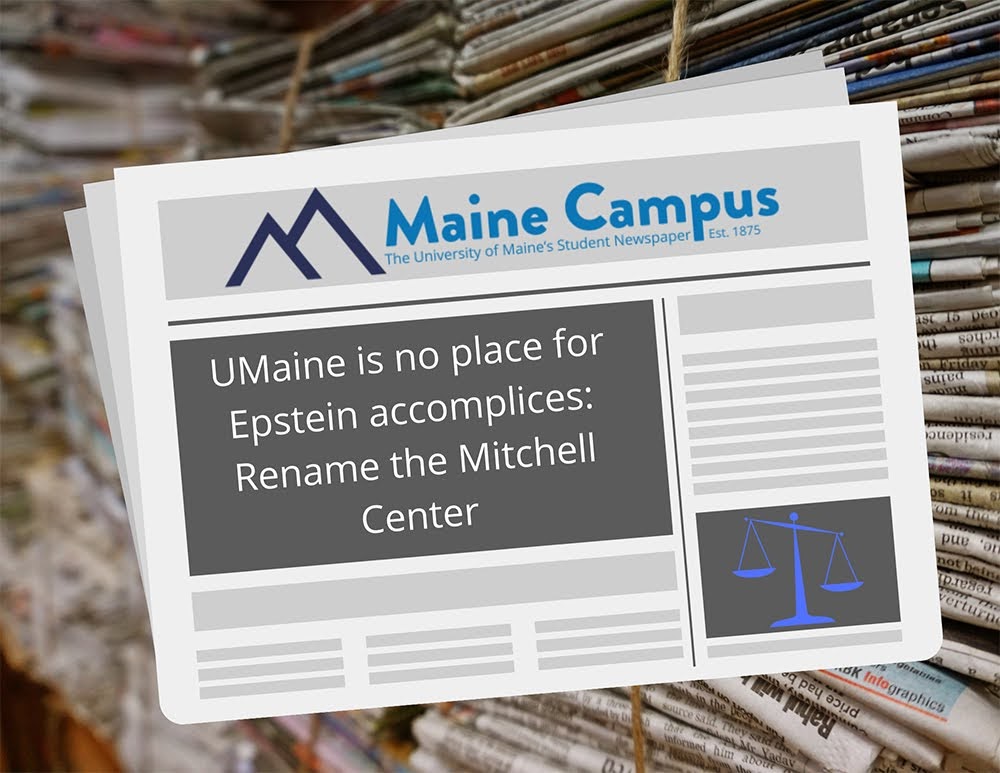 “My body was put on the banquet menu…for a powerful senator, George Mitchell…”

Virginia Giuffre’s shocking manuscript detailing her abuse at the hands of Jeffrey Epstein and others sent shockwaves across high-class society, but it has also made an impact in Orono, Maine. Former Senator George Mitchell, who is listed as a sexual abuser by Giuffre, is honored on the University of Maine campus through the Senator George J. Mitchell Center for Sustainable Solutions. This building must be renamed.

Mitchell, one of the most powerful people in Maine’s history, denied the allegations of participating in the sex trafficking of minors. He was also named in a 2016 sworn deposition alleging he received a sexual massage from a minor at Epstein’s Palm Beach Mansion. The conviction of Epstein and the fate of the others named by Giuffre all but destroys any integrity the former Senate majority leader can claim.

Amongst the other names listed is Prince Andrew, who has been recently stripped of his royal titles by Queen Elizabeth as he faces an ongoing trial for his actions. Jean-Luc Brunel has also been indicted for raping a minor. Former governor of New Mexico, Bill Richardson, has a long history of corruption and pre-existing allegations for paying a woman off to cover up an illicit affair.

Billionaires Glenn and Eva Dubin also face further allegations put forth by their former butlers for trafficking minors for sex. Eva, Epstein’s ex-girlfriend and Glenn defended Epstein during his 2008 trial, which resulted in Epstein becoming a registered sex offender. After the conviction, the Dubins wrote a letter stating they were “100% comfortable” with having Epstein around their three young children. It was subsequently reported that Epstein had an interest in marrying their daughter that he had been “especially close” with since she was twelve years old, of which the Dubins were aware.

Epstein had twelve phone numbers and two addresses for Mitchell in his infamous “Blackbook.” In a 2002 New York Magazine profile of Epstein, where he lauded Mitchell as the world’s greatest negotiator, Mitchell stated, “I would certainly call him a friend and a supporter.” This profile was written two years after Mitchell’s “friend”  began grooming Giuffre after meeting her at Donald Trump’s Mar-a-Lago club, and many years after Epstein first became an active pedophile.

In last year’s trial of Epstein’s co-conspirator Ghislaine Maxwell, where she was found guilty on five of six counts, her pilot testified to seeing Mitchell on Epstein’s private planes. These planes had nicknames such as the “Lolita Express.” Mitchell was listed on Epstein’s flight logs multiple times in a stretch between 1994 and 1998.

Mitchell’s Epstein connections have led many in Philadelphia to speculate as to whether those played a role in the Archdiocese of Philadelphia’s choice to put Mitchell in charge of their fund to compensate victims of sexual abuse at the hands of clergy. As a lawyer for many victims put it, “it’s just more of the same.”

Mitchell is a known associate of a prolific pedophile and human trafficker. Giuffre is to be believed and her story is damning. To keep his name on any building on this campus would not only show contempt for the victims of Epstein, but any victims of sexual assault who attend this university.

The Water Resource Center was renamed The George J. Mitchell Center for Sustainable Solutions in 2000. It can, and should, be renamed again. The eponymous George Mitchell does not actually fund the center (he made a one-time donation around the time it was renamed after him), and it is merely named to honor him. The renaming of Williams Hall, formerly named Little Hall after a noted eugenicist, offers precedent for this type of move.

Considerations for the renaming could be famed environmentalist Rachel Carson, who summered in Maine, or this could be an opportunity to work with Maine’s Native American tribes to rename the center after a leader in their community.

Regardless of what the new name would be, the exigence for the renaming is indisputable.  No building on campus should be named after a sexual abuser, much less one with an “Epstein scandal” section on his Wikipedia page.