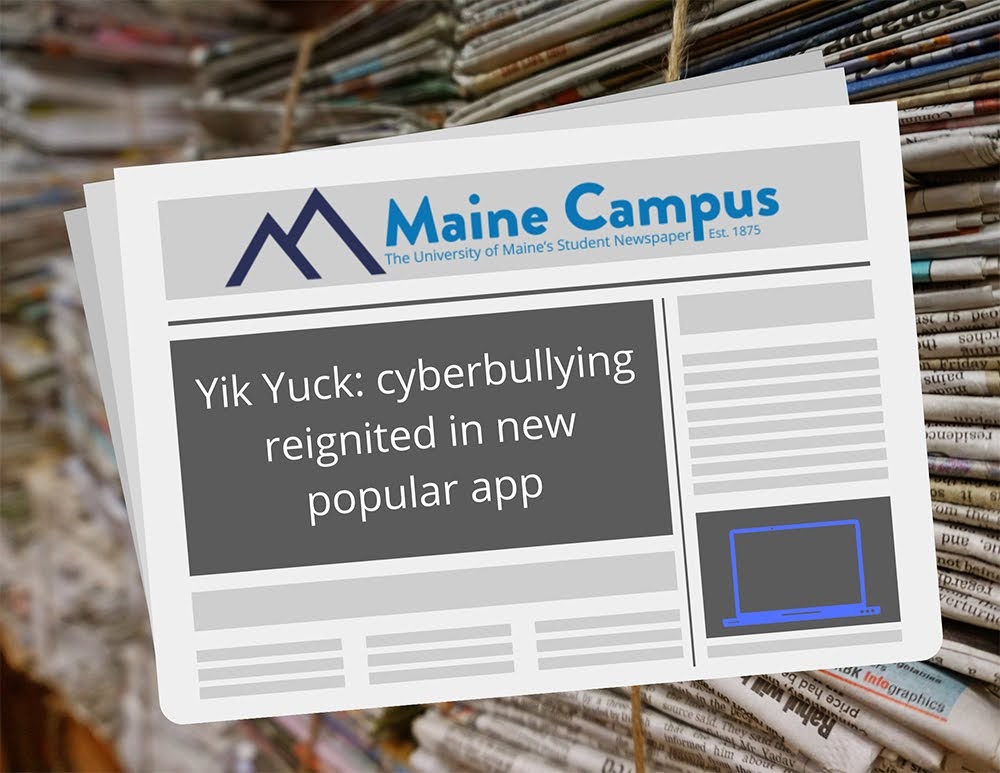 There is a new form of cyberbullying taking hold of the University of Maine and its students. Yik Yak, an app that allows users to create and view discussion boards anonymously within a 5-mile radius, has skyrocketed in popularity in the last year. Posts from this app have appeared on multiple UMaine meme Instagram accounts and usually talk about events that have happened in Orono or at the University of Maine, instigating some shared comradeship. Some posts are as harmless as what flavors of rushes Aroma Joes is out of that day or a simple joke about the lack of salt on the sidewalks and the number of potholes strewn throughout UMaine’s campus, but some are as concerning as cries for mental health help or slandering fellow peers.  The Ask.fm copycat was originally launched in 2013 and was relaunched in 2021. Perhaps there was a reason that it was discontinued.

Vanessa Dunn, a senior at UMaine and a faculty member at the New Balance Recreation Center, has been a recipient of slandering posts on the app.

“There have been a few posts about me that started out more innocent and then started getting a little more concerning. The first first couple of posts did not use my name but referred to the blonde trainer at the rec and was showing interest in her, and I was the assumed person in that post. I didn’t think much of those posts, other than feeling weird about the idea of people watching me while I was working out. Then a couple of weeks later posts were made about me using my name, saying that they were watching my social media and learning everything they could about me. This made me extremely uncomfortable because I felt like I had to go through my social media and make sure everything was private and didn’t feel safe without knowing who was watching me”, says Dunn.

Approximately 4 in 10 Americans have personally experienced online harassment, and 62% consider it a major problem, according to Pew Research Center.

These posts are being made about real people. People are being called out by name and made fun of or talked horribly about without knowing who is saying these things or how to get the post taken down. Yes, there are upvotes and downvotes which rank the popularity of the posts as well as a space for comments/responses to the post, but usually by the time the post is actually taken down, the damage is already done.

“The thing that any app creator has to understand is that if you’re letting people post stuff anonymously, it is going to go in a bad direction regardless of intent”, continues Dunn.

There needs to be more productive guidelines and regulations put into place regarding safety and language when using the app. It is the responsibility of the app creator and the company behind the app to regulate what is being said and to quickly remove any slandering posts in order to ensure a safe online community for everyone.

83% of young people believe social media companies should be doing more to tackle cyberbullying on their platforms, according to DoSomething.org.

This app is reigniting a toxic cyberbullying culture amongst UMaine students that has already been being fought against since the beginning of technology and online profiles. There is already so much hatred in the world, especially within social media apps that already exist. Creating an app that is completely anonymous and has little to no regulation of what is posted is irresponsible on the part of the app creator and those that continue to run it. Yik Yak should have stayed in 2013.