The Black Bears return to the diamond in Orono 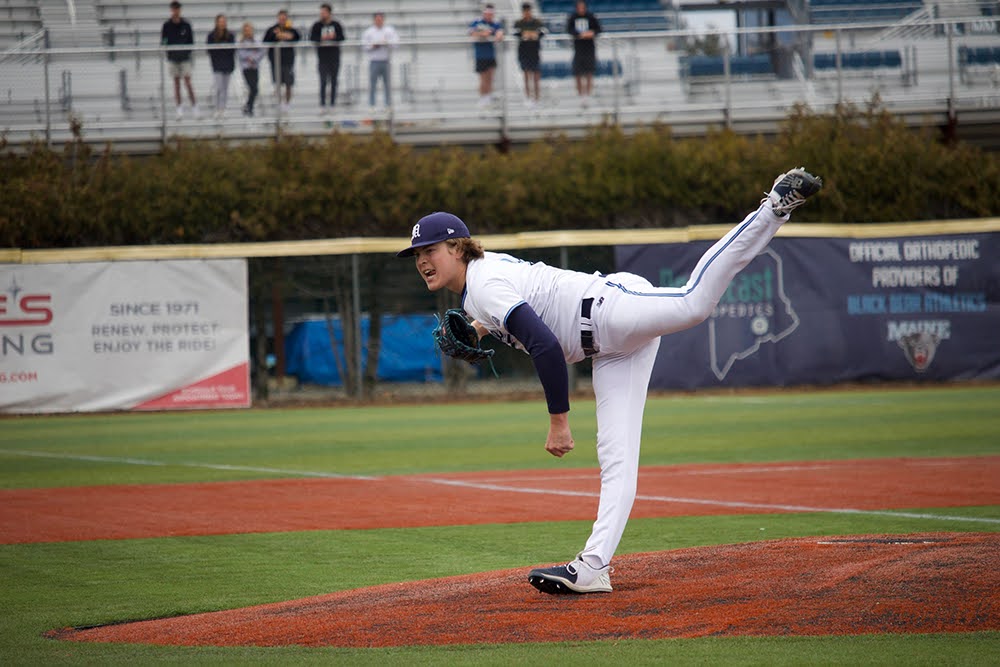 For the first time since May 18, 2019, the University of Maine’s men’s baseball team played in front of fans in Orono, Maine Friday evening. The 2020 baseball season was shut down before UMaine had any home games due to the pandemic, and the effects carried over into the next year as all the home games in the 2021 season were fanless.

The Black Bears had already played 17 road games this season and possessed a 6-11 record before returning to Orono. Their schedule is usually front-loaded with road games every year due to winter weather running well into March in Maine.

“It’s really nice to be back home, it’s really nice that there’s no snow on Mahaney as well, so that makes a big difference,” sixth-year UMaine head coach Nick Derba said about their return to Orono.

The bats had been hot for UMaine leading into this opening series, as in the previous weekend they put up 37 runs in a three-game sweep of Binghamton University.

Their offense continued to rake when they took on Stony Brook University on Friday. Fifth-year first baseman Joe Bramanti started off the scoring early by driving in second-year second baseman Quinn McDaniel with a single to right-center field in the bottom of the first inning to give UMaine a 1-0 lead after the first.

A lead-off triple on a line drive down the right-field line by fourth-year catcher Ryan Turenne started the offense, and fifth-year right fielder Jordan Schulefand drove Turenne in with a single to cut the Stony Brooks lead to one with the score at 3-2.

Schulefand followed up his hit by stealing second base, putting himself in scoring position. Fourth-year centerfielder Jeff Mejia drove Schulefand in with an infield single to tie the game 3-3. First-year designated hitter Jeremiah Jenkins’s single advanced Mejia to third, and McDaniel drove Mejia in to regain the lead for the Black Bears 4-3.

The fourth inning proved crucial for UMaine as they exploded for five runs, doubling their run total in the game. Bramanti and Rainess both drove in runs with singles, then Turenne hit a three-run home run over the right field wall to make the score 10-3. This homerun proved to be the difference for UMaine when it was all said and done.

Opening day starter, fifth-year pitcher Trevor Labonte had a suboptimal game but lasted 4.2 innings. He picked up the first two outs of the fifth inning, before loading the bases with a walk. With the bases loaded, Labonte surrendered a two-run single to Stony Brook making the score 10-5. He ended his night by loading the bases again with another walk.

Derba called on third-year pitcher Leif Bigelow to attempt to get an ever so elusive third out for the Black Bears. Bigelow walked the first batter he faced with the bases still loaded, bringing in another run for Stony Brook and making the score 10-6. UMaine’s lead was now reduced to four. Bigelow was however able to pick up the final out against the next batter to get UMaine out of the inning.

The score remained 10-6 into the seventh inning, with Stony Brook on the rise. Second-year second baseman Evan Fox blasted a two-run home run out of the park, cutting UMaine’s lead to two. This caused Derba to pull Bigelow and introduce fifth-year closer Matthew Pushard into the game with two outs needed to get out of the seventh inning.

UMaine surrendered another run in the inning, but with Stony Brook having two runners on base, Pushard was able to force a crucial groundout to escape the seventh inning with a one-run lead and the score at 10-9 with UMaine clinging on to their lead.

UMaine was unable to give Pushard any run support the rest of the way, but he didn’t need it. Pushard locked the game down by throwing two scoreless innings en route to UMaine winning the game 10-9 and continuing their hot in-conference start, as their record in America East play after Friday sat at 4-0.

Saturday, however, saw the Black Bears drop their first in-conference game. UMaine fell to an early 1-0 deficit in the first, and Stony Brook never gave up their lead. The Black Bears never seemed to get going offensively and Stony Brook went up 2-0 in the top of the sixth. The bottom of the sixth saw Jenkins notch one back for UMaine as he hit a home run over the wall in right-center field, making the score 2-1.

In his relief appearance, second-year UMaine pitcher Noah Lewis seemed on point, striking out three of the four batters he faced in the seventh inning. But it all fell apart for him in the eighth as Stony Brook scored four runs. Two coming off of a two-run home run by left fielder Matt Brown-Eiring, which put the score at 6-1 Stony Brook. Mejia drove in Rainess for a run in the bottom of the ninth, but it was too little too late for a comeback, and the Black Bears fell 6-2.

“The bats are going to get hot and cold time to time, but we have to be able to scrape together some runs, you know, more than two runs in a game,” Derba said when asked about his team’s offense on Saturday. “What we’ve had success doing is hitting fastballs and staying in the zone, and we really didn’t do that today, and we kind of went out and played into a lot of their strengths.”

UMaine first-year pitcher Caleb Leys picked up the loss today, but was decent, only surrendering one run over five innings pitched.

“Trevor had probably his worst start of the year yesterday as far as stat line goes, seven walks over four-five innings, but he pitched. Both of those guys competed and never backed down,” Derba responded when asked his opinion on the performance of his starting pitchers in the series after Saturday’s game. “That’s really the big thing for me, and Caleb didn’t have his best stuff by any means today, but was able to give us a chance to win. Roll a starting pitcher out there, the only thing you want is that they give you a chance.”

Stony Brook went on to take the series with an 8-2 win on Sunday. The UMaine bats remained cold, only picking up five hits on the day. UMaine’s record now sits at 7-13 overall and 4-2 in America East play.

UMaine’s next series will be on the road at the University of Maryland, Baltimore County next weekend for three games in the America East play.