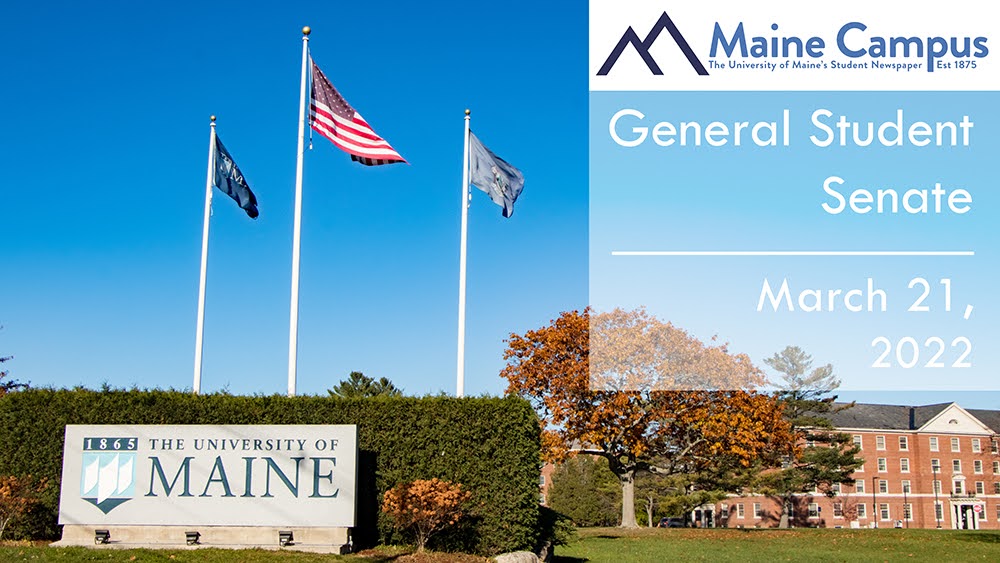 On Tuesday, March 8, the University of Maine General Student Senate (GSS) held their final meeting before the start of spring break to speak with multiple clubs and discuss funding requests.

Mainely Voices is one of the many acapella groups on campus and was also one of the many clubs to be impacted by the COVID-19 pandemic. This resulted in a major drop in membership for the club and now they are working to rebuild as they have obtained more membership this semester.

“Unfortunately we were victims of circumstance with the pandemic,” Walsh said. “Last semester we only had nine members so we were so close to the 10 person requirement so now we are trying to make good on that and get back into compliance with student government.”

According to Walsh, the group is back up to 16 members which is an ideal number for the singing group. After a majority vote, GSS approved the groups’ request for final recognition.

Representatives from the Black Bear Beekeepers were also present as they requested funding for new materials for the club. The group, which was started in the fall of 2019, maintains eight hives on campus and got their start from donations from the UMaine science department after a bee course was terminated at the university.

“We have received a lot of start-up donations that have helped our club maintain where it is until now but we are looking to get new club materials so that we can better support the bees on campus,” a representative to Black Bear Beekeepers said.

The club received lots of support from GSS as multiple senators weighed in.

“This is an absolutely charming club and I think we should continue to fund their continued existence and pass this motion,” Senator Hamill said.

“The beekeepers on campus are a fantastic group, not only are they helping students learn but also giving back to the community by donating honey to the Black Bear Exchange,” Kelly said.

The Black Bear Exchange is an on-campus food pantry and clothing exchange program at UMaine and, as Kelly highlights, the Black Bear Beekeepers are one of many clubs that donate to the program.

After a vote, the senate approved the funding request in support of the beekeepers.

Aquaculture club was set to be present during the meeting but according to VP Kelly, the group failed to attend their event management meeting so a stipulation was added to their funding request saying that the senate could not consider it until the group completed their meeting requirements.

It was also revealed during the senate meeting that Peter Alexander, a former candidate for Vice President of UMSG for the 2022 executive committee elections, was disqualified from running alongside presidential candidate Alyssa Ciausllo.

Voting for the executive elections occurred on Wednesday, March 10, following the senate meeting, but Alexander was no longer on the ballot as he failed to meet required deadlines.

According to Fair Elections Committee Chair (FEPC) Jacob Chaplin, Alexander failed to submit his expenditure report on time, which is a report of the money you spend on a campaign.

“This year I was very clear that I would be sticking to the guidelines and would be holding people accountable strictly to those deadlines,” Chaplin said.  “I uphold FEPC guidelines as they are written and he still ha[d] the opportunity to run as a write-in candidate,” Chaplin said.

Alexander did successfully complete all of the requirements to run as a write-in candidate, though he was not listed as an official candidate during Wednesday’s election.

Inauguration occurred on Tuesday, March 22, in the Wells Conference Center at 5 p.m. and Vice President for Student Life and Inclusive Excellence and Dean of Students for UMaine, Robert Dana, spoke at the inauguration.

According to President Zachary Wyles, the senate will also begin Maine Day Committee meetings the week following spring break. Maine Day is on Wednesday, April 27 and the senate has yet to reveal when they will release the name of the Maine Day concert headliner.