We don’t report about Syria like we do Ukraine 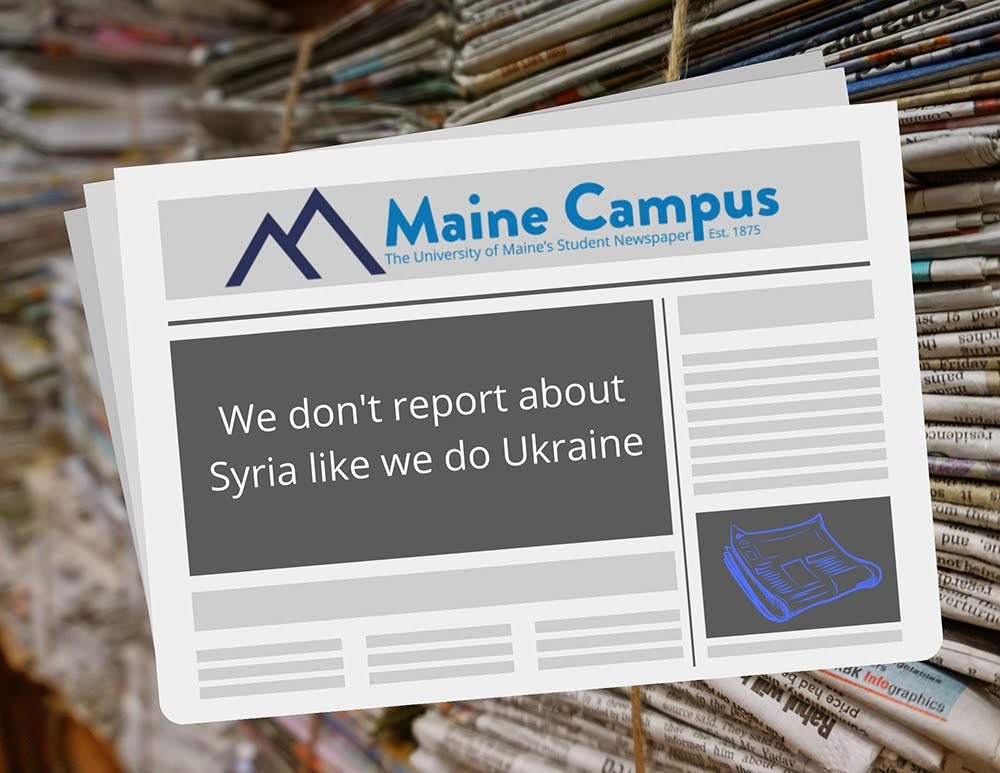 It is crucial to question the involvement of the U.S. in foreign countries and the subsequent responsibilities the nation has to aid refugees. People from Africa, the Middle East and Central America flee wars and catastrophes that the U.S, had a hand in shaping. However, when western media distorts the portrayal of the conflicts depending on the narrative that best fits U.S. involvement in these affairs, it directly affects our attitudes toward refugees. Public approval of refugees from the current Ukrainian crisis stands in stark contrast to general support for Syrian refugees over the last eleven years.

Beginning in 2011, the Syrian Civil War forced nearly 11 million people to flee their homes, and the great majority of the refugees are in Lebanon, Turkey, Egypt and Jordan. However, these nations struggle with the lack of infrastructure needed to support the overwhelming number of people. During his administration, former President Barack Obama promised to accept 10,000 refugees in 2016. Fox News released several articles in between 2016 and 2017 perpetuating dangerous ideas that the refugees could be potential ISIS placements and terrorists.

Western media’s portrayal of Syria and the general reporting of the situation is entirely different from what we hear about Ukraine. A recent Washington Post article dives into the controversies and dangers that the differing portrayal has on our overall attitude toward the situation.

“[Ukraine] isn’t a place, with all due respect, like Iraq or Afghanistan, that has seen conflict raging for decades,” Charlie D’Agat, a CBS correspondent, said. “This is a relatively civilized, relatively European — I have to choose those words carefully, too — city, where you wouldn’t expect that or hope that it’s going to happen.”

One of the clearest distinctions in reporting between Ukraine and Syria is the length that reporters go to ensure Ukrainians are seen in a humanizing light. The inability, or perhaps refusal, of the media to portray conflicts in the Middle East and elsewhere in the same way tremendously affects how we understand the conflicts and attitudes toward those fleeing.

The Russian invasion of Ukraine is clearly a humanitarian crisis. As of this week, over 3.6 million Ukrainians have fled Ukraine. A majority of Ukrainians are going to nearby countries such as Poland and Moldova, and most will stay within the European Union.

“I will welcome Ukrainian refugees,” President Biden said in a press conference. “We should welcome them here with open arms if they need access.”

There has been a clear, unified response and support even within our own university campus. The University of Maine Honors College recently sent out an email advising students on how to best show their support for Ukraine during this time.

Readers and consumers need to recognize the casual and blatant racism that exists between media coverage of events in different geographic locations and the extent that it will have on the attitude toward refugees. It is the job of the consumer to be aware of global bias and equality — or lack thereof — in our nation’s political policies. However, the issue extends beyond how the media reports on international events. The absence of non-Western history from our general education system is a failure to recognize the part our nation plays on the global stage. Ultimately, what one does with the information they consume from various sources can influence voting decisions.