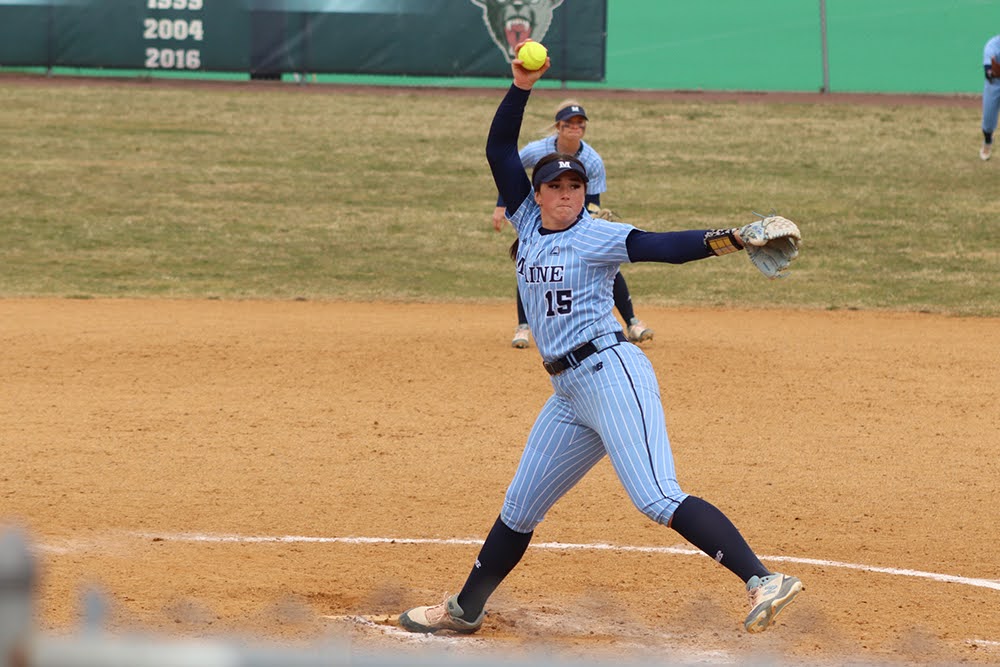 “I thought today’s games were some of the best that we have played all year,” coach Jordan Fitzpatrick said after the games on Saturday. “We were in both games the whole time. Unfortunately, we just didn’t get those timely hits that we needed.”

It has been a long season for the Black Bears. Coming into this game, they held a 5-27 record as they just came off a 7-2 loss to UMass Lowell on Wednesday.

UMBC’s season has been the opposite of the Black Bears as they entered this game 21-6, coming off of two victories against the St. John’s University Thunderbirds.

In the first game, the Black Bears fell to the Retrievers 1-0 in a defensive stalemate. The Retrievers scored the game’s only run when leadoff batter fourth-year catcher Karly Keating hit a solo home run at the top of the third, and that was all that was needed to win the game.

First-year pitcher Kya Matter got the win for UMBC after throwing a complete seven-inning shutout and only surrendering two hits in a terrific outing for her.

Fourth-year pitcher Emily Reid and first-year pitcher Alexandra Grutich pitched the seven innings for the Black Bears, only giving up one run but also only getting one strikeout all game against the Retrievers.

The second game did not start any better for UMaine. Fourth-year Retrievers pitcher Courtney Coppersmith hit a solo home run, giving UMBC a 1-0 lead. In the fourth inning, the Black Bears finally scored for the first time all day thanks to an error in the outfield that led to fourth-year shortstop Kelby Drews reaching third and sending fourth-year second baseman Grace McGouldrick home. Neither team scored from that point on, and the game went into extra innings. In the ninth inning, UMaine made a costly mistake. Third-year Black Bear pitcher Caitlin Fallon sent a wild pitch, which that caused fourth-year pinch-runner Chloe Obispo to reach third and fifth-year third baseman Anna Loncher to score. One batter later, Obispo made it home on a sacrifice fly from fourth-year shortstop Casey Turner, and that would be enough to win the game for the Retrievers 3-1.

Fallon goes to 2-2 on the season after pitching all nine innings. Outside of her two mistakes, she had a very solid day, only giving up six hits and striking out five batters, but her wild pitch at the end ended up being one mistake too many.

“Fallon stood out today,” Fitzpatrick said after the second game. “She’s really only pitched a few innings here and there all season as she was coming back from injury, and today she really stepped up. She threw all nine innings and competed each and every pitch. I’m very proud of her as I know she’s been working hard to come back.”

Coppersmith, like Fallon, pitched the full second game as well. Outside of the one run given up, she was in full control pitching, and she only gave up four hits all game for the Retrievers.

While UMaine was able to hold their own pitching-wise, they could not capitalize on it offensively as they struggled to get hits in both games, only combining for six all day.

“I really think today for us was just having better at-bats and timely hits when we needed them,” Fitzpatrick commented on why the team fell short on Saturday. “We had times where we watched too many good pitches go by and then times where we swung at junk. We just needed to do a better job jumping on the good pitches, leaving the bad ones alone and not putting ourselves in a hole.”

On Sunday the Black Bears pulled out an impressive win, with the bats finally heating up in an 8-3 victory over the Retrievers. McGouldrick and Drews led the Black Bears to victory, each picking up two hits and two runs on the day. Drews also totaled two RBIs.

Fourth-year pitcher Gabbie Siciliano picked up the win. She pitched four innings, striking out five batters while surrendering two runs. Reid came in for relief of Siciliano and she closed out the game by pitching the final three innings, picking up her first save of the year.

The Black Bears’ record now sits at 6-29. Their next matchup sees them face off against the Binghamton University Bearcats at home in a three-game series starting this Saturday, April 23 with a doubleheader, followed by a single game on April 24.

Make the student voice heard: Vote for Mike Tipping
Revolution get off to a rocky start in 2022