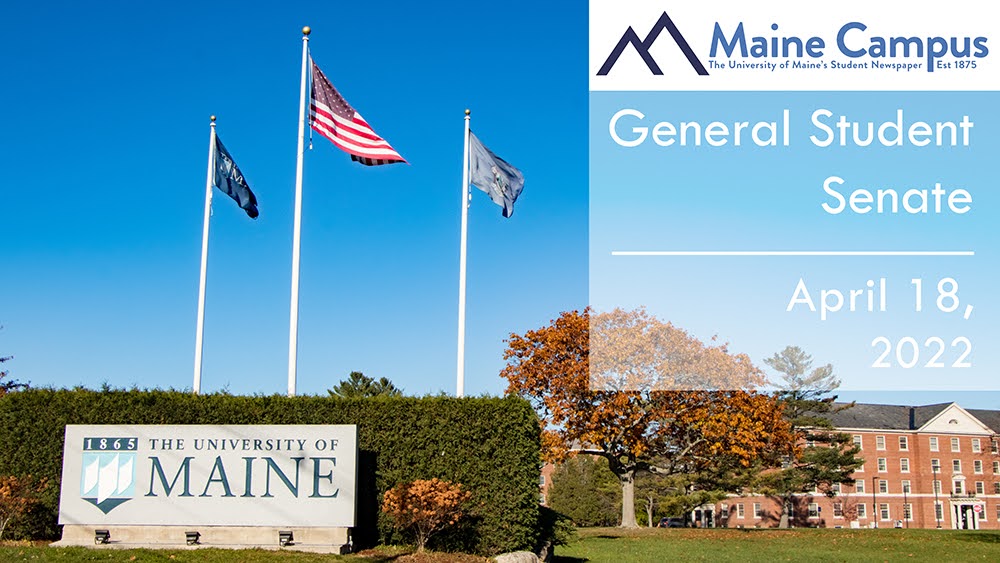 “If you look upon the top of that agenda … This is the 1500 meeting of the General Student Senate, which is pretty cool,” Zachary Wyles, the president of the University of Maine Student Government (UMSG), said.

Neville 100 was filled with balloons and cake as the students celebrated this milestone.

The celebrations continued as they opened the meeting with the appointment of a new senator. UMaine student Justin Molina was officially sworn in as an official senator of GSS. Molina is a third-year student at UMaine studying elementary education and childhood development and family relations.

“I am very passionate about the field of education, as well as the development of youth,” Molina said. “I think representing the program would be a great opportunity to expand my knowledge of the college I am in, as well as give voice to those a part of it.”

Molina is also a very active member of the UMaine community as the president of UMaine Men’s Volleyball Club Team and the Social Chair of the Alpha Sigma Phi fraternity.

“I am constantly organizing things for my club and fraternity and it is an interesting thing to now be a part of the higher organization that has overseen the activities I am a part of,” Molina said.

Some members of the senate also got to meet with the Chancellor of UMaine, Dannel P. Malloy, during his visit to campus on Tuesday.

“We had the excellent opportunity to provide the chancellor with some feedback on what can be done to make student life better for the University of Maine,” Wyles said.

Malloy’s visit on Tuesday was a part of his Spring ‘22 Campus Tours of all the UMaine System universities, with a focus on gathering input for the system’s first five-year strategic plan in more than a decade.

Wyles also highlighted in his report that he is going to be attending the next Parking Services Committee Meeting in his fight against increases to student parking permit prices.

The senate also discussed updates for the upcoming Maine Day and the exciting announcement of this year’s headliner at the Maine Day Concert.

On Monday, April 11, UMSG officially announced that performer Jack Harlow will be the main event of this year’s concert. The 24-year-old singer is currently on tour performing at college campuses and will be making his way to UMaine before the official start of his tour at UMass Lowell.

This is the first Maine Event concert in two years since the COVID-19 pandemic halted the production of the annual concert.

The concert is going to be on April 26 and Harlow will also be joined by performers Waka Flocka Flame and Grandson.

According to Wyles, they are also waiting on quotes for potential events for Maine Day, including a potential zip line across the mall and human bowling.

A funding request from Greek Life was also presented to the senate. Representative to the Interfraternity Council, Conor Foley, spoke with the senate as Greek Life was requesting funding for their All Greek Formal that took place on Friday, April 15.

“It’s the celebration of the end of semester for all of Greek Life,” Foley said.

After a clear majority vote, the senate approved the funding request.

The senate also gave out multiple awards to recognize the hard work the students of GSS have put into this semester.

The Vice President for Student Leadership of GSS, Alyssa Ciasullo, handed out the awards. The first award was the Most Improved Award.

“This is a senator who just picked it up and started chairing a committee and is active in the senate,” Ciasullo said. Senator Owen Hubda was recognized with this award.

According to Ciausullo, the second award still has a working title but is meant to be awarded to a student that represents the heart of student government. Senator Conor Bray was the recipient of this award. Bray was also recently elected to be the vice president of UMSG and the president of GSS for the 2022-2023 school year.

The students will be recognized officially at the leadership award ceremony later this semester.

The senate transitioned out of their official meeting into their annual budget meeting, where they finalized and presented the proposed 2022-2023 annual rolling budget. The budget includes the annual budgets for all clubs requesting an office budget, the annual budgets for representative boards and community associations, student government, all sports clubs and many other important student funding needs for the university.

The senate will also be conducting interviews this upcoming week for the open positions on their executive board.