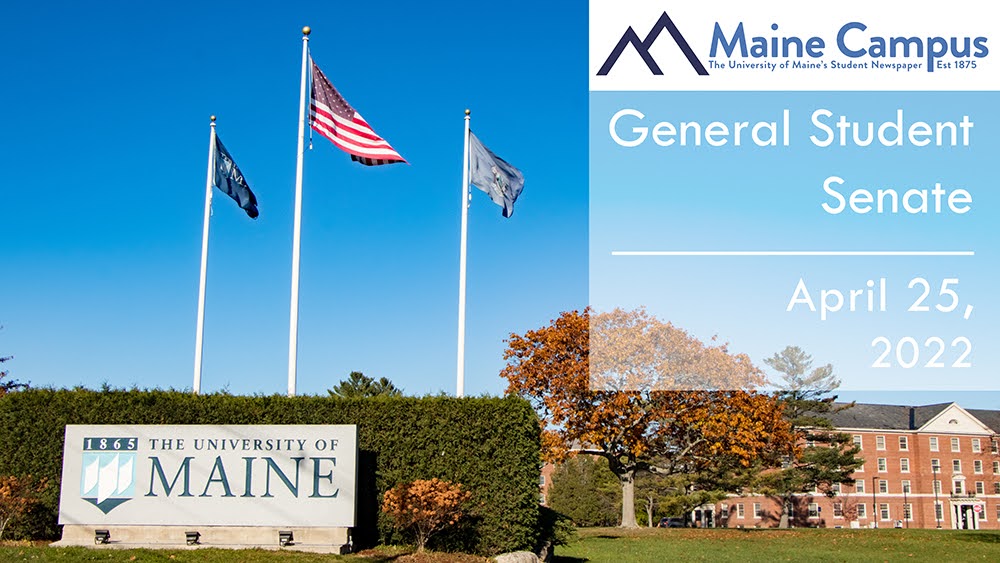 On Tuesday, April 19, the University of Maine General Student Senate (GSS) held their final meeting of the spring semester. They discussed many important issues, such as updates to the Maine Day concert.

The senate opened the meeting with a brief presentation from Dan Dixon. Dixon serves as the campus sustainability director for UMaine and a research assistant professor with the University’s Climate Change Institute.

“I’m here to talk to you about carbon emissions and the university’s commitment to net zero emissions by 2040,” Dixon said.

Dixon is involved in a major university project to move away from fossil fuels and utilize renewable energy to power the campus. According to Dixon, this project is six years in the making and is centered around rebuilding the current steam plant with boilers that burn renewable energy.

“The university administration has made a commitment that we are going to move away from fossil fuels and we’re not going to build any new fossil fuel infrastructures,” Dixon said.

According to Dixon, they originally teamed up with Consolidated Edison (ConEd), one of the largest investor-owned energy companies in the United States. That deal fell through and their new partner is Honeywell International for the initial design of the project. This partnership was featured multiple times in the Portland Press Herald.

According to Dixon, they completed the design phase and are now working on a website that is going to be released this upcoming fall that is going to highlight the efforts of the project and will be an outlet for community feedback.

“Once the official website has been made and the official story is out … then I could really use the UMSG’s help getting the word out to the whole student body and promoting what we are trying to do,” Dixon said.

Another major topic covered during the meeting was some last minute changes to the Maine Event concert, as they had to relocate it to the Cross Insurance Center. Vice President of Student Entertainment for UMSG Dylan Taplin spoke on these changes.

“We had to make the decision to either cancel the concert or move it to the Cross Insurance Center,” Taplin said.

The Maine Event concert featuring Jack Harlow was originally planned to be held at the Hilltop Lot on campus.

There were major concerns over being able to handle the large crowd and the fear of local high school and college students that do not attend UMaine attempting to forcefully enter the concert.

“Unfortunately with 50 security guards, even though it’s a bump up from the 36 we had in 2019, they are not equipped to handle thousands of students and an angry mob,” Taplin said. “Given that we were already pretty far into planning this concert we did not want to cancel, so we made this decision.”

Students entering the concert will have to provide their UMaine identification cards as well as proof of vaccination status. According to Taplin, there will also be student life staff monitoring parking lots and nine Bangor P.D. officers plus backup from the state police.

“If there are crowds of people not going to the concert [or loitering], police will be called,” Taplin said.

UMSG is also providing buses for students to take to and from UMaine.

“We are about to deliver the best Maine Day concert that UMaine has ever had,” Zachary Wyles, the president of UMSG, said.

Any future updates will be posted to the UMSG Instagram page.

This was the final meeting for some of the UMSG and GSS staff, including Wyles and Vice President of UMSG Elizabeth Davis.

“I’ve gained so much valuable experience and valuable relationships,” Davis said. “I’ve really appreciated being a part of this position and getting to know all of you.”

Wyles also took a moment to reflect on his experiences with student government at UMaine.

“I’ve been in student government for all of my four years at UMaine,” Wyles said. “I watched all of you join in along the way and I think it goes without saying that watching all of your transformations as leaders has made me probably one of the most proud presidents in student government history. I’m sad that it’s ending but I’m very happy to see where you guys are going.”