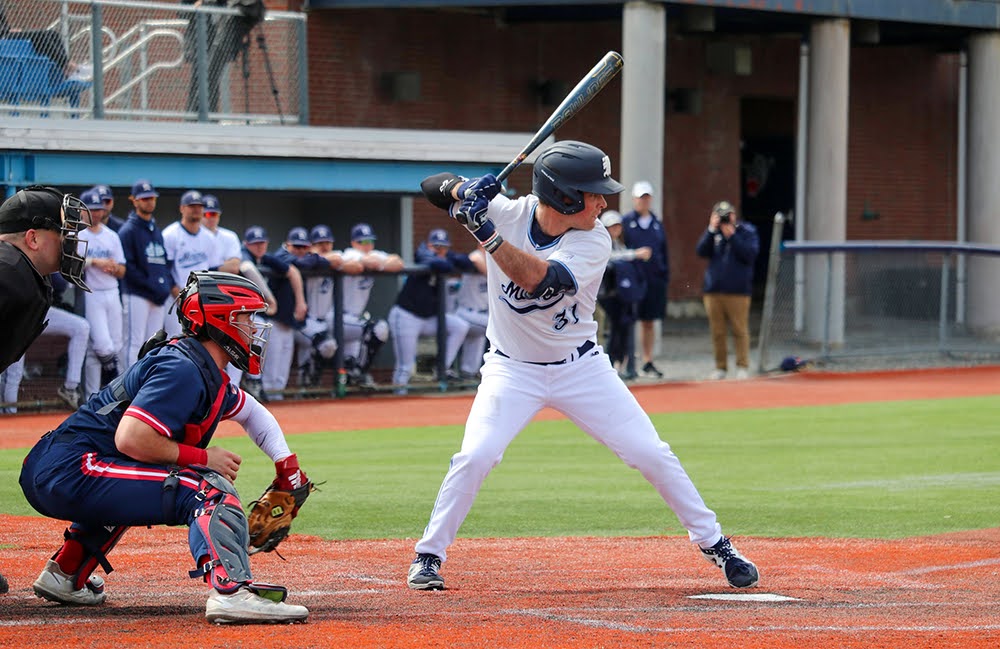 With baseball season well underway, the University of Maine men’s baseball team hosted the New Jersey Institute of Technology Highlanders at the Mahaney Diamond in Orono this past weekend. The three-game series saw the groups play games on Friday, Saturday and Sunday, with UMaine victorious in two of three. The Black Bears were coming off of a phenomenal weekend in Baltimore last week as they played the University of Maryland, Baltimore County Retrievers, sweeping their America East rivals with ease by scores of 17-1, 15-14 and 13-2. NJIT had nearly done the same, winning two of three in their previous series against UMass Lowell.

Fifth-year Black Bear pitcher Trevor Labonte took the hill in the opening game of the matchup opposite third-year Highlander ace Ryan Fischer. Both pitchers managed to hold down the fort for the first couple of innings, but the third spelled disaster for Labonte and UMaine. An errant throw on a routine fielding play saw NJIT’s fifth-year infielder David Marcano reach home and open the scoring in the third inning. While the Black Bears fought to stop the Highlanders, a two-out triple off the bat of fifth-year right fielder Isiah Daubon extended NJIT’S lead to three going into the bottom half of the inning.

Another error in the infield gave the Highlanders their fourth run, as third-year catcher Luke Longo made his way home as a result of fifth-year utility man Julio Marcano’s single. Unwilling to fall any further into the hole, fourth-year catcher Ryan Turenne belted a sac-fly to right field that brought home his teammate, second-year middle infielder Quinn McDaniel, cutting the score to 4-1 after the fourth inning. The Black Bears managed to find some more success the following inning, with first-year infielder Jeremiah Jenkins and fifth-year infielder Joe Bramanti both driving in a run by way of a single and a sac fly, making it a one-run ballgame after five innings.

Labonte was pulled from the game in the sixth inning, putting in first-year hurler Colin Fitzgerald. Fitzgerald managed the game with ease, lasting until the top of the ninth. He was replaced by second-year pitcher Colton Carson, who finished the game on the mound for UMaine. Neither side was able to amount much offense over the final three innings, with NJIT eventually winning the opening contest by a score of 4-3.

Saturday’s game had much better weather conditions, with light cloud cover and a slight breeze setting the stage for a perfect spring matchup at the Mahaney Diamond. First-year pitcher Caleb Leys earned the start for the second matchup of the weekend, throwing a solid game for the first three innings. Opposite Leys, fourth-year starting pitcher Grant Vurpillat had just about the worst start to a game you could ask for. A two-run single in the first inning, courtesy of fourth-year outfielder Scout Knotts, set up the Black Bears fairly well for the rest of the afternoon, as the team continued to build on their lead.

In the second inning, fourth-year outfielder Jeff Mejia hit a single driving home second-year infielder Jake Marquez to extend UMaine’s lead to three. Marquez then started the scoring in the next inning, with his sac fly bringing McDaniel home to score and push the lead to four. Third-year third baseman Connor Goodman delivered the gut-punch when his long drive bounced over the head of NJIT outfielder Isiah Daubon and up against the outfield wall, allowing both Knotts and Bramanti to make their way home and add to the lead, making it 6-0 after only the third inning. The mark on the box score was enough for NJIT head coach Robbie McLellan, who pulled Vurpillat with two outs in the third.

Daubon looked to make up for his mistake in the previous inning, playing the count and earning a bases-loaded walk, bringing Julio Marcano home. NJIT wasn’t done there, as fifth-year first baseman, Nick Hussey drove home a run off of an RBI single. A two-RBI double from NJIT’s catcher, third-year Luke Longo, cut the lead down to only two runs heading into the sixth inning. UMaine’s head coach, Nick Derba, pulled Leys from the game after a five-strikeout performance, opting to bring in Carson for relief work for the second evening in a row.

NJIT’s fourth-year outfielder Andrew Elcock capitalized on the situation, laying down a bunt to advance two runners the Highlanders had managed to put on base in the inning. Carson fielded the ball for UMaine but unfortunately hummed the ball over near the opposing side’s dugout, and Hussey managed to make it home on the play. Soon after, David Marcano connected with a two-run home run that went well over the wall in left field, taking a one-run lead over UMaine with a score of 7-6. The move was enough for Derba to replace Carson with fifth-year pitcher Matthew Pushard, who closed out the contest.

UMaine did not allow the Highlanders to celebrate for too long though, as Bramanti crushed a two-run bomb of his own to bring McDaniel home and retake the lead at 8-7. Mejia had an RBI double in the seventh to push the lead to two runs until NJIT’s fourth-year infielder Jared Donnelly added a solo shot in the eighth inning. Marquez again found a way to put another digit up on the scoreboard for the Black Bears, driving home Bramanti on a single and paving the way for a solid victory.

Goodman found his own way to add a cherry on top of an already brilliant performance, nailing a 3-run double to give him five runs on the day. The score remained the same following Goodman’s exuberant swing and celebration, resulting in a 13-8 win for the Black Bears.

On Sunday the Black Bears clinched the series win with a 7-6 victory. They are now 12-14 on the season and their next game is against Thomas College at the Mahaney Diamond on Wednesday before traveling to the University at Albany for a weekend series on Friday.

Why you should watch ‘The Marvelous Mrs. Maisel’
Mitchell Sustainability Series continues with “The Forever Chemical: PFAS in Maine”