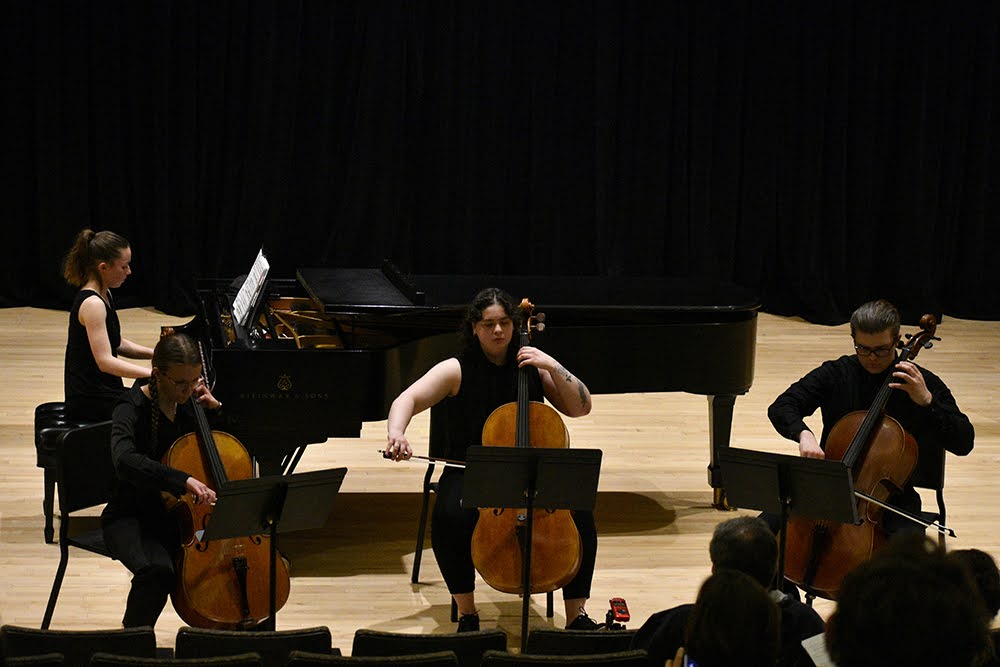 On Tuesday, April 5, the University of Maine School of Performing Arts congregated at the Minsky Recital Hall for the “Chamber Music” concert. Doors opened at 7:20 p.m. and the event began at 7:30 p.m. It was free to the public, and the performance involved a series of seven small wind and string ensembles. The musical pieces were short, powerful statements of emotion, and it was clear to the audience that the musicians spent hours practicing to perfect the literature that they performed.

“The Chamber Music performance is a concert presented by student groups who participate in MUO149 and MUP512, otherwise known as Chamber Music Class,” Noreen Silver, the director of the night’s event and instructor of Chamber Music, said.

“Chamber Music is music performed by small groups—anything from two to eight or nine players—who perform without a conductor, and with only one person playing each part,” Silver said.

It originated as a form of classical music for groups of musicians that performed in ballrooms or chambers. The music was composed for home consumption rather than for the church or theater. The pieces that were performed on Tuesday reflected that theme of home listening. The songs were soothing and very easy to listen to. Many of the pieces were composed of long, droning notes that accompanied a fast melody. Transitions into different themes and motifs were effortless and graceful.

“Audiences can expect a variety of music by composers from Telemann and Handel, to Ravel and Piazzolla,” Silver said. “Some groups include piano, such as the beautiful Requiem by David Popper for three cellos and piano. The program will start with French music performed on two pianos.”

The first piano piece was played beautifully. The dual piano players switched back and forth from melody to harmony effortlessly. The literature they performed initially sounded depressing and somber. However, as they got deeper into the performance, the music became hopeful. This was a common theme that all of the group’s songs had embraced. To the listeners the pieces sounded simple, but for the musicians it required intense concentration and dedication toward their piece.

“Chamber Music demands a high level of competence on an instrument, as well as the ability to work closely with other individuals,” Silver said. “It also develops the skills of studying music scores and listening to others.”

There was no director on stage, so the students had to listen and watch each other to maintain time and volume. The end result was a beautiful arrangement of music, something that can be enjoyed by everyone and should be heard at least once. What was surprising was how loud a quartet and quintet of flutes could get. The arrangement of the flute performances stirred an array of emotions. Each distinct part could be heard, no one was overpowering the other. Most notably was in the piece, “Suite in A minor,” where the alto flute player and bass flute player harmonized beautifully with their soloist. The soloist maneuvered the complex rhythms with ease creating a beautiful transition back to the group accompaniment.

“What I think separates chamber music from other modes of performance is intimacy,” Jacob Calles, a third-year UMaine student, said. “You have to be completely familiar with the music that all the musicians in the group are playing in a way that isn’t possible in large ensembles. It demands receptiveness and flexibility, skills that are probably essential to playing any kind of music but are difficult to practice outside chamber groups.”

Calles plays jazz piano, but got into Chamber Music so he could continue playing in small ensembles.

“With piano specifically, balance is a huge challenge,” Calles said. “You’re playing mostly with string and wind instruments that don’t have the pitch or dynamic range of the piano so it’s really easy to under or overplay.”

The performance that stood out the most was a three cello and piano accompaniment of “Requiem Op. 66.” Much like the flute ensembles, the cellos were each distinct with their parts so much so it was easy to hear the separate melodies. Their articulation was clear and vibrant. There came a part in the piece where after all three cellos were playing different parts of the chord to create a harmony, they all played a line that was monotone to create the effect that only one cello was playing. The reason for this had to be because of the volume. Each cello player was strumming the same soft strong note that caused the powerful bright note of one cello. The result was haunting. It was so distinct that someone who knows nothing about music could recognize the effect that it had on the audience.

There is one Chamber Music performance each semester. All the performers gave strong performances showing the hard work that they put into their art making the performance worth the hours of complex rhythms and synergy.

“​​All students in this concert are part of the music program in the School of Performing Arts,” Silver said. “Participation is by audition, and they get involved by contacting me.”

For more information about the Chamber Music performance, you can contact Silver at noreen.silver@maine.edu.