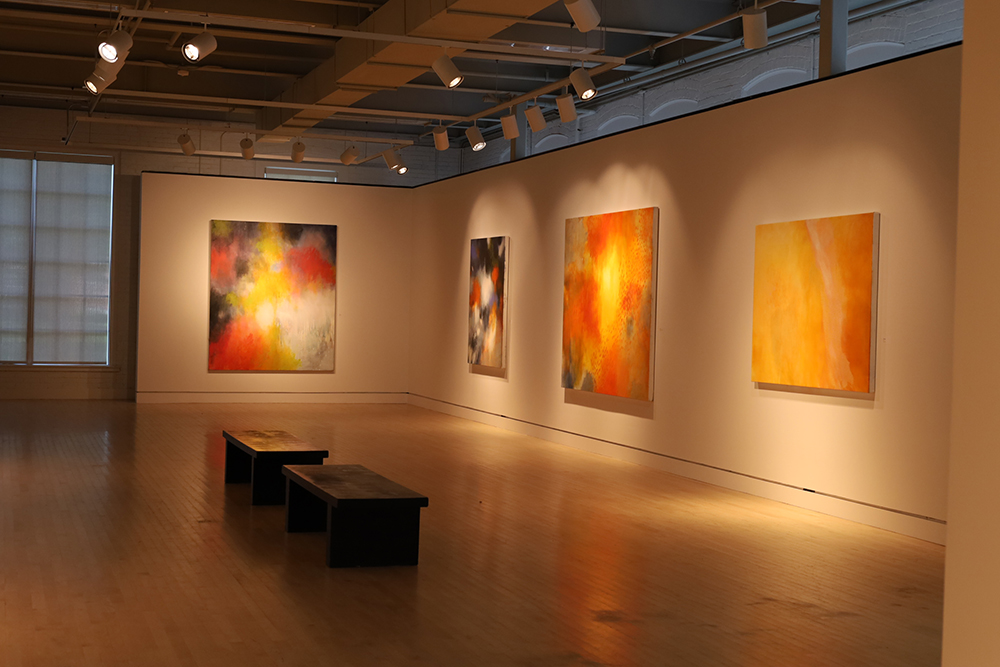 Michel Droge is a printmaker and painter from Maine. He recently unveiled the “Bright Fathoms” exhibit in Lord Hall here at the University of Maine. The exhibit features many abstract paintings that were inspired by the deep sea and the hidden mysteries in its dark depths.

“The Deep Sea is a vastly unknown and unmapped area. It is a place that until the last 50 years, was considered to be void of life. In fact, it is the very place where we now believe life on Earth began,” Droge said

The exhibit hopes to shed light on the hidden beauty that is in the depths of the ocean, hence the name, “Bright Fathoms.”

“The name, “Bright Fathoms,” expresses my desire to shed a light on what we don’t know about the deep sea and to share an awareness of the beauty and important ecosystem that is at risk in the next few years as major corporations are planning to mine this area of our planet for minerals and precious metals,” Droge said.

In addition to showcasing the beauty of the deep sea, the exhibit also hopes to bring awareness to the grave danger involved  with deep-sea mining and other environmentally unfriendly factors. Human impact on the sea is a big influence on this exhibit because deep-sea mining for minerals and precious metals could have very disturbing impacts on the deep sea in the next few years.

“Bright Fathoms” was also done in collaboration with Dr. Beth Orcutt a Senior Research Scientist at the Bigelow Laboratory for Ocean Sciences. She did not create any artwork, but she shared her research with Droge as well as videos of her deep-sea dives.

Orcutt assisted Droge in better understanding the science behind the fatal impacts that deep-sea mining could have on the underwater environment.

“I explored these ideas in the studio with painting and drawing to combine the science I was learning with the emotional responses I felt,” Droge said.

Some of the paintings feature bright “hot” colors such as oranges and yellows which could depict the heat coming from hydrothermal vents in the deep sea and the extreme conditions in which deep sea life can survive. According to Droge, those extreme conditions can entail very intense pressure and temperatures over 400 F. One of Droge’s oil on canvas paintings titled “Piezophilic Heart (life in extreme)” depicts the extreme pressure and temperatures with the yellows and oranges and sparse spots of blue. There are also dashes on orange paint that seem to show the movement of the sea. The painting as a whole looks hot to the touch and full of diversity despite the extreme conditions. It showcases a part of the sea that is not often thought or taught about even though the life there is debatably the most resilient of life in the sea.

There is also a piece done with graphite and charcoal that is in contrast with some of the other colorful paintings. This piece is dark and monochrome. It showcases the depth of the deep sea and how light penetration is little to non-existent. The gray-ish white shapes in the piece stand out and look like tentacles. There are some scale-looking shapes in the background as well. It is almost ironic that this is the piece titled “Bright Fathoms,” but it seems to shed light on all parts of the deep sea including life living in total darkness.

The “Bright Fathoms” exhibit provides a great opportunity for students and anyone interested to visit and gain knowledge on the deep sea. It is also a good way to support the research being done to prevent further harm to the deep sea ecosystem as a result of human impacts.

Droge has been working on the pieces in this exhibit since May of 2020. His motivation has been to spread awareness of the importance of our care and stewardship of this mysterious, and important ecosystem on our planet.