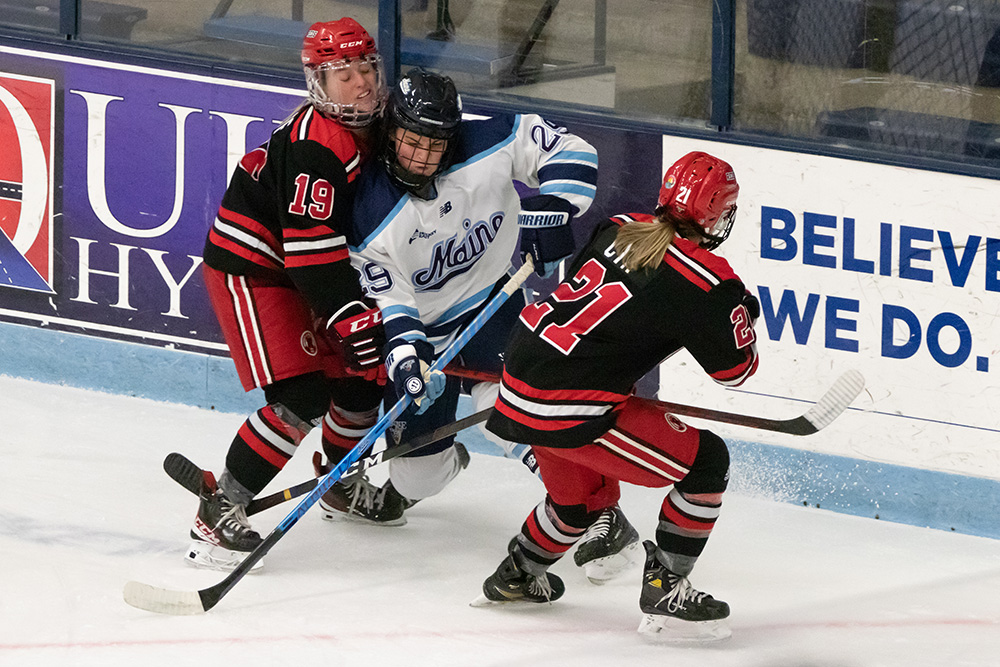 This past Saturday the University of Maine Black Bears women’s ice hockey team welcomed the University of New Brunswick Reds to the Alfond Arena for a last-minute tune-up before the start of the regular season this upcoming Friday. UMaine’s coaching group saw drastic alterations this offseason, with last season’s head coach Richard Reichenbach leaving the university and former U.S. Olympic medalist Molly Engstrom taking the reins in August. Reichenbach announced his resignation alongside his wife and the assistant coach of the team, Sara, in a personal statement just before Engstrom’s hiring.

The previous season saw the Black Bears navigate their way through the Hockey East tournament, upsetting the higher-seeded Boston College Eagles in the quarterfinals before heartbreakingly losing in the semi-finals to the Northeastern Huskies. Heading into the year with a fairly similar group to the season before, Engstrom’s squad certainly has the makings of a competitive team again. Maddie Giordano, a former forward, continued her tenure with the program in becoming an assistant coach for the year, a move that without a doubt makes the connection between coaches and players that much tighter.

The game, which happened in the early afternoon, led to a stadium filled with sunlight. Early on in the game, UMaine’s desire to win was evident early on, as the team put the pressure on New Brunswick’s starting goaltender, second-year Cassie McCallum. While the Reds mounted the occasional chance on UMaine’s goaltender, third-year Anna LaRose, neither side was able to break the deadlock at the conclusion of the first 20 minutes of action.

UMaine managed to outshoot the visiting side 9-2, but that statistic proved to be irrelevant just under three minutes into the second period. While third-year Jorden Mattison, who took over for LaRose as goaltender for UMaine in the second period, stood tall and produced a spectacular double save just seconds beforehand, a quick turn and rip from New Brunswick’s second-year forward Lauren Carter just above the right side faceoff dot opened the scoring with a powerplay goal and put the home side on their heels.

Needing to respond quickly, the Black Bears upped the tempo and pressed high into the Reds’ zone like a professional NWHL team. First-years Anna Caumo and Emma Gurnell linked up to feed fellow first-year forward Ava Stevenson in front of the net, before she was able to acrobatically maneuver around New Brunswick’s fifth-year goaltender Hailey Martens and put home a game-tying backhanded goal.

Shortly after, the Black bears doubled their lead.This time it was first-year forward Lilli Welcke who found the back of the Red’s goal to put UMaine in the driver’s seat 2-1. A sublime pass off of the stick of fourth-year forward Morgan Trimper met Welcke’s stick, as she was able to direct the puck behind Martens with style. Welcke wasn’t done there, as she found herself at the center of another scoring opportunity midway through the third period, this time beating New Brunswick’s fifth-year goaltender Kendra Woodland courtesy of a wicked snipe to earn her well-deserved brace.

However, it was not smooth sailing for Engstrom in the final 10 minutes, as countless penalties put the home side on the penalty kill for nearly a third of the last frame. A miscommunication led to an uncontested New Brunswick breakaway with four minutes to go, when third-year forward Melanie Drost picked her corner and lasered a shot glove-side-high to beat UMaine’s second-year goaltender Bailey Oakes, who had come in for the third period.

Two unfortunate penalties on UMaine with under three to go put the Black Bears on a 5-on-3 penalty kill for virtually the remainder of the game. To make matters worse, the Reds had pulled Woodland, creating a 6-on-3 situation on the ice. Oakes hugged her posts, and stood beyond tall to prevent any tying goals in the last few moments of the contest, eventually leading the Black Bears to a 3-2 victory. With a very good sample size to work with after that thrilling 60-minute contest, Engstrom certainly has her work cut out for her when finalizing her first regular season game day roster.

Welcke’s two-goal performance earned the German native the first star, while her teammate Ava Stevenson snatched up the second star. New Brunswick’s Melanie Drost took home the third star as a result of her terrific goal in the third.

The Black Bears women’s ice hockey team takes on Quinnipiac University to open their regular season slate of games this Friday Sept. 23 and Saturday Sept. 24 at the Alfond Arena, at 6 p.m. and 2 p.m. respectively.