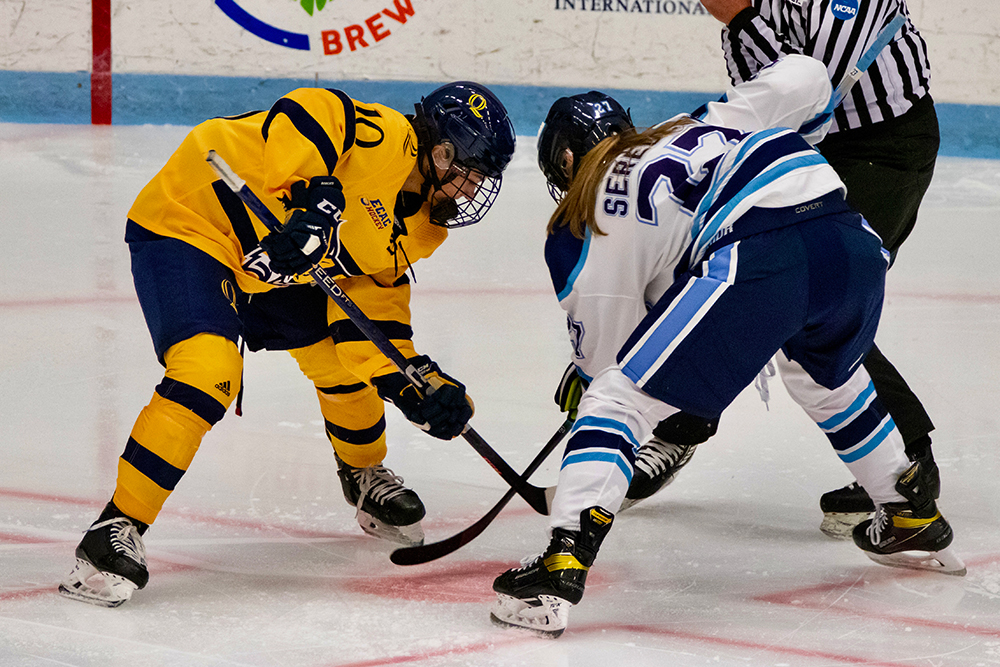 The University of Maine women’s hockey team kicked off their 24th season as a Division I program on Friday night. The group welcomed the #No.8 ranked Quinnipiac Bobcats to the Alfond. This was new head coach Molly Engstrom’s first regular season game as a collegiate head coach. Engstrom was a former member of the USA Olympic silver medal-winning team in 2010. In addition to this, she played for the University of Wisconsin from 2001-2005 and professionally from 2008-2017. She replaced Richard Reichenbach who spent seven seasons as the head of the program.

The opening night saw UMaine lose in heartbreaking fashion with a 3-2 overtime loss in a very tight and exciting game. The scoring started with the Bobcats’ senior center Sadie Pert netting one goal halfway through the first period. The first period remained scoreless while Quinnipiac controlled the pace of play, time of possession, shots on goal, and faceoffs. The Black Bears started the second period on fire after assistant captain Ida Kuoppala scored 56 seconds into the frame, with Rahel Enzler and Grace Heiting getting the assists.

UMaine controlled the tempo for the majority of the period by edging out Quinnipiac for shots on goal (10-9), faceoffs (10-7), and not committing a penalty in the second period. Two of those penalties happened within 30 seconds of each other and resulted in a five-on-three opportunity that Black Bears capitalized on. Second-year center Mira Seregely scored to get UMaine the lead for the first time of the day, with Kuoppala and Olivia King on the assists.

While UMaine dominated the middle frame, the Bobcats took over the third. They outshot UMaine 13-4, with one of those shots getting behind the Black Bears’ netminder Jorden Mattison. The tying goal came with 10 minutes left in the period when Lexie Adzija collected a pass from Olivia Mobely and slammed the puck home. Both teams had solid scoring opportunities in the final few minutes but both Mattison and Bobcats fifth-year goalie Logan Angers came up with massive stops.

The game went into overtime and the teams went rapidly up and down the ice. With 10 seconds left, Quinnipiac won the faceoff and Olivia Mobely fired a shot behind Mattison to end it. The Bobcats dominated the shots on goal in the extra time with a commanding seven to two difference. The end-of-game statistics heavily favored Quinnipiac with the Bobcats outshooting the Black Bears 36-20 and winning 56% of faceoffs. While it was a tough and heartbreaking loss, a lot has to be said for UMaine competing so well for so long with a team that has national championship tournament hopes this season.

Quinnipiac was able to keep the number of shots to a minimum due to their strong forechecking presence in the offensive zone. They controlled the majority of the time of possession, and when UMaine was able to get control of the puck, they were not given much time or space because of the Bobcats’ stifling defense. UMaine was able to get some quality opportunities with a net-front presence. However, this left a lot of 3v2 or 2v1 rushes going the other way. Another reason why the Black Bears couldn’t add more onto the scoreboard was because of the performance of Angers and her ability to not give up many rebounds for UMaine to try to slam home. The Bobcats had plenty of fabulous breakouts out of their own zone with crisp passing and strong and fast skating. That is something that UMaine will have to work on going forward to compete with these upper echelon teams.

UMaine’s roster has plenty of new faces with five first-years playing considerable amounts of playing time on the ice. Ava Stevenson, Ashley Bialis, Anna Caumo, and the Welcke twins (Lilli and Luisa) all made an impact on the game. UMaine has started to revamp its program by cleaning out its coaching staff and bringing in new players. With only 12 players on the roster who are upperclassmen, the Black Bears do have an aspiring future ahead. This being said, they still have a lot of older and experienced talent on the roster already. Enzler and Amalie Andersen were named to their country’s Olympic team this past February (Germany and Denmark respectively.) Other older key contributors to the team include the aforementioned Kuoppala, Seregely, Heiting, and Mattison, as well as star Nicole Pateman, Emma Lange, Elise Morphy, and King on defense. On the offensive side of things, key returners include the Trimper twins – Ally and Morgan (the captain) – and Alyssa Wruble rounding out the deep and talented roster.