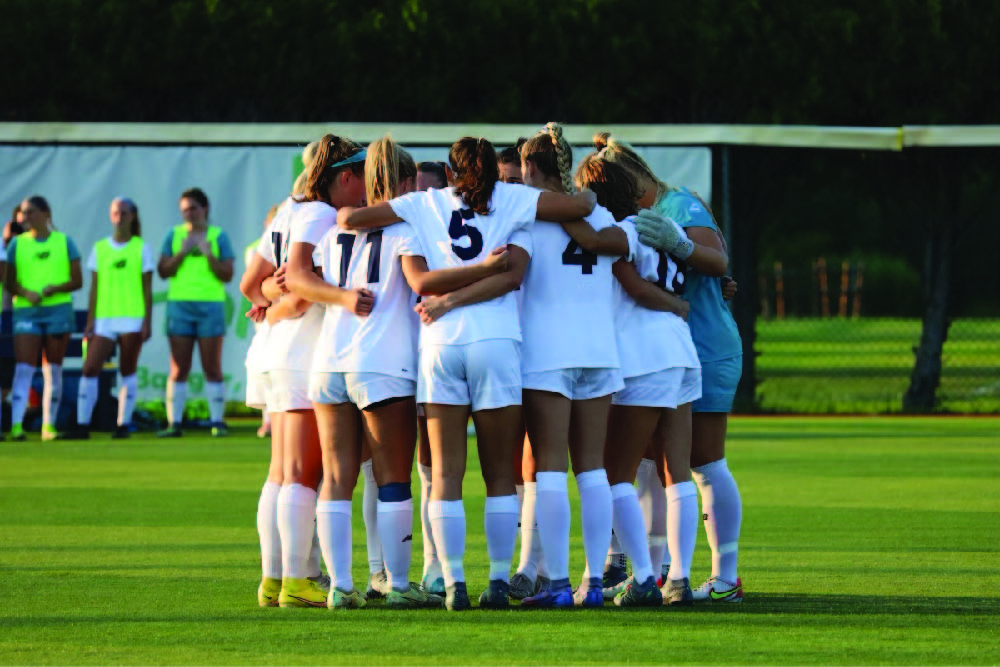 In an exhibition match to prepare the squad for the upcoming season the University of Maine women’s soccer team welcomed the University of New Brunswick (UNB) Reds to the Mahaney Diamond this past Wednesday. Having been undefeated up until their previous match against Quinnipiac University, the team was certainly on a high and looked to provide opportunities for the majority of their roster to see game action. This included reigning America East offensive player of the week, fifth-year midfielder Birte Speck and former America East rookie of the week, first-year forward Jordan Pinette.

Speck’s award came from a decisive game-tying goal in UMaine’s contest against Merrimack as well as collecting a slick assist on teammate Susannah Gaines’ first goal of the season. Pinette’s award came on the heels of her performances against Saint Peter’s University, Merrimack and Bryant University, where she was able to record two assists from exceptional corner kicks as well as managing to fire off two shots, with one of them on frame.

UNB themselves were in the midst of their preseason schedule, though this match marked the end of their four game warm-up period. The traveling group were looking to end their preseason on a high note.

Early on in the match, the Reds managed to keep up the pressure and closed in on the University of Maine’s longtime goalkeeper, fifth-year Kira Kutzinski. However, great defensive work from the Black Bears center-halves blocked any attempts UNB had at scoring.

Fifth-year UMaine forward Saylor Clark had a great attempt at a goal before her looping left-footed shot was forced over the bar by an acrobatic diving save from the UNB goalkeeper, fifth-year Brynn Nash. Clark kept her foot on the pedal and found herself in the middle of another scoring opportunity when one of her cannons for a leg produced a shot that echoed over the bar only a few minutes later.

As UMaine kept the tempo high, first-year midfielder Madison Michaud came inches from grabbing the lead when she found space in the box before her shot careened narrowly over the bar, keeping the score locked at zero. The Reds quickly countered, pouncing on some slow passing from the Black Bears to spring an odd-manned counter attack just moments later. Third-year striker Julia Currie drove a low shot toward the far side of the UMaine goal before the imminently advancing Kutzinski cut down her angle and redirected the shot out of play.

It became quickly apparent why Pinette recently won the America East rookie of the week award once she entered the game. Her dribbling display down the wing with under 10 minutes to go in the first half saw her round the keeper before putting a shot on target that rang off the post and out. Pinette was again at the forefront of the UMaine attacking effort but her next chance was saved by Nash just a few minutes later.

Pinette’s dribbling was on display yet again in the thirty-eighth minute when she navigated her way through the Reds’ defensive line and coolly slotted home the opening goal of the competition. The score remained the lone goal until the fifty-third minute of the contest when UMaine’s fourth-year midfielder Olivia Chalifoux unleashed a line drive strike into the side netting from deep outside the box to double the lead for the Black Bears.

In a near picture-perfect recreation of the play prior, first-year forward Gillian Rogers chipped a sublime ball over the head of UNB’s keeper just to have her effort collide with the post and bounce back out into play. The Reds continued to push for their first goal, but the ever-prompt Kutzinski smothered a chance at the feet of an opposing attacker just outside her area with about 20 minutes to play. Kutzinski came to UMaine’s rescue yet again only a few moments later, fighting her rightward-bound momentum to make a strong left handed save and preserve the Black Bears’ two-goal advantage. Rogers came close in the final moments to scoring her first goal of the contest, but her chance from in close glanced off of her boot and just over the bar, effectively marking the end of the competition.

UMaine won the contest with a score of 2-0. The win is vital for the team, as they look to make a deep run in the America East tournament this season. The Black Bears will welcome the New Jersey Institute of Technology to the Mahaney Diamond next Sunday at noon.

The new engineering building: a price to pay for beauty
2022 NFL Preview