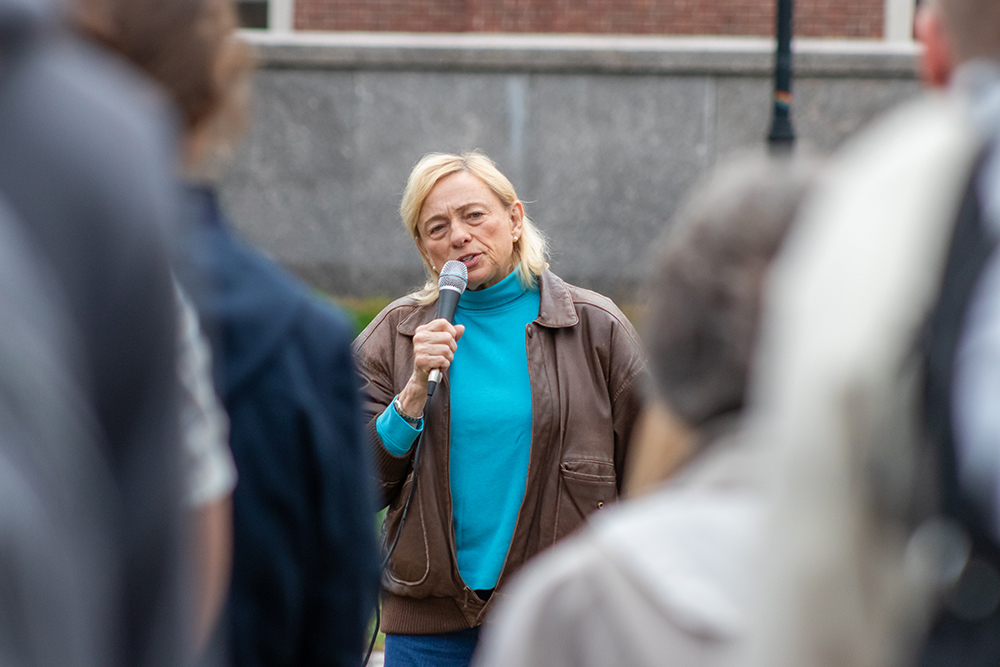 Current Governor Janet Mills visited the University of Maine campus on Tuesday to rally the student body to vote in the upcoming election.

The Maine Campus had the opportunity to ask Mills a few brief questions. Mills reflected on immigration into Maine, what her administration is doing to keep young people in the state and improving the state’s relationship with the Wabanaki people.

Last spring, the legislature halted LD 1626, a bill that would reinforce tribal sovereignty and grant the Wabanaki tribes’ full decision to regulate hunting, fishing and land use on their territory.

The following questions are a collection of concerns expressed by the student body.

Q: What are you doing to promote immigration into the state and retain the young population?

Mills: Well, first of all, we [the state] have the seventh highest in-migration rate in the country. We talk about the rain drain all the time. We have talked about it for decades, but people actually are coming here. The Boomerangs (Boomers) are coming back, and people are moving here, not just to be closer to their grandchildren. It’s young families and younger people who are excited about the green economy and want clean energy jobs and people raising their families here. I’ve met many of them, and I’m excited about that.

When it comes to immigration from other countries, we have got to change the rules; change congressional legislation to allow people, asylum seekers here illegally, to become eligible for work at a much earlier time. I think our congressional delegation and I are all singing the same tune to Congress and Federal Immigration and Customs. Let these people work within 30 days. Don’t make them wait for months and months and years and years before their application is finally filed and ruled upon. We need them, they need us. They come here through hell and high waters. Literally, jungles and mountains and viscous conditions to escape violence and persecution. They have work experience, certifications and degrees that are valuable to us. We need them to be here, work here. They are here to appreciate our democracy and to contribute their skills to our economy. We need them.

[The Opportunity Tax Credit] is a big deal. It’s one of the most generous student loan forgiveness programs in the country. We worked across the aisle to do that and put it in the budget and enacted it. People should look into that. No matter where they got a degree or what subject they got a degree in, whether it was in-state or out-of-state, if they are paying income taxes in Maine, they get the credit. It’s pretty streamlined now and broadened to be more generous. That’s one thing.

I think Maine has gotten branded in the last few years as being a safe and welcoming state. I want us to stay there. I don’t want to be a state of hatred and bigotry.

Q: What is your administration doing to improve its relationship with the Wabanaki people?

Mills:  First, at their request, we changed Columbus Day to Indigenous Peoples’ Day. Then, I issued a pardon of Don Geller’s. Thirdly, we spent two years revising the clean water standards and putting legislation through the Maine Legislature to establish some of the highest water quality standards in the country for those waterways in parts of the Penobscot River that have special value to the Wabanaki tribal members for sustenance fishing. That was a long haul, much more complicated than I’m making it sound and controversial. Fourthly, we spent several years drafting a bill and revising a bill to allow tribal courts to prosecute non-tribal members who commit domestic violence on tribal lands against tribal members.

Plus, I put some really good people on the Maine Indian Tribal-State Commission, which is designed to have a free flow of information between tribal representatives and state representatives to talk about fish and wildlife rules and economic developments.

We sat down with the tribes this past year and drafted a bill that does require collaboration and communication between the tribes and state government, all departments of state government. It gives them some income tax benefits for tribal businesses, which was a big thing for them. It also allocates to the tribes the ability to do online sports gaming, which is quite controversial and something they very much wanted.

I think my administration has done more to repair the relationship with the roughly 8,000 members of the four Wabanaki tribes than all previous four governors in the last couple decades.

Q: Will your administration be re-addressing LD 1626?

Mills: I’ll see what it looks like. I submitted testimony on that bill before. Others did as well. People have raised a lot of objections to the bill. It’s 44 pages long and addresses gambling in a way that’s inconsistent. I did not want to sign the bill in the current draft this past year. I raised my objections about having territories — big chunks of land in Maine and waters —  that have inconsistent regulations, rules and laws. We breathe the same air. We drink the same water. We use the same waterways, mountains, hills, streams and ocean coastlines.

We got to work together and live together in a compatible way. My problem with that bill, as then drafted this past year, is it will create more conflict and confrontation in litigation. I don’t believe in confrontation. I believe in collaboration and communication.