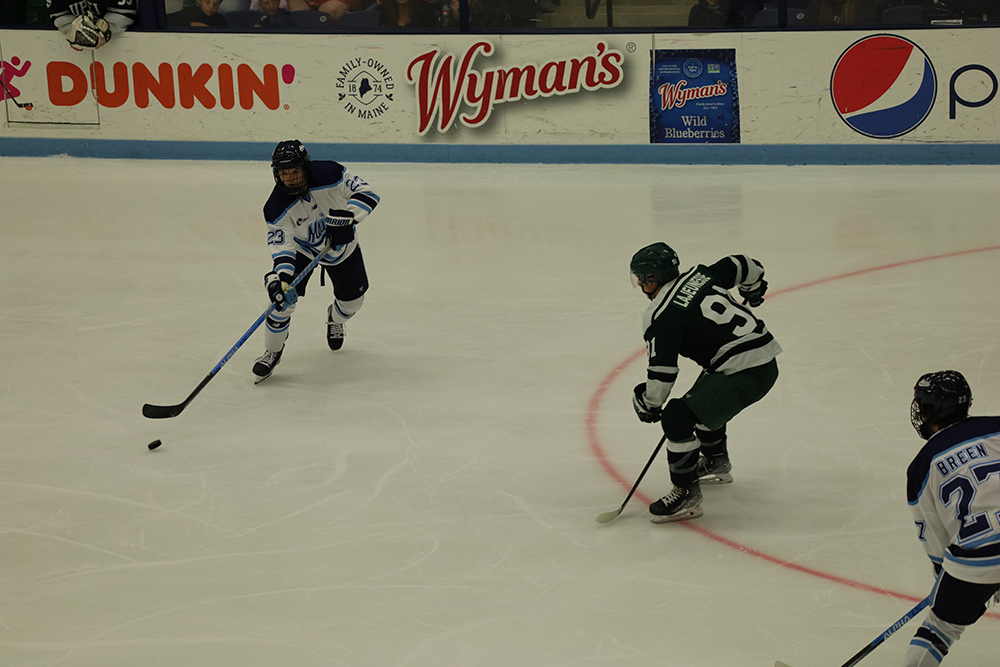 The University of Maine’s men’s ice hockey team returned to the Alfond Arena to kick off yet another season in Orono. After their previous forgettable season, the Black Bears look to make this one for the record books. Head coach Ben Barr has returned for his second season at the helm of the blue and white, bringing in a bevy of new contributors to his team for the year ahead. Over 10 new players were brought in to fortify a group that saw key contributors, including team captain Jack Quinlivan, graduate this past year. Last year’s goaltender Matthew Thiessen opted to transfer to the hockey powerhouse University of Minnesota-Duluth, opening the door for the incoming third-year transfer from Clarkson Jacob Mucitelli.

While the Hockey East preseason poll ranked UMaine dead last in its rankings, the team is optimistic about their future.

“That simply means there’s nowhere else to go but up from here,” Jeff Mannix, the television voice of UMaine Men’s Hockey, said on the call last night.

The Black Bears ended their 2021-22 season at the bottom of Hockey East and continued the losing trend that has been developing ever since the departure of current Boston Bruins starting goaltender Jeremy Swayman at the conclusion of the university’s COVID-19 shortened season. Over the past two seasons, Barr’s adopted group of primarily former head coach Red Gendron’s talent seemingly haven’t been able to find enough footing to make any headway. However, with a slew of hungry skaters taking to the ice this year changes are hopefully coming.

Those fresh faces were on full display this past Saturday night as the Black Bears welcomed the University of Prince Edward Isle Panthers (UPEI). UPEI already had this exhibition scheduled, but the fallout from Hurricane Fiona made the trip an absolute necessity. Power was knocked out across the island and only two of the island’s six rinks remained frozen. With hockey season only crawling closer and closer the battle for ice time across those two rinks has to be terrifying.

The battle inside Alfond Arena was a hotly contested bout. With Mucitelli starting in goal for UMaine opposite UPEI’s third-year shot-stopper Jonah Capriotti, the game was underway in front of a packed crowd and a very full student section.

Both sides looked beyond sloppy early on, trading giveaways and slip-ups with penalties getting dished out left and right. 40 penalty minutes were racked up between the two teams when all was said and done, with 12 minutes in the sin bin between both teams in the first two periods. UPEI registered more penalty minutes than UMaine in every single period, but that didn’t translate to an easy win. Capriotti stood tall on the goal-line to deny an early second-period scoring chance for the Black Bears.

Mucitelli was pulled for third-year goaltender Victor Ostman midway through the second, but not before Mucitelli was able to dramatically deny a Panther two-on-one rush when he flashed his leather and snagged the shot straight out of the rafters. At the same time, Capriotti gave way to first-year tender Lucas Fitzpatrick to close out the remainder of the battle for UPEI. Fitzpatrick’s time on the ice quickly turned sour when a picture-perfect feed from UMaine’s first-year forward Reid Pabich met the stick of first-year Killian Kiecker-Olsen in the blue paint. The shot found the back of the net, putting the Black Bears up 1-0 with one period to go. Ostman showcased some heroics as time expired, stonewalling UPEI’s captain third-year Troy LaJeunesse on a breakaway opportunity.

Penalties became an even more pressing issue for UPEI in the third, having to defend against  multiple five-on-three power plays while UMaine’s forwards continued to crash the net unabashedly. UMaine’s new captain, graduate student Jakub Sirota, came the closest to doubling his side’s lead halfway through the third when his one-timed bomb rang the crossbar and rattled over the glass and out of play. UMaine’s second-year defenseman Sam Duerr did his best Sirota impression with a minute to go in the contest, striking the post again with a shot of his own. As time ended, UMaine took home a comfortable 1-0 win in front of a raucous crowd.

UMaine plays next in the icebreaker tournament out in Colorado this upcoming weekend where they will take on Air Force and the No. 1 nationally ranked University of Denver Pioneers to round out their preseason schedule.