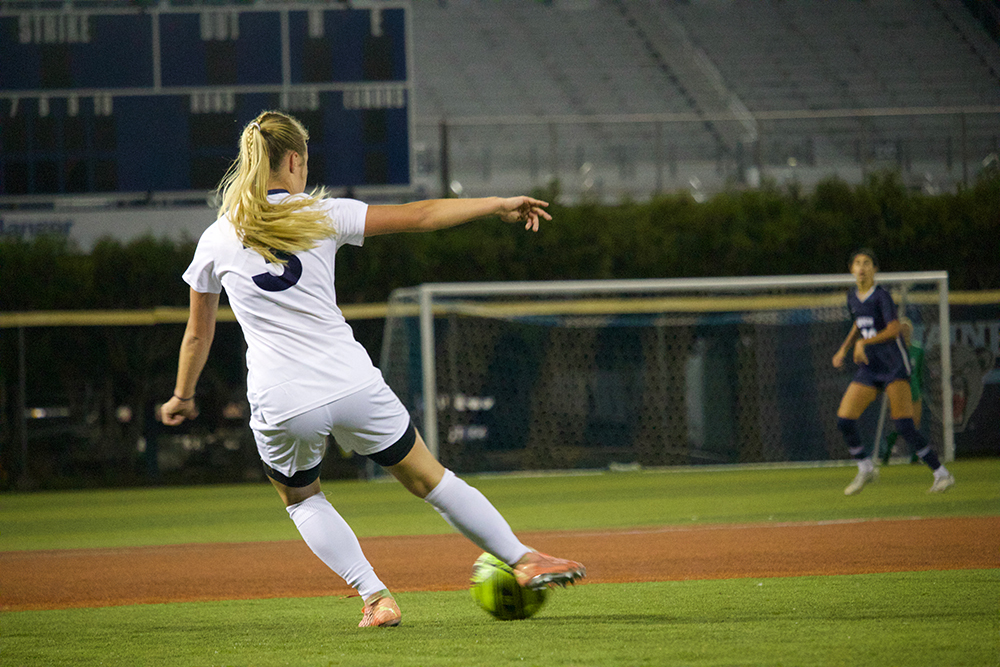 With the America East regular season winding down, every game matters more and more to those soccer teams in the hunt for a playoff berth. At the Mahaney Diamond this past Thursday, that urgency was more than felt by head coach Scott Atherley and his team in their match-up against the University of Massachusetts Lowell. The Black Bears have been on a blistering run this season, remaining undefeated at home and in America East conference play since the beginning of the school year.

Rolling into this matchup with a 7-2-4 record overall, the University of Maine soccer team sat in second place in the conference trailing only Binghamton University, as they’ve been able to play an extra game compared to the Black Bears. The Lowell River Hawks were only two spots behind UMaine in the table, separated only by the University of New Hampshire.

Early on in the matchup, it was the River Hawks that took the reins and dictated play. After forcing play down the throats of the home side and peppering UMaine’s grad student goalkeeper Kira Kutzinski, Lowell found their breakthrough by way of grad student Emily Nelson. A corner kick in the 18th minute caused a ruckus in UMaine’s box before Nelson was able to direct the ball into the short-side netting behind Kutzinski, taking the lead with a whole lot of action still to go. The goal was Nelson’s first of the season.

While UMaine was being outshot 7-1, only a few minutes following the goal a bevy of substitutions reinvigorated the girls on the pitch and turned the tides of the game shortly before and immediately after the halftime whistle. First-year Jordan Pinette kept up a pace that she has maintained since the pre-season, proving her abilities and backing up the numerous America East awards she’s received these last couple of months.

That high-intensity style of play became precisely what the Black Bears needed when, on a corner kick of their own in the second half, magic happened. As the set piece rattled around in the box, UMaine’s second-year forward Abby Kraemer stepped up and headed the ball over the outstretched arms of Lowell’s keeper, third-year Taylor Burgess, to knot the contest up at 1-1 with 26 minutes to play. Kraemer’s fifth goal of the season sent the Mahaney Diamond alight, as the ensuing cheers could be heard across campus.

Just as quickly as she scored, UMaine took a hold of the possession and refused to give it up. Dominative controlled passing allowed UMaine to march up the field unlike they had in the first half, making Burgess’ life harder and harder with every counter-attack. The River Hawks weren’t willing to roll over for their conference rivals though, as third-year forward Chloe Layne continued her assault on Kutzinski, registering five shots with four of them hitting the target when all was said and done.

Layne’s presence wasn’t enough for her side to reclaim the lead however, as Kutzinski stonewalled Lowell over the second half to the tune of a stellar ten-save performance in the 1-1 draw. The German-born keeper was instrumental in winning not only this game, but clinching a playoff berth thanks to this result. A playoff spot earned with two games still remaining is a monumental achievement when you consider the preseason rankings had UMaine fighting for the very last playoff spot in the conference.

To make a good situation even better, if the Black Bears are able to defeat Bryant University in the following competition, they will have the opportunity to host the America East playoffs at Mahaney Diamond, a significant advantage in their quest for a title. They will take on Bryant in Rhode Island on Sunday, Oct. 23 at 1 p.m. to close out their regular season slate.