Is Putin going to go nuclear? 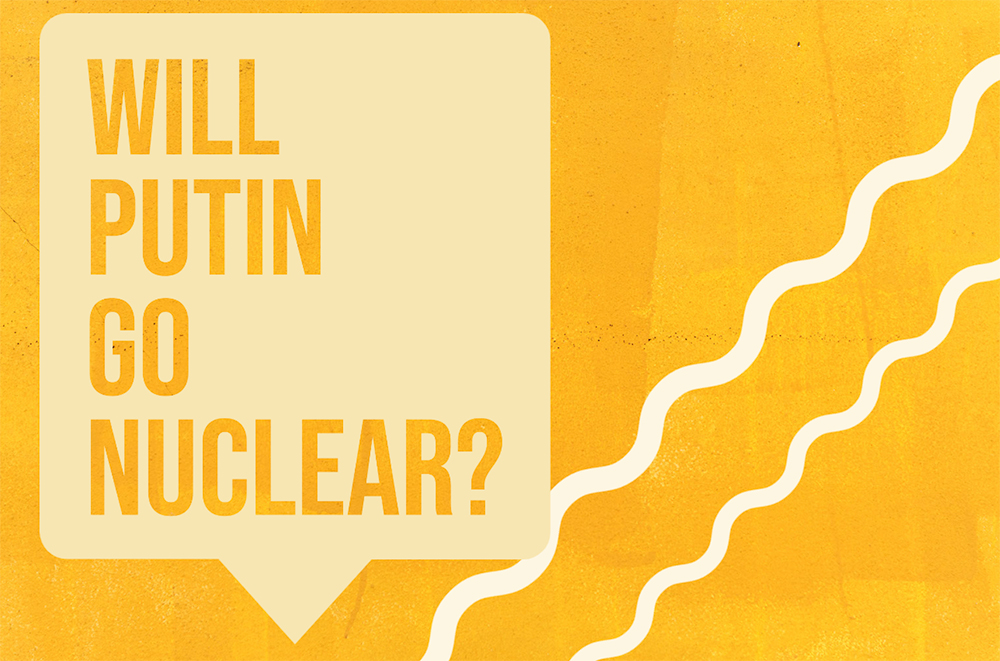 After all of Russian President Vladimir Putin’s reckless nuclear saber-rattling over the past year or so is he finally close to acting on his threats? If so what means would he use to deploy nuclear weapons? Where and when would he deploy them on the battlefield? These are just some of the questions many Ukrainians, Americans and the rest of the world’s citizens have surely been asking themselves recently and for good reason. In September, Putin delivered a prerecorded address where he said that his readiness to use nuclear weapons is not a bluff.

President Joe Biden recently worried aloud about “nuclear armageddon” while warning that the world is the closest it’s been to nuclear blows since the Cuban Missile Crisis in 1962. The infamous Bulletin of the Atomic Scientists’ Doomsday Clock is the closest to midnight it has ever been since its creation in 1947.

So, should you be worried? Without hyperbole, yes you probably should be. Biden received backlash for his candid remarks regarding Putin’s nuclear ambitions, but in reality the public should probably be more concerned than they currently are.

According to Harvard Kennedy School professor Matthew Bunn there is an approximate 10 to 20% chance that Russia deploys a nuclear weapon in Ukraine. Considering the consequences of such an unprecedented course of action even a slight change in it coming to fruition is both unacceptable and worrisome.

Russia would be most likely to use nuclear weapons in the face of imminent defeat or some form of inescapable international embarrassment. Defeat for Russia could come in the form of a total loss of the Donbas region in eastern Ukraine or further symbolic attacks from Ukraine such as the bombing of the bridge connecting Crimea to Russia. As Putin becomes cornered he will escalate his plans to win his war.

We’ve already seen the Russian military commit countless war crimes in Ukraine by means of purposefully targeting civilians and civilian infrastructure, using torture and mass executions. They’ve already proven their coldness and their cruelty, so would further escalation really be out of the question?

As the Ukrainian military continues to be victorious and reclaim their stolen land, nuclear deployment becomes more and more likely. This is especially true since many parts of Russian-occupied eastern Ukraine have been illegally annexed through sham referendums where Russia now officially views these regions as part of their country and within their sphere of protection.

Experts predict that Putin is most likely to use a tactical nuclear weapon in Ukraine. According to CBS News these are designed for limited strikes against relatively close specific targets like command posts instead of destroying cities from afar.

If Putin fulfills his grim threats, the international community will need to band together and take swift action. Such a malicious and reckless provocation would change the face of warfare forever. To respond some experts and high-ranking personnel such as former CIA director and Secretary of Defense Leon Panetta suggest militaristic punishments.

Additionally others suggest further economic isolation and seizing the country’s foreign reserves. The Biden Administration continuously uses deliberate and strategic ambiguity when it comes to a response but they also need to consistently issue firm warnings against nuclear war.

If the world doesn’t respond a new precedent will be set; bully nations looking for imperial conquest will think that nuclear weapons are acceptable tools to gain more land. What message would this send to China as they eye Taiwan? How would that look to North Korea?

The world needs to stand up to these aggressors because they need to know what the consequences are. Will they get just a slap on the wrist as Putin has for his past transgressions, or will there be real and forceful pushback? Strength comes in numbers; if Putin goes nuclear Ukraine and the world will need all the strength they can get.