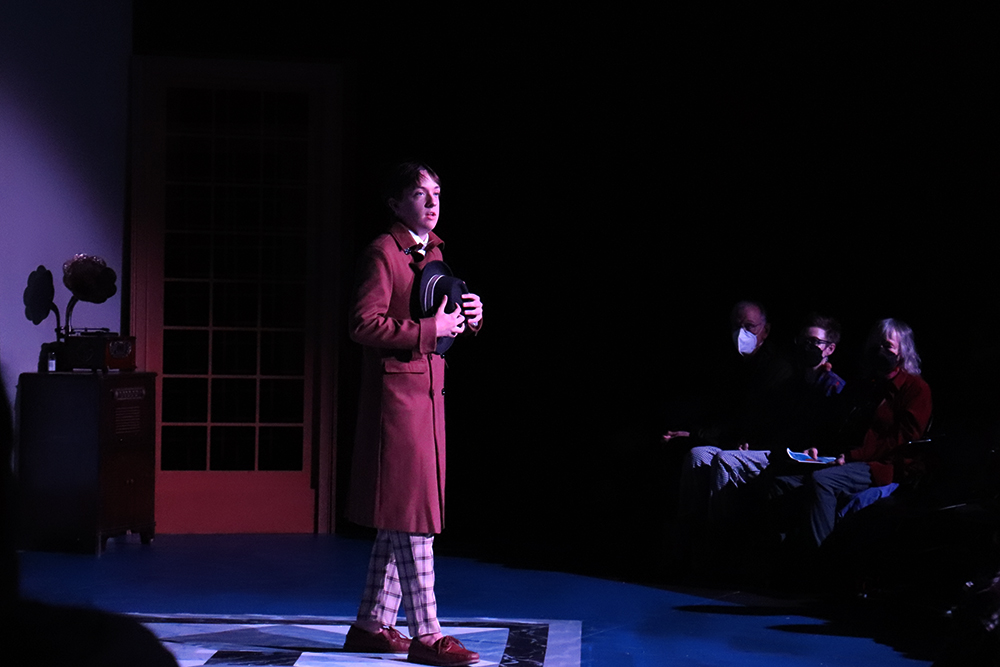 Over the past two weeks, the University of Maine’s School of Performing Arts has put on “Melancholy Play” at the Hauck Auditorium. The show, written by Sarah Ruhl and directed by Dr. Rosalie Purvis, was put on Friday and Saturday nights at 7:30 p.m. and Sundays at 2 p.m. over the weekends of Oct. 14 and Oct. 21.

The show centers around Tilly, played by Courtney Harding. Tilly is plagued by a melancholy nature that causes those around her to fall in love with her. Those in love with her are: Lorenzo the unfeeling therapist, played by Martin Guarnieri; Frank the tailor, played by Elijah D’Aran and Francis the hairdresser and her partner Joan the nurse, played by Olivia West and Clare Capuzzi respectively.

This group makes up the cast along with the cellist Julian, played by Luiz Da Silva. Silva’s playing accompanies the entirety of the one-act show. The music was composed by Benjamin Walker. Two of the songs that were performed within the show were created in collaboration with Walker and the cast.

Purvis spoke highly of the cast and crews’ ability to come together.

“Actors are collaborators,” Purvis said. “I’m the lead archaeologist, I tell people where to dig but they’re the ones doing the digging, getting their hands dirty. If I were to not listen to them I would miss something amazing.”

Apart from the cast and musicians, the crew also included a number of other members. Bell Gellis Morais, the assistant director and fight captain, is another member a part of the play. According to Purvis, Morais was more of a co-director with how much they collaborated.

There was also Sophie Bilodeau, the stage manager and prop master.

“It’s her first time stage directing but you could never guess because she’s amazing at it,” Purvis said.

The set of the show featured a small stage on the same level as the audience, leaving room for the characters to move about and interact with the audience at times. The backdrop was painted sky blue with clouds and had the indent of an almond which acted as a window later on. Projections displayed varying images on the back panel, supplementing the scenery and displaying a description of the scene.

This is not Purvis’ first time directing “Melancholy Play.” She has directed it multiple times in the past, with various age groups and cultural settings. One of her times directing this play was while she was in India. While she does not tend to do projects multiple times, she explained that she has a strong liking for this show.

Purvis chose the show after looking at multiple shows with an LGBTQ literature class she taught last spring. The class all resonated with this play in particular.

While the show has elements of queer relationships, it focuses less on that aspect as it does on mental health and relationships in general.

The show touches on the characters’ struggles with sadness and depression. In the later part of the play, one character becomes depressed and turns into an almond, completely unresponsive to her loved ones.

“We all struggle with difficult emotions and it can lead us to isolate ourselves,” Purvis said.“In some ways, it really reflects the college community, everyone sorta falling in love with each other, that can be what college feels like.”