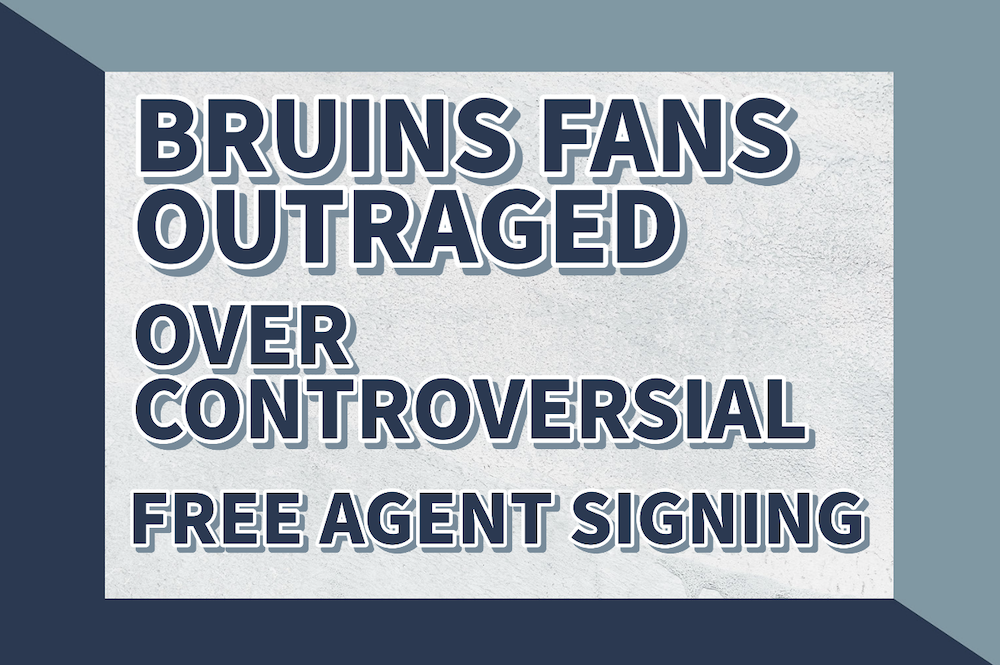 The Boston Bruins have come out of the gates strong in 2022 with a 13-2 start. However, the relationship between the Bruins’ front office and the fanbase remains strained. The tension was recently exacerbated by the signing of free agent Mitchell Miller, who had previously been released by the Arizona Coyotes shortly after he was drafted due to evidence of Mitchell’s serial abuse of a Black, disabled classmate that began in elementary school.

Miller began his professional career as a standout defenseman in the developmental USHL league. He committed to play D1 college hockey at the University of North Dakota in May 2020 and was drafted by the Coyotes in the fourth round of the NHL draft just a few months later. All was looking up for Miller, who was set to play at a top hockey school before joining the NHL.

Just 20 days after the NHL Draft, The Arizona Republic released an in-depth report on Miller’s past detailing the abuse that Miller and his classmates were responsible for inflicting on classmate Isaiah Meyer-Crothers. The Republic’s report included specific details regarding Miller’s abusive behavior, which started as early as first grade. Miller and his classmates repeatedly physically assaulted Meyer-Crothers on the school bus and constantly used degrading racial slurs. They spat in the face of Meyer-Crothers and demanded that he “go pick their cotton.”

Consequences for Miller’s repeated behavior were assessed when he and a classmate were found delinquent in an Ohio juvenile court for manipulating Meyer-Crothers into eating a piece of candy they had wiped in a urinal, and repeatedly using the n-word.

After the report surfaced Miller officially apologized to each of the 31 NHL franchises at the time but never apologized directly to Meyer-Crothers or his family beyond the court-mandated apology letter that Miller read after his court sentencing.

Shortly after the release of the report and Miller’s public apology, Joni Meyer-Crothers, the mother of the victim, wrote a letter addressed to the Arizona Coyotes. In the letter she claimed that Miller’s classmates apologized after the incident but Miller himself refused to show remorse for his actions. This testimony is supported by an Ohio court magistrate who concluded that Miller did not regret his actions and was more concerned with the health of his reputation in the wake of the incident.

After the release of the exposé the Coyotes’ initial public stance was that they would offer Miller a second chance. However, public pushback became too strong and they revoked their draft rights to Miller. Shortly after the University of North Dakota cut Miller from their team.

In the years following the release of the report Miller has continued to play in the USHL. Recently, he was signed as a free agent by the Boston Bruins, which drew massive waves of criticism from not only the fanbase but current Bruins players as well. Captain Patrice Bergeron admitted that most in the Bruins’ locker room were displeased with the signing.

After the Bruins dropped Miller, Bergeron commented on the front office’s new decision.

“I’m glad that we were heard, I guess,” Bergeron said.

Another wrinkle in the situation arose when Miller’s agent appeared on a talk show claiming that Miller and Meyer-Crothers had spoken on the phone before Miller signed his contract.

“Mitchell wanted to make sure, and they spoke on the phone, that he had Isaiah’s blessing,” Eustace King, Miller’s representative, said.

Meyer-Crothers released his own statement in response to King’s allegations.

“I just wanted to tell everyone – when Mitchell says we’re friends, it isn’t true,” Meyer-Crothers said.

Bruins fans and fans across the NHL took to all forms of communication to spread their displeasure with the signing, especially on social media. Eventually Bruins president Cam Neely started feeling enough heat to officially terminate Miller’s contract.

Hockey fans across the country can breathe a sigh of relief now that a remorseless abuser has been denied his chance to play in the league, but the incident at large has further damaged the relationship between Bruins fans and the team’s front office.