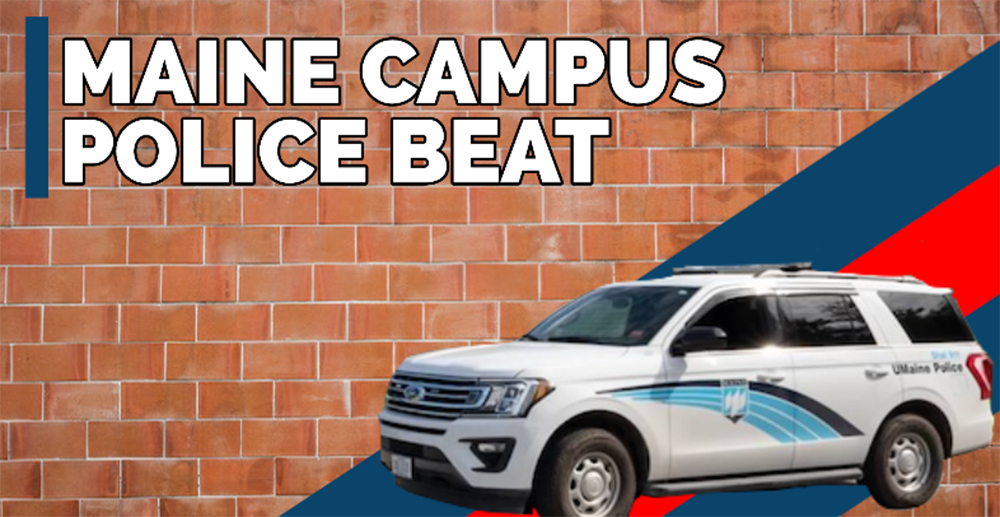 At 1:40 a.m. the University of Maine Police Department (UMPD) and the University Volunteer Ambulance Corps (UVAC) arrived at Patch Hall for an intoxicated male that fell asleep. The person refused transport.

At 2:03 a.m. officers responded to a report of an intoxicated student on the fourth floor of York Hall. The individual refused transport.

At 2:15 a.m. UMPD and UVAC responded to a medical call at Aroostook Hall after a person reported feeling ill. However, they refused transport.

At 4 p.m. officers took a theft report at Shibles Hall. A bike valued at $380 was stolen.

At 5:05 p.m. UMPD and UVAC arrived on the second floor of Cumberland Hall for a sick individual. The person was transported to St. Joseph’s Hospital.

At 10:14 p.m. UMPD and UVAC responded to a medical call on the third floor of Aroostook Hall. The person was transported to the hospital.

At 10:30 a.m. officers responded to a report of people darting in and out of the road on College Ave. Thirty to forty people were waving signs advertising a pancake breakfast.

At 5:08 p.m. officers took a motor vehicle crash report from the Hilltop Lot.

At 5:37 p.m. UMPD and UVAC responded to College Ave. for a report of an unconscious person. The individual was transported to St. Joseph’s Hospital.

At 11:30 p.m. officers arrived at Cumberland Hall after receiving a vandalism report.

At 3 p.m. UMPD responded to Fogler Library for a report of criminal mischief. There was graffiti in the men’s room but it was already removed upon the officers’ arrival.

At 5 p.m. UMPD and UVAC arrived at Bennett Hall for a medical call. An unconscious male was transported to Northern Light Eastern Maine Medical Center.

At 2 a.m. officers on patrol in Jenness Hall smelled marijuana and found two subjects smoking. The students were referred to conduct.

At 9 a.m. UMPD received a report of two dogs locked in a car. The officers found that the car was running, and the dogs were healthy and safe.

At noon officers responded to the Belgrade parking lot for a report of an erratic vehicle doing donuts in the parking lot in the freshly fallen snow.

At 3 p.m. UMPD assisted the fire department with putting out a dumpster fire near Taylor Hall.

At 2:20 p.m. officers received a medical call at the Bear’s Den. The individual refused transport.

At 5 p.m. UMPD took a late motor vehicle crash report that occurred on Nov. 14 in the Collins Center for the Arts parking lot.

At 7:25 p.m. UMPD and UVAC responded to a medical call at Cumberland Hall. The person refused transport.

At 8:17 p.m. officers received a medical call at the Maine Bound Adventure Center for an injured person. They were transported to St. Joseph’s Hospital.

At 9:08 p.m. UMPD arrived at Knox Hall for a report of criminal mischief. A student explained that someone kicked their door to the point that the lock system no longer worked.

Graphic by Liv Schanck
The Mitchell Center explores the…