School of Policy and International Affairs hosts debate: Has democracy lost to autocracy as a result of technology?

Home /News/Campus & Community News/School of Policy and International Affairs hosts debate: Has democracy lost to autocracy as a result of technology? 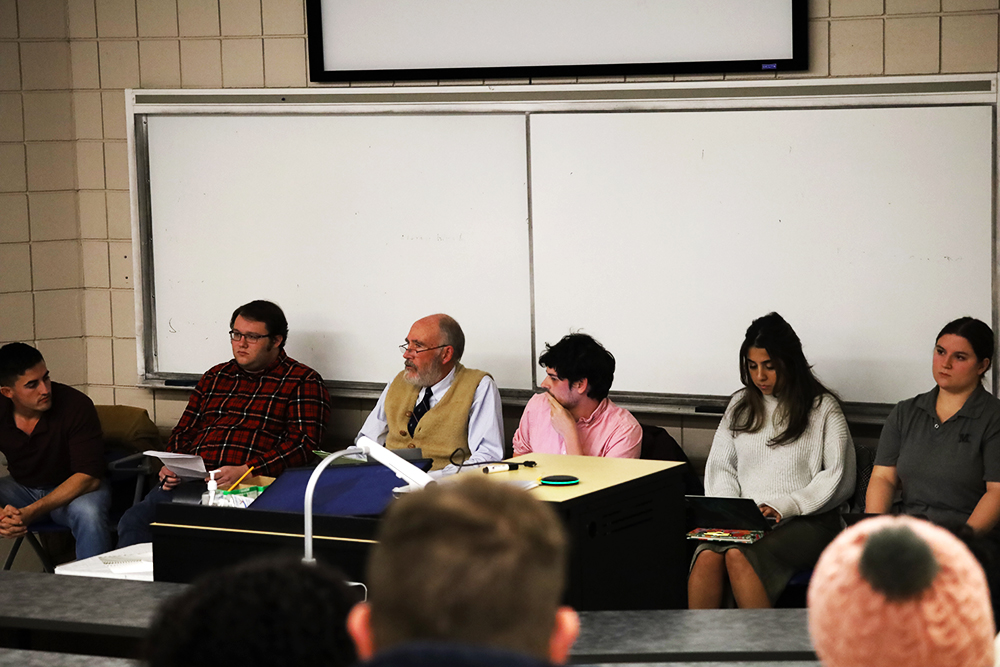 The University of Maine’s School of Policy and International Affairs hosted its annual debate on Nov. 17. Several graduate students discussed whether technological innovation is the reason that democracy has lost to autocracy. Ultimately, the affirmative team won.

Dr. Kenneth Hillas, adjunct professor of international affairs and the moderator for the debate, laid out the rules for victory. Whichever team convinces more audience members to switch their initial opinions of the debate statement wins.

The affirmative team began the debate.

“In 2021, last year, the world experienced the lowest levels of democracy we have seen in at least 30 years,” Mary Giglio, a graduate student in SPIA, explained. “In fact, the world has not recorded so few democratizing states since 1978, with only 15 democratizing countries last year. [That’s] just 3% of the global population. This decline in democracy can be attributed to the rapid advancement of technology in recent years, technology which facilitates surveillance and repression by autocratic governance.”

Giglio, joined by other graduate students Quil Kibak and Anosha Raziq, argued that digital surveillance makes it easier for autocratic governments to impose fear and repress their citizens. If citizens feel as though they are constantly watched, their behavior is modified. Social media and the internet also allow these regimes to quickly identify opposition and quell it.

The supporting team brought up examples and case studies of citizen surveillance in China, Russia and Iran. In China, the Great Firewall — legislation and technologies created by the Chinese Communist Party meant to censor the internet — has existed since 2000. Russia surveils phone calls and internet traffic. According to Giglio, evidence shows that Russia created disinformation campaigns that affected the 2016 presidential election in the United States.

“A final example is Iran, where protests against the two radical regimes are in full swing. Protesters feared that the government would use cutting-edge facial recognition technology to identify and punish them,” Giglio stated. “Additionally, the Iranian government is actively trying to create its own nationwide intranet that would be separate from the global internet and allow it to maintain much stricter control over what its citizens can see and share, which will negatively impact protesters’ abilities to communicate and organize democratic protests.”

The disagreeing side consisted of Ryan Kirkpatrick and Dan O’Neill, who presented an equally convincing argument.

“It [technological advances] has actually bolstered democracy,” Kirkpatrick said. “The Pew Research Center, in a 2018 poll, [reported that] over two-thirds of Americans said that the internet both strengthens political advocacy and serves as a legitimate avenue for pursuing actual tangible change.”

Kirkpatrick gave the example of the teenager who recorded the death of George Floyd in Minneapolis in May 2020, triggering nationwide protests. He also discussed Estonia and the nation’s advanced technological infrastructure that helps further citizen participation in the electoral process. According to Kirkpatrick, cell phones allow the general public to be activists and citizen journalists.

“Power is no longer solidified to the hands of the regime. Instead, cheap technology can turn anybody into a writer, a militant, whatever is needed to fight against autocracy,” Kirkpatrick said.

In Myanmar, rebels can 3D print firearms for less than $100 to fight their militant government. This team also mentioned that without the use of social media and cell phones, the protests in Iran after Mahsa Amini’s death would not be so widely known internationally and even nationally.

O’Neill mentioned that the opposing argument failed at proving two things: democracy has definitively lost, and it failed due to technology. According to O’Neill, we currently live in a democracy, so it clearly has not failed. While his team acknowledges that technology has disadvantages, its benefits far outweigh the drawbacks.

While 18 people disagreed with the statement that democracy lost the world contest to autocratic governments due to technological innovation, the affirmative team won because they convinced three audience members to swap sides.

For more information about future events and the SPIA department, visit https://spia.umaine.edu/.