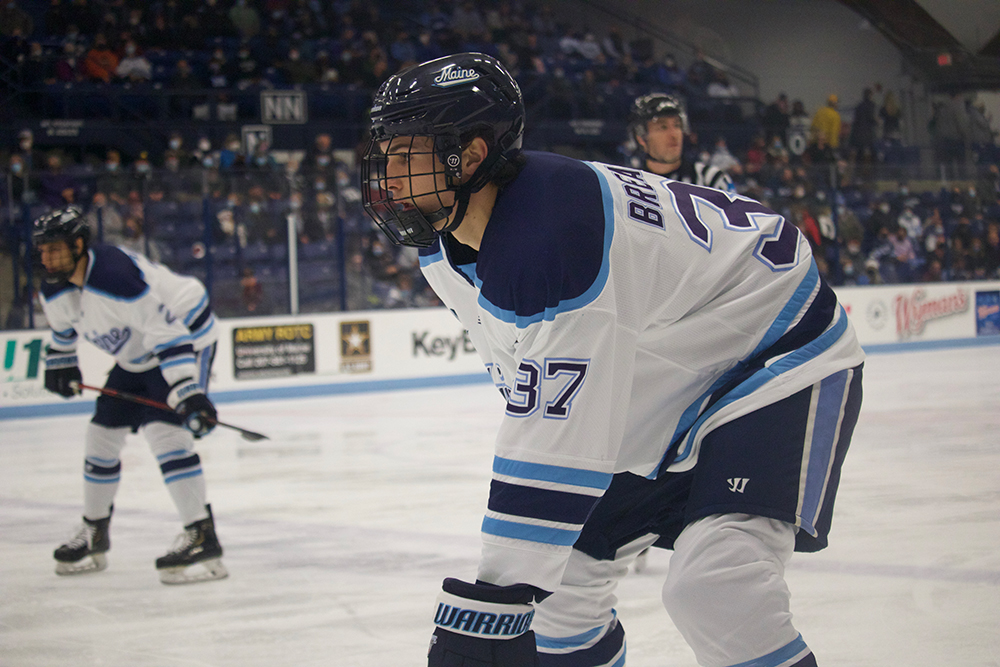 Over the holiday break, the University of Maine Black Bears men’s hockey team welcomed the American International College Yellow Jackets to the Alfond Arena for a midseason battle. In their previous five encounters, Maine has been undefeated, winning by at least two goals in every showing. Unlike the usual scheduling format for most NCAA games in Orono with a contest on Friday and Saturday nights, AIC only ventured to the UMaine campus for one afternoon on Saturday, Nov. 26. With a 2:05 p.m. puck drop, the afternoon sun cascaded across the concourses of the domed arena, shining through doors along the aisles of the Alfond and made the ice practically sparkle.

Coach Ben Barr’s group desperately needed a win, as the team had been riding a five-game losing streak dating back to the first week of November. Early on, however, the Black Bears looked to be doing exactly what was necessary of them. Great puck control and a high forecheck saw UMaine keep the puck in AIC’s end for a majority of the game, and directly led to the first goal of the night. After second-year defenseman David Brazeale’s shot was deflected, first-year forward Felix Trudeau snatched up the loose puck and fed second-year forward Nolan Renwick for a silky snipe over the right shoulder of AIC’s netminder, fourth-year Jarrett Fiske.

The lead proved to be short-lived when about three minutes later the Yellow Jackets managed to find an equalizer. Thanks to a UMaine penalty, AIC’s power play unit was able to pin the Black Bears in their own zone for a change before third-year forward Julius Janhonen potted home the tying tally. It turned out to be the only mistake of what was an otherwise quiet night for third-year goaltender Victor Ostman, who recorded 17 saves from start to finish. The two sides continued to battle out the rest of the first period, but neither team was able to claim the lead prior to the conclusion of the first 20 minutes.

Coming out for the second period was a much different story for Barr and company, that’s for sure. Just over a minute into the frame, first-year defenseman Grayson Arnott slang a wrister on target from the blue line. His shot met the back of third-year forward Lynden Breen who had been tied up in front of the goal, before ricocheting into the net behind Fiske. The score gave the Black Bears a 2-1 lead, and all of the momentum as the minutes ticked on.

UMaine kept their intensity high for the next 20 minutes, stifling the Yellow Jackets time and time again. The Black Bears were flexing their muscles in front of a non-conference opponent, with the most varicose performance from Breen himself. The assistant captain commanded the puck in the offensive zone as there were just over five minutes to play in the second, when he turned on a dime from the right circle and launched a bullet of a shot through the mess of bodies in front of the Yellow Jacket goalmouth to extend his side’s lead to two.

The group was not nearly done with beating Fiske, though. Only a minute later the Black Bears found themselves in an advantageous position again on an odd-manned break. Third-year forward Michael Mancinelli wristed a shot on target that, after bouncing off of Fiske’s pad, found its way onto the stick of third-year forward Donovan Villeneuve-Houle. The Montreal native made no mistakes, guiding his shot into the back of the net to push his group’s lead to a commanding three goals as the third period closed in, and Maine was up 4-1.

While the third period wasn’t as exciting as the previous two, UMaine most definitely was not going to pass up an opportunity to find the back of the net in every period. After fifteen minutes of what must have been torture for the Yellow Jackets, the Black Bears stuck the nail in the coffin with just over five minutes to play in the game. Standard offensive zone cycling allowed first-year defenseman Luke Antonacci to take an uncontested wrister from the blue line. Fourth-year forward Didrik Henbrandt dropped the puck off for Antonacci, before his shot rang the crossbar and hit the twine to extend UMaine’s lead to 5-1. The goal was the first of Antonacci’s college hockey career, and hopefully a sign of things to come in the near future on the Black Bear back end.

Minutes later, the horn in the Alfond sounded as many local residents celebrated a fantastic 5-1 victory over AIC, while a scarily empty student section sat dormant awaiting the return of their local residents. The Black Bears traveled to the University of Vermont this past weekend, returning to Orono with two wins to the tunes of 3-1 and 5-1, and a much better vibe around the group than prior to Thanksgiving break. The Black Bears take the ice for the final time at the Alfond Arena this calendar year this upcoming Saturday, Dec. 10, as they take on the Canisius College Griffins at 2:05 p.m.